You will have to climb on top of a very small hill in just a few seconds. It shouldn't be a problem and since you're very close to your target, you won't get lots. Head on to the bunker. One of the enemy soldiers will probably be standing by the window. Kill him. Enter the pillbox. You should be able to find a medkit here. Pick it up and reload your weapon. Go right. Get ready, because you will have to kill a lot of German soldier in just a few seconds. 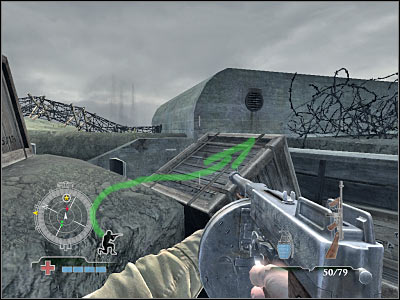 Enemy soldiers are using heavy machine gun posts, but they'll probably hear you coming and they will leave their posts. Use your machine gun to kill them, however you could also go back to the entrance and wait for them to show up. The choice is yours. Once you've secured this area, reload your weapon quickly and turn left. 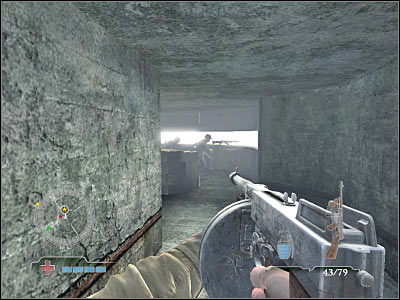 The second large group will appear on your left. Those soldiers were occupying the lower level of the bunker, however they have been distracted by your recent actions. You will have to deal with several soldiers at once, so it would be a good idea to use a machine gun against them. Also, choose longer bursts, instead of more precise shots. Use the stairs to explore the lower floor of the bunker. You will only come across a few opponents here. Once you've secured this bunker, return to the main entrance. 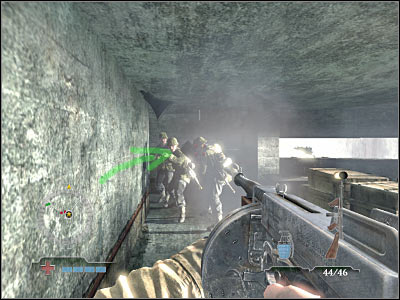 Now you will have to reach the second pillbox. Despite what you might think, it's not going to be easy. Obviously you won't be able to get there in a straight line and you can't use the trenches, because the road is blocked. As a result, you should be on a lookout for a small hill. It's going to be located to your left. Kill all nearby soldiers and hide near the large truck. 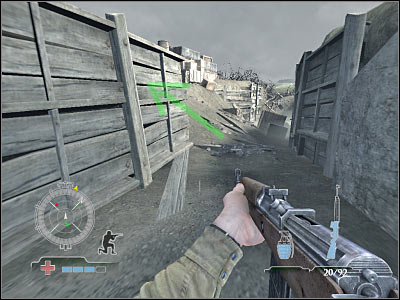 Now you will have to use two sets of white wooden boards to reach your final target. Make sure that you're using your compass, so you aren't surprised by any of the remaining enemy units. Also, some of the German soldiers will be hiding inside the trenches. You won't have to kill them, but it would make your life a lot easier. If you don't want to fight here, try running once you're near them. Remember that you're on an upper platform, so they probably won't follow you. 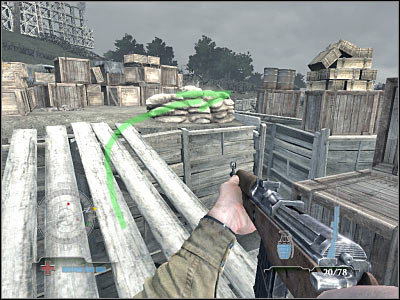 You will have to be moving north-west. Try using nearby crates for much needed cover. Once again, you should know that you won't have to be in a lot of hurry. The second pillbox is going to be guarded by a small number of enemy units, so it's going to be easy to get rid of them. Head on to the trenches, because it's the safest way to the bunker. 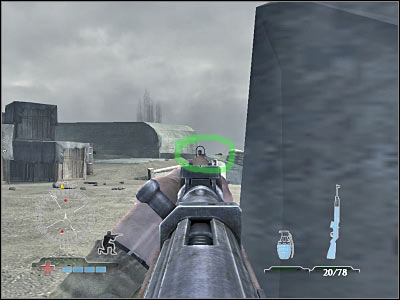 Just as before, you shouldn't be surprised by the fact that the entrance is going to be guarded by a single enemy unit. Kill this guy and take a medkit if you've suffered any injuries. Now you will have to proceed to the first large room. Kill all enemy soldiers. You could also try surprising them or throwing a grenades at them, especially since you won't need these objects anymore. 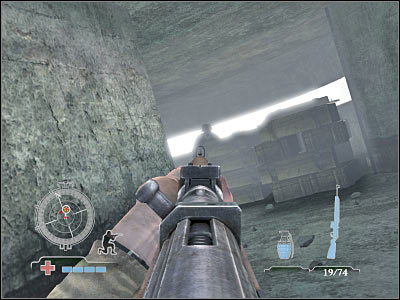 Enter this new room very carefully. Once again, you should also be prepared for a second attack. Enemy soldiers will appear to your left, near the stairs. Head on to the staircase. You will have to get down to a lower level. Be careful, though. You will probably encounter a few soldiers along the way. You will have to secure this pillbox in order to fulfill this objective. You will also end this third mission. 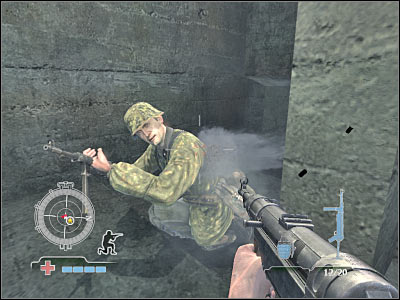