This time you will have to blow up a very large antenna. It's going to be located on the roof of a second bunker, so it's going to a very similar task to the previous one (with the spotting tower), mostly because you'll spend a lot of time inside the bunker, trying to reach the roof area. The first part of this task is going to be more difficult, because the entrance to the bunker is well defended. Nevertheless, you shouldn't encounter any major problems here, especially since allied soldiers will try to help you to get inside. 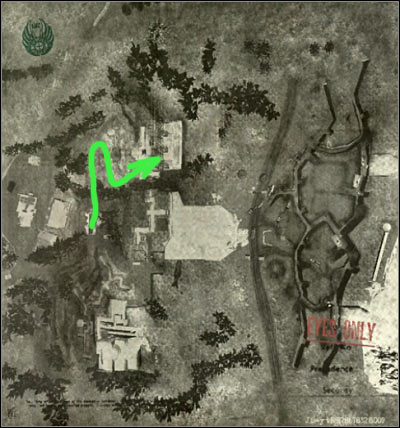 You could try and land near the main bunker, however this would be very risky and you would have to deal with a lot of enemy units at the same time. As a result, it would be better to land somewhere else, so you'll be able to plan your next moves more carefully. You've already considered choosing this area while trying to assemble the M18 weapon. Check the screen in order to find out more. Don't worry if it seems like a long trip, because you won't encounter large groups of enemy units right away. 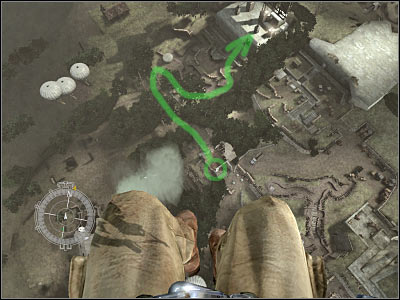 Important! You will have to land to the right of the parachute in order to receive a Skill Drop bonus. It shouldn't be much of a problem. Be careful, though. This building is being guarded by one of the enemy soldiers. He will probably show up here very soon, so you should choose a machine gun from the inventory. If he doesn't, head on to the left room and perform a surprise attack. 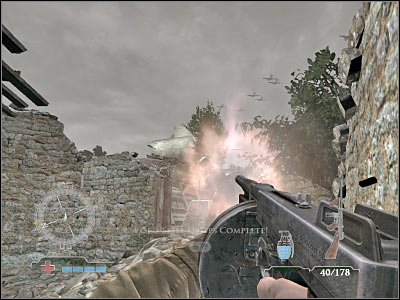 You may finally proceed to your main target. Start off by going south-west. Next, you will have to turn north. You shouldn't encounter any hostile units here, however I'd still recommend that you keep low and stay away from danger zones. Some of the allied soldiers are fighting nearby, but you don't have to help them. Focus only on your task at hand. 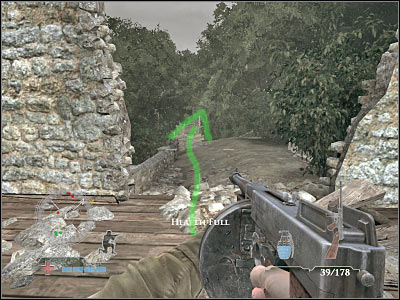 You should be able to reach a much larger area very soon. It's leads directly to the antenna building. You can't stay in the open for obvious reasons. Instead, try hiding behind one of the sandbags. Also, it would be a good idea to kill a few soldiers before moving on. Ignore the heavy machine gun post for the time being. We'll deal with this problem later during the mission. Thankfully, there are a lot of allied soldiers here, so you won't have to worry about being surprised from the back. 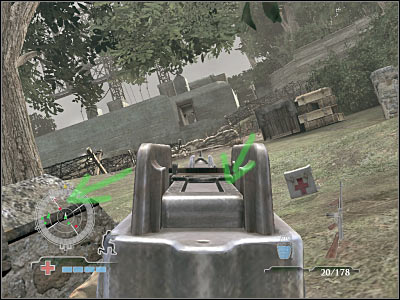 I'd strongly recommend that you attack enemy soldiers from the right flank. In order to do that, you will have to start running north-east. You should be able to locate a few large crates. They're very good for cover. Some of the allied soldiers will probably do the same thing. Enemy soldiers are currently occupying mostly the central area of this field, so you won't have to worry about killing them and if you're lucky they won't even attack you here. 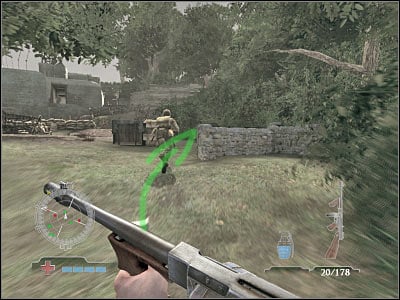 Try moving even closer to the designated northern bunker. Remember that it's crucial to stay behind a good cover. Try moving from one object to the other. You will have to focus most of your attention on the main entrance to the bunker. Kill everyone who decides to leave this building. You will also have to neutralize a heavy machine gun post which should be located to your left. Try using grenades during these fights. As for the machine gun post, observe this area. You will have to prevent other enemy soldiers from using it. 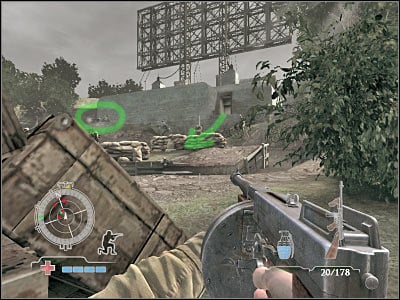