How to Unlock: Complete the task Parlay with the Krogan [Elaaden].

This page contains walkthrough of Investigate Remnant Derelict. This is one of Heleus Assignments (side quests) in Mass Effect: Andromeda, which you can start during exploration of the Elaaden planet. In order to unlock this mission you must complete the mission Parlay with the Krogan. This is one of the longest missions on Elaaden.

In order to unlock the mission, you must complete another one, Parlay with the Krogan, described in a separate chapter in the Elaaden section. This task becomes available right after concluding the second conversation with the Krogan named Jorgal Strux. 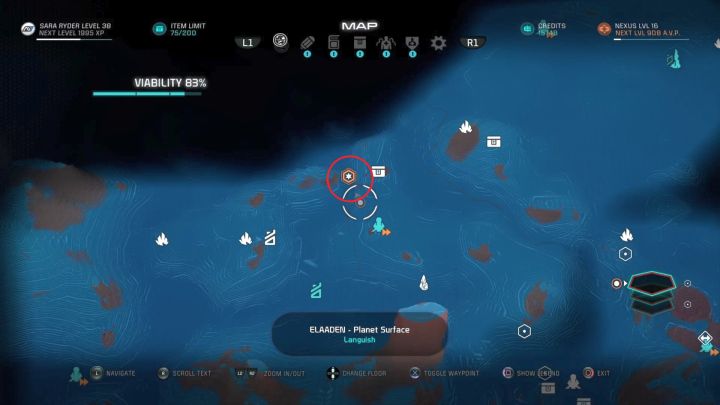 The destination is marked on the map of Elaaden.

As soon as the mission begins you will get your first objective - you must travel to the Remnant Derelict. This is the huge ship you could see during your first landing on Elaaden. You can find the derelict north-west from the center of the planet - the exact location is marked in the picture above. When you come close to the ship follow the navpoint leading you toward a small entrance. Walk through a long tunnel until you get inside the giant ship of the Remnant. 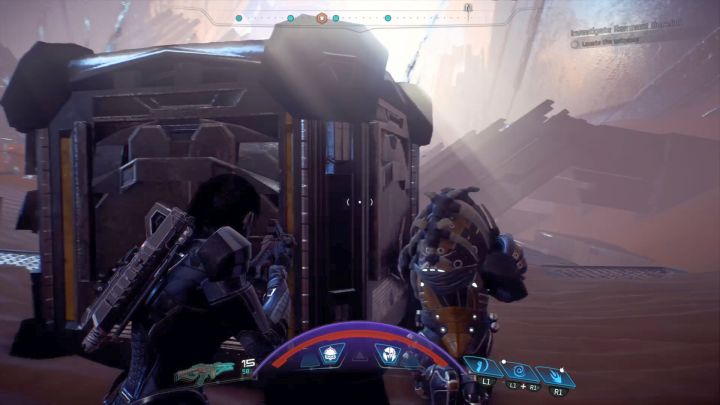 Taking path on the right will provide enough cover from the Remnant turrets fire.

As soon as you get inside deal with a small group of enemies. Next, take note of the Remnant turrets located opposite the entrance (north) - because there are so many of them you will not be able to go this path (it is possible, but very time-consuming). Instead, turn right and dash under the structure that lies there - it will cover you from the turrets in the center. There are several turrets one the way there too, but these are set individually, so it is easy to deal with them. 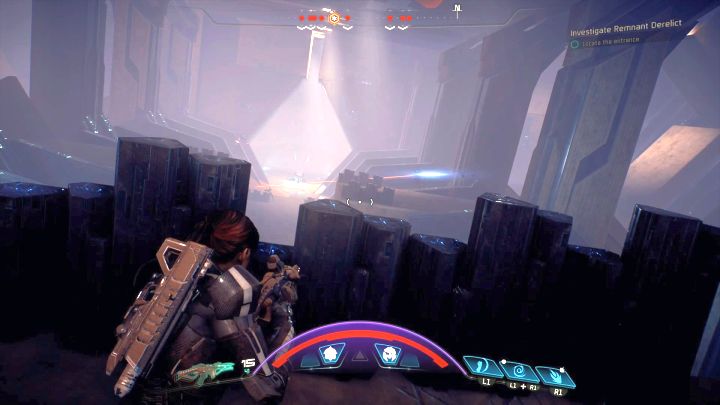 Use the high ground to eliminate the enemies easily.

Follow the path as you walk toward the navpoint. After a while you should come to an open area, where two groups of opponents are fighting: Scavengers and the Remnant. Kill them all using covers and the high ground to your advantage, then approach the Remnant Console pointed at by the navpoint. 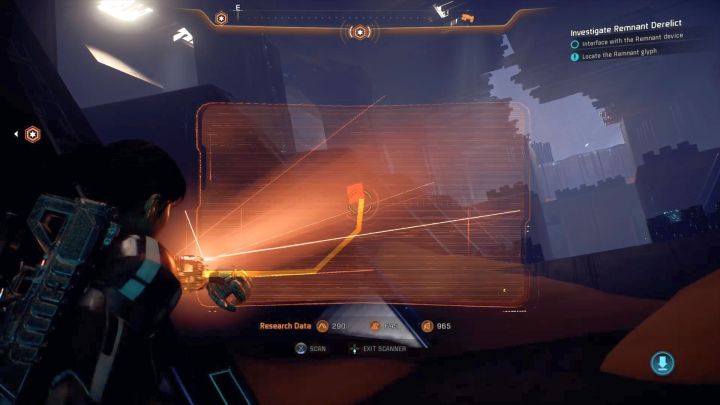 Solving the puzzle, initiated upon interacting with the Remnant console, is currently beyond your capabilities - you must scan a glyph located nearby. In order to find it, just activate the scanner and point it at the Remnant Console - this will reveal a path leading to the glyph. The scanning object is on one of the columns supporting the ceiling - you can see it in the picture above. 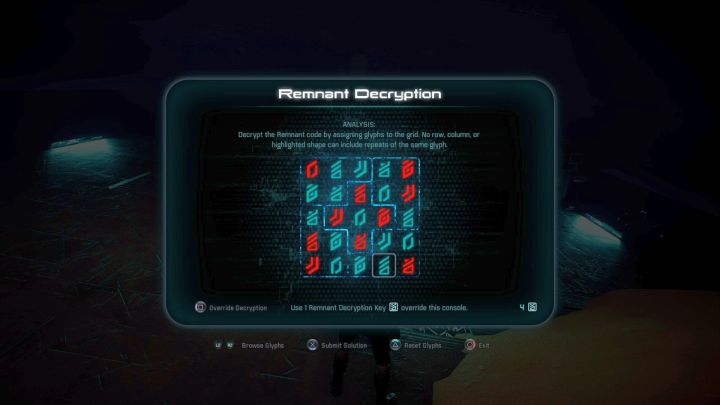 As soon as you scan the glyph go back to the Remnant Console with the puzzle, which you can now solve. The picture above shows the correct combination needed to solve the puzzle. Alternatively, you can use a Decryption Bypass in order to solve the puzzle without playing with the symbols. 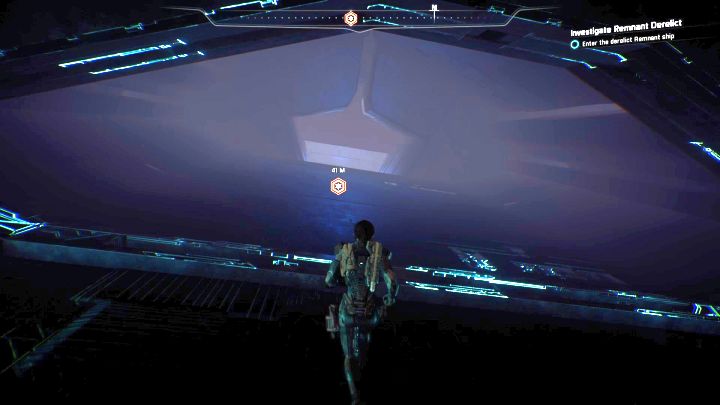 After solving the Remnant puzzle, follow the navpoint in order to enter the Remnant Derelict. As soon as you get to the next gate, this part of the mission will be completed and another objective will appear. 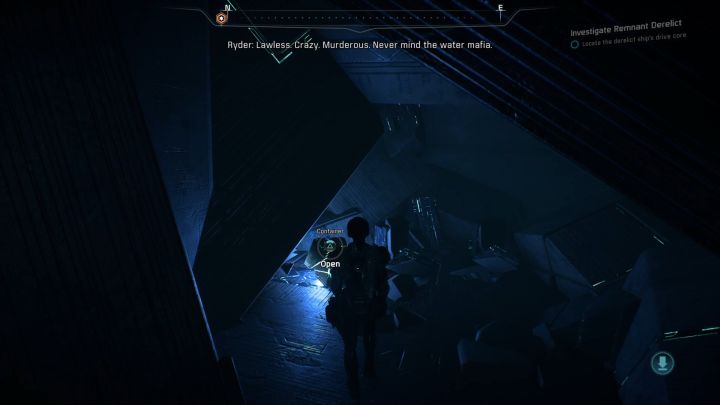 While exploring the derelict ship, it is worth stepping into side corridors, because there are many items to collect there.

Your objective is to find the derelict ship's drive core. In order to do this you must follow the navpoint - this location is linear, so you can't really get lost. It's also worth to look around you - the back corridors on the sides that you pass by often contain boxes with items. Interact with the Remnant Console in order to open up a way for yourself and continue your journey until you reach the next gate, through which, obviously, you must walk. 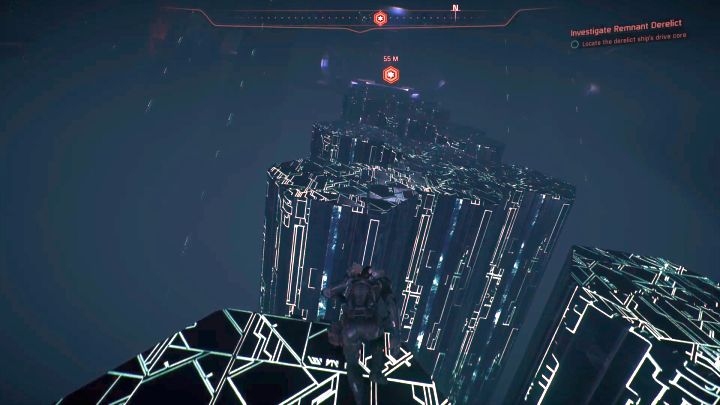 You have to jump from column to column to get across.

Behind the gate there is another Remnant Console. Interacting with it creates a bridge that will take you across the chasm. Be careful, though! After making a few steps the bridge will partly collapse and you will have to jump from column to column in order to reach the other side. When you reach a solid ground again, approach the Remnant Console and interact with it in order to trigger a cut-scene.

Find another exit from the Derelict Ship 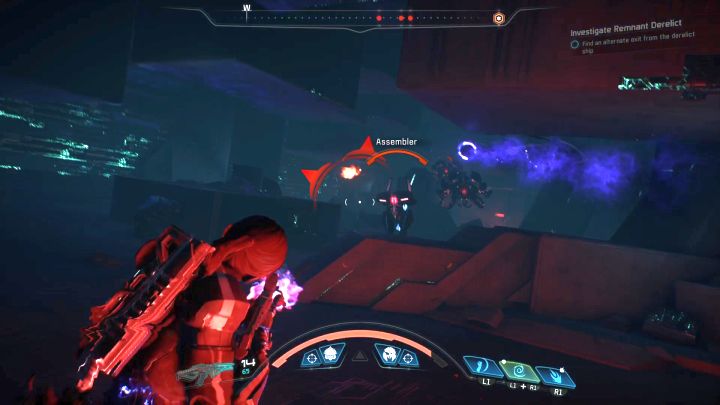 During your last moments on the Remnant's ship you have to eliminate quite a large group of enemies.

During the cut-scene your team learns that the core has been stolen. You must now find an alternative exit from the ship. As soon as you regain control of your character, first thing you must do is to head left and go through the corridor and all the way to a door. Walk on until you encounter a group of the Remnant, whom you must eliminate. Once you have dealt with them, continue following the navpoint to an open space, where another group of opponents awaits. 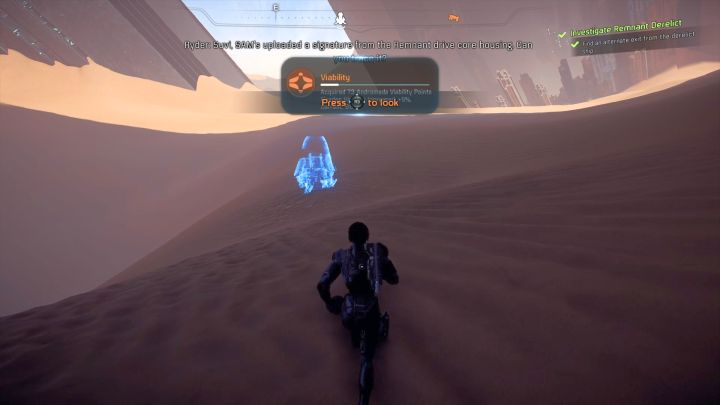 The longed-for return to the surface.

Now you just need to follow the navpoint as you fight your way through the Remnant ship's corridors until you finally go back to the surface of the planet. After a brief conversation a Forward Station gets dropped on the planet, which you can use to leave this place. After that the task is completed. Moreover, another mission unlocks: Seach for the Stolen Remnant Drive Core.