WARNING - The quest described below is Peebee's Loyalty Mission. This means that it is the biggest and the most complex quest connected with this character. Completing it allows you to get the access to Peebee's highest, sixth, level abilities.

Here you can find the walkthrough for Peebee: A Mysterious Remnant Signal quest. This is one of the side quests in Mass Effect: Andromeda game that belongs to the category called "Allies and relationships". The quest is given by Peebee and during it you must examine the titular signal. Visit the planet Pas-10 and try to outrun Kalida and get to the valuable Remnant artifact first.

Speak with Peebee in the Tempest's escape pod

Go to the Tempest's escape pod and meet with Peebee. During the conversation confirm that you want to examine the Remnant signal hoping that it can give you their technology.

Go to Pas-10 in Inalaara system 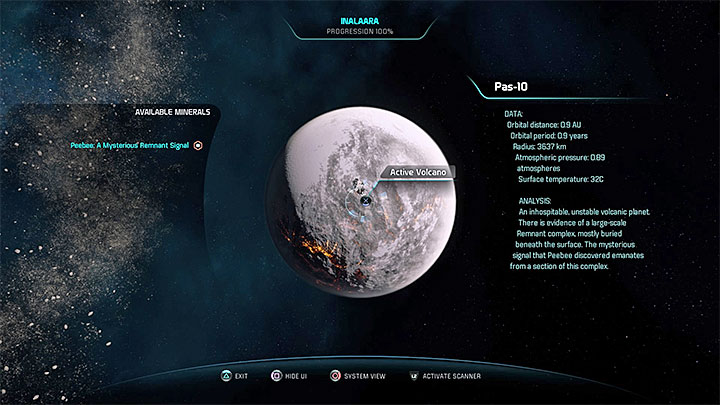 Select the newly unlocked Inalaara system and when you get there choose planet Pas-10. Search for the active volcano on the planet's surface and examine it. You are asked to confirm the mission. It should be mentioned that you can't go back to the open-access locations until you complete the mission. This is because Peebee will use an unusual way to "encourage" the team to land on the planet (she is the obligatory party member during this quest).

Warning - During the mission you should look for optional containers and objects that can be scanned. Thanks to that you can get a lot of treasures and Research Data points.

Find the source of the Remnant signal 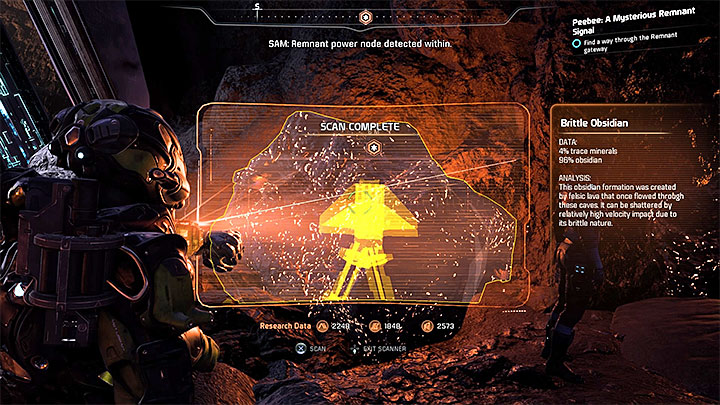 Start your exploration of Pas-10 and avoid any contact with the lava. If you touch it, it can depletes your shields in an instant and you will start to quickly lose your health. Soon, you will reach a closed gate. Activate the scanner and find the power node presented in the picture. The object is hidden behind rocks but you can quickly destroy them by using melee attacks. Use the device and a new passage will open. 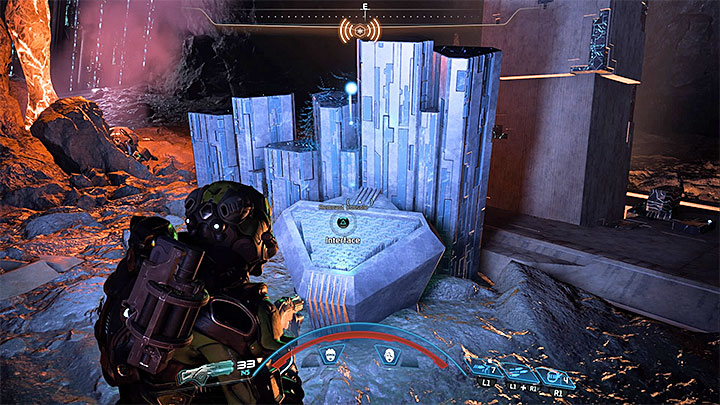 By using the console you can activate a friendly bot

In the caves you can find deactivated Remnant bots and another closed passage. Use the scanner on the device on the top next to the door and then locate the Remnant console. Thanks to that you can reprogram one of the Observers which will unlock the passage.

Move forward. Soon, you leave the caves and you notice Kalinda's shuttle. After that you come across the first group of hostile Remnant bots. Defeat them and secure the area. After the fight you can use the console to unlock a new pass between rocks.

Find a way to pull out the Remnant antenna 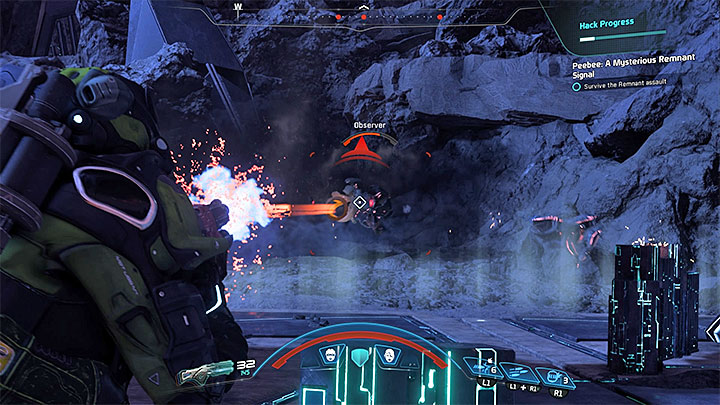 Stay close to the hacked console

This mission objective is received when you get to the area with the antenna. When you use the Remnant console you start the hacking process. You must defend yourself until the hacking bar, displayed in the upper right corner, fills out. A very important information - in order to "charge" the bar you must stay close to the console. Hide behind covers and use weapons and powers that are suitable for close range. Optionally, you can send your team mates a little bit further and use them to distract the Ramnant from the console that you are hacking.

When the hacking process is finished you can eliminate the rest of the Remnant or you can go straight to the bridge. After a few steps you must jump over the abyss. The new path leads your team to next, bigger area.

Scan the boulder blocking the path 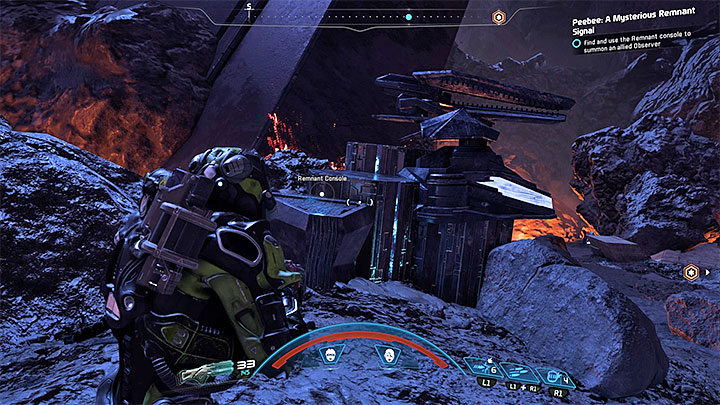 The big boulder is on the right and, after scanning it, you learn that you need to find Observer's activation console. BUT before you do that you should check out the second console presented in the picture above. By hacking it you can take the control over a turret which will be helpful in a few moments. A big battle starts after you hack the main console. 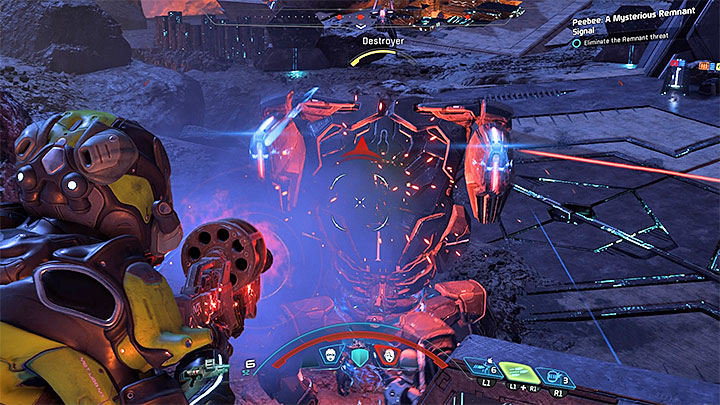 First, break Destroyer's shield and then destroy its armor

During this battle with the Remnant besides the "regular" bots you must also face a powerful Destroyer. When fighting against this machine you must use covers because it's equipped with powerful weapons. Notice that this bot is protected by shield and armor so use abilities and powers that can destroy them quickly. Don't allow it to get close to you because this bot can also use a powerful impulse that can seriously weaken you or your team members (move quickly to another place). A small consolation is that thanks to hacking the turret you can now have two addidtional "allies" during this battle (the second is the Observer).

After the battle you must scan the crack in the big boulder and wait for the Observer to unlock the passage.

Chase Kalinda that heads to the source of the Remnant signal 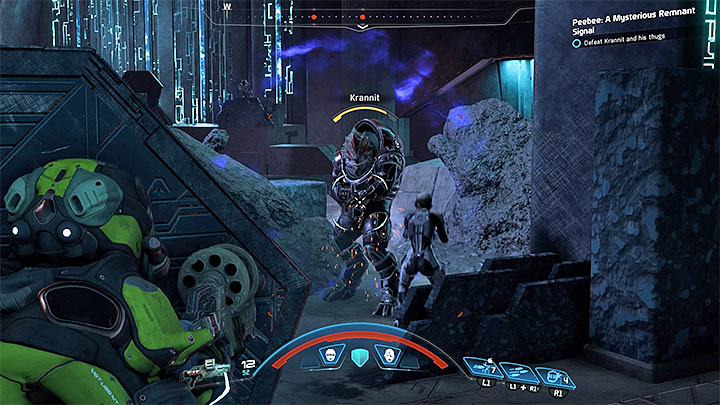 Krannit is very dangerous at a close distance

Shortly after that a cutscene during which you meet with Kalinda will play. Next, you must defeat some of her subordinates. After defeating them go to the bigger room where you must fight with new enemies. During this battle the first thing that you must do is to defeat Krogan Krannit - keep him at a distance and use attacks that can weaken his armor. After his death you can deal with the rest of the enemies.

Find the next Remnant console and hack it in order to "recruit" the Observer. After that you must scan the device on the wall and wait for the Observer to get interest in it. This unlocks the new path.

Warning - The console can also be hacked during the fight. In this case the Observer can help you to defeat Kalinda's people.

Reach the source of the signal

Follow the long hallway and go to the big room. Look around before you jump down on the lower level (pay attention to where the consoles and the supply chests are) because when you are there you must prepare for the biggest battle of this quest. 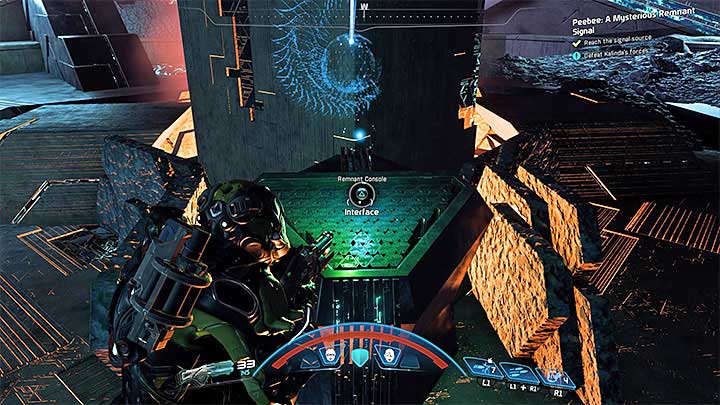 In this battle you can also help yourself by using the Remnant Observers. Try to get to the first console as fast as you can and later, when there is no danger, you can get to the another one. You can fight with the bandits when you are on the lower level or you can shoot at them from the upper level. The living enemies are not the problem, the biggest threat comes from the two Hydra machines. Use the best ammo, abilities and powers to deplete their armor. Also, use covers and remember that Hydras are slow which means that you can escape them. Continue fighting until all enemies are defeated.

Extend the Remnant bridge and go to Kalinda

This is a very simple objective. Find the new object near the lava and wait for one of the Observers to get to it. New stone blocks will appear. You can use them to go through the area covered in lava. 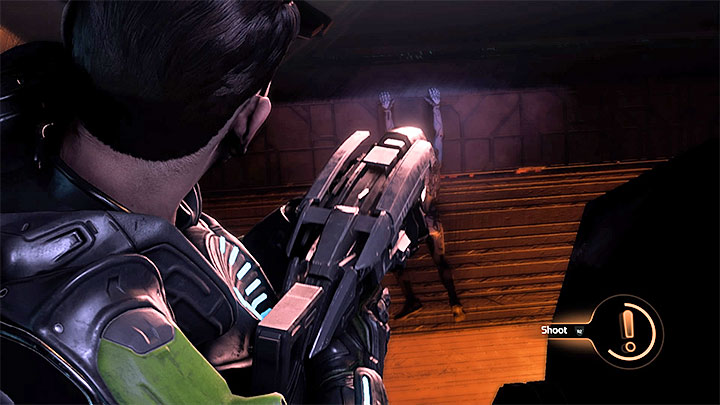 The game automatically plays the cutscene during which Peebee and Kalinda will race to the Remnant data core. Stay focused because during the cutscene you can use the Narrative Action presented in the picture above:

This objective is unlocked regardless of your choice regarding Kalinda. You have about 70 seconds to escape which is enough to get to the shuttle. Follow the linear path and use sprint. When you return to the Tempest you have to watch one of the two possible cutscenes (this depends on whether you got the core or saved Kalina, she will leave the message for Peebee).

Warning - The last part of this quest allows you to flirt with Peebee. You can also do this during the unofficial epilogue which plays during your next conversation with Peebee on the Tempest.