How to unlock: Read a priority e-mail on [Tempest].

This section contains a walkthrough for Dissension in the Ranks, one of the "allies and relationships" quests found in Mass Effect: Andromeda. The task becomes available after you've managed to score a serious hit upon the kett forces during Hunting the Archon. The quest involves travelling to Elaaden to investigate two crashed kett vessels. The task leads to an interesting discovery: it turns out that not all of the kett want to follow the way set out by the Archon. 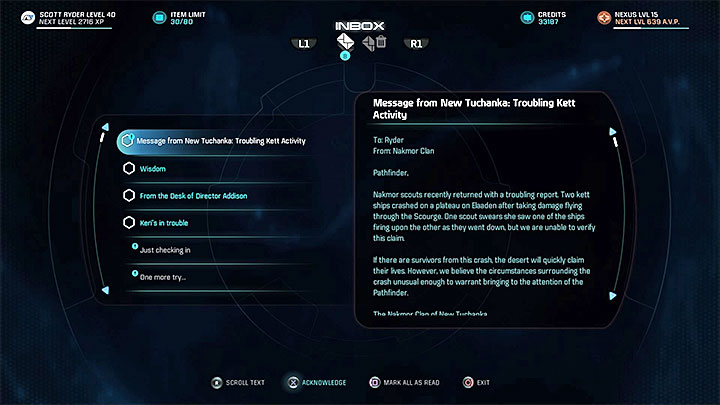 A heads-up from Nakmor Clan

The quest should appear in your journal soon after you've dealt a major hit to the kett forces during Hunting the Archon. The ensuing briefing that took place on the Tempest ends up with a message from Nakmor Clan detailing two kett ships that crashed on Elaaden. 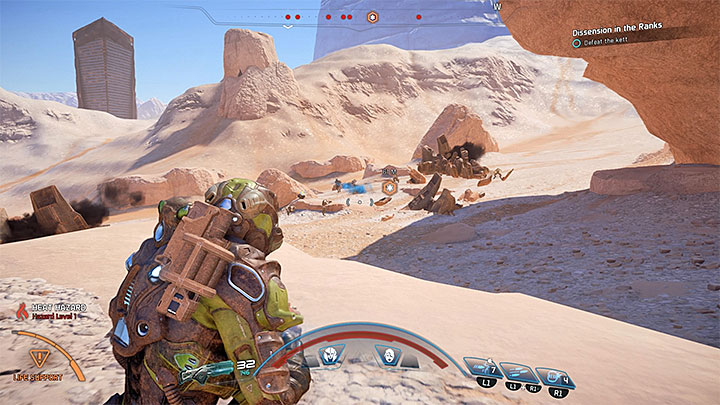 Travel to Elaaden and make your way to the wrecks, which are located in a crater in the central part of the planet. The location may be inaccessible - use Nomad's off-road mode and apply the afterburner when needed. Once you're near the crash area, follow the black smoke to reach your destination.

Begin by clearing the area from that kett forces that made their way to the site. Once cleared, look around the crash area to find a kett datapad - hacking it results in additional Andromeda Viability Points.

Talk with Suvi and Lexi

Board the Tempest and proceed to the bridge to talk to Suvi, who has an idea on how to decrypt the unusual data log. Hear her out, then proceed to the medical bay and speak to Lexi. Listen to the unlocked recording, which ends up with a new goal.

Locate the source of the signal on Eos 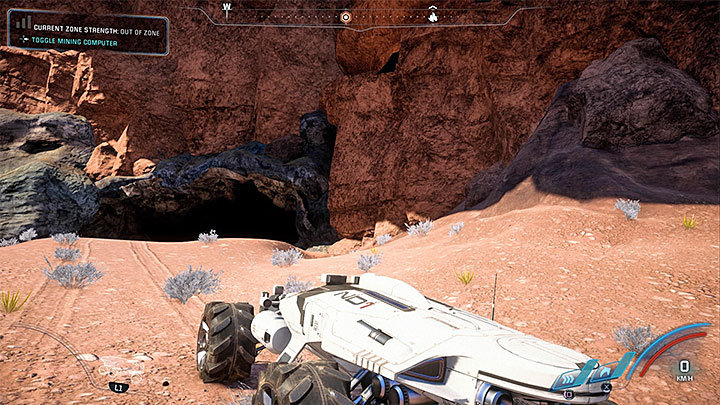 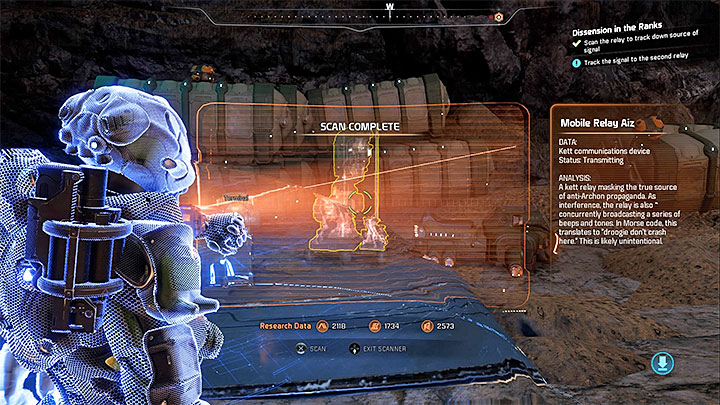 The source can be traced to a location not far from Prodromos. To access it, you'll need to use to get past the cave shown on screenshot 1. Engage the kett who are guarding the passageways and proceed to the upper level to find the mobile relay device (shown on screenshot 2). Scan it to trace the source of the signal.

Track the signal to the second relay 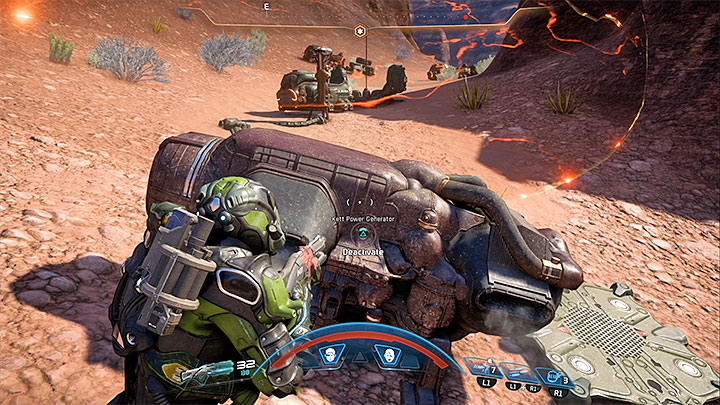 Disable the force field before you scan the object

Travel north-west to find the second relay. Start by clearing the area from kett forces. Once the threat has been taken care off, approach the generator to disable the force field surrounding the relay.

Track the signal to the third relay 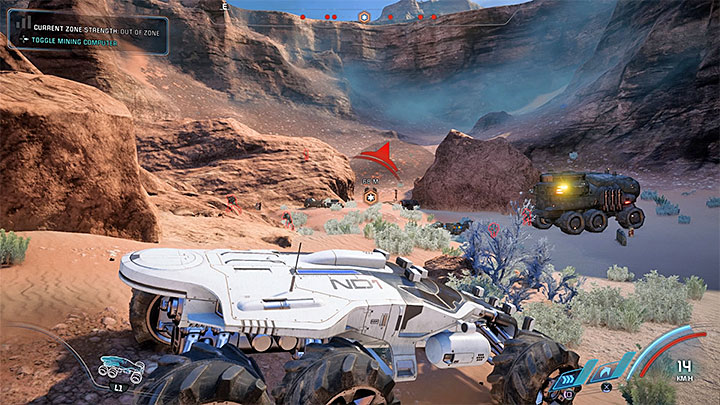 The vicinity of the third relay

The third relay is located south-west from your previous objective. Your approach should remain the same - eliminate the kett, sabotage the generator, and scan the relay.

Track the signal to the fourth relay 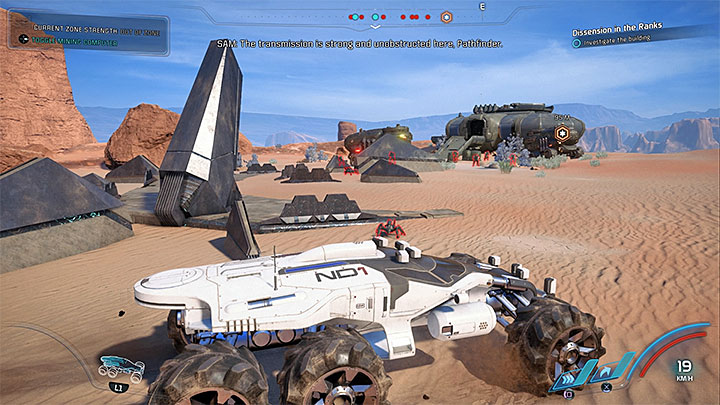 The fourth relay can be found in the western part of the map - use Nomad to reach the new location. Once you've eliminated the kett, make your way to the marked building to find the device. 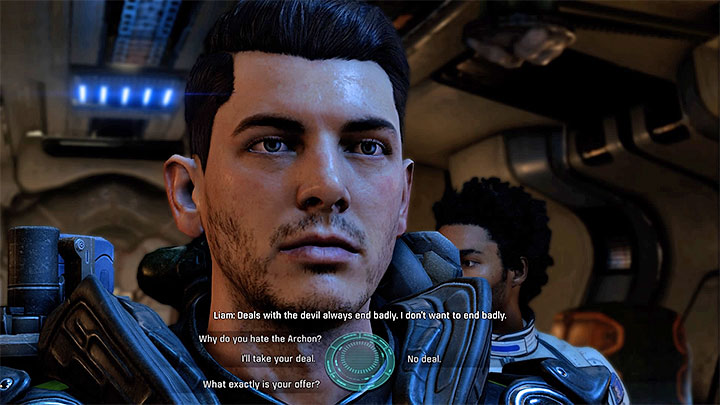 Enter the main building and use the large console to contact Primus. The final part of the conversation leaves you with a choice: you can either agree to a deal with the Primus (you can take advantage of it during the last major primary quest - Meridian: The Way Home) or refuse it completely. I suggest choosing the first variant, as it is free of any negative consequences. The quest will be completed regardless of your approach.