WARNING - The quest described below is Cora's loyalty mission. This means that it is the most complex and lengthy quest connected to that hero. Completing it will unlock all Cora's rank 6 abilities.

How to unlock: Read an e-mail from Cora [Tempest].

This section contains a walkthrough for Cora Harper: At Duty's Edge, one of allies and relationships side quests found in Mass Effect Andromeda. The task sees us ascertain the location of asari ark, Leusinia, to board it in order to help the asari units stave off the kett units besieging the vessel. 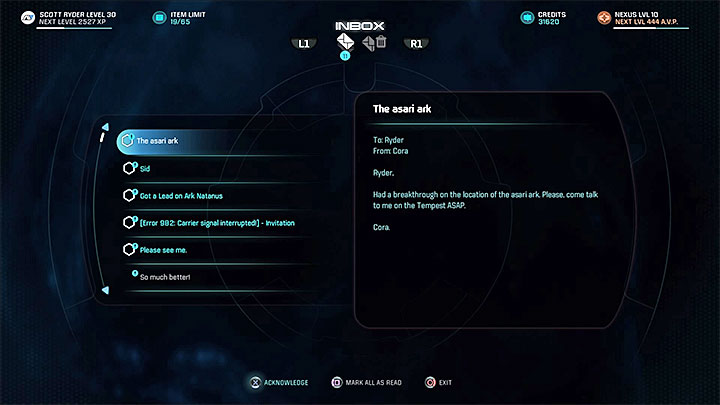 Read the e-mail regarding the asari ark, then visit Cora's cabin to talk to her

The quest can be begun once you've returned from one of your previous assignments - Hunting the Archon. Cora's previous quest - Cora Harper: Asari's Ark - has led you to a transponder which was supposed to help you locate the missing ark once the deciphering process had been completed. You'll receive an e-mail notification once the procedure is completed. Read the e-mail and make your way to the Tempest's cargo bay to talk to Cora personally. You'll learn that she wants to find and guide Leusinia (the asari's ark, which is currently in Valay) back to the Nexus. We begin the quest by travelling to the aforementioned star system. 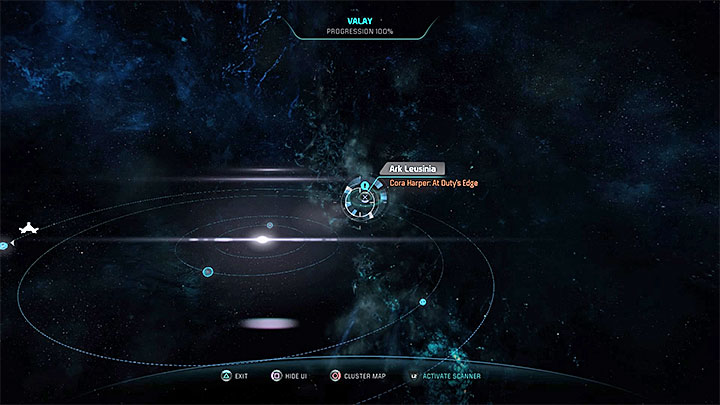 Travel to Valay. Ignore all the planets found in this system and activate the scanner to locate a remote anomaly which turns out to be the Ark Leusinia (shown on the screenshot above). Choose it and deploy to begin the operation. As can easily be imagined, Cora has to be the part of the team, while you are locked on board the vessel until you've managed to complete the whole task.

Your journey through the vessel begins with a radio contact with Captain Atandra. Get through the atrium and make your way to the bridge, where you'll encounter both the Captain and Sarissa. You'll learn of the trouble the vessel has with leaving this star system and the kett forces that have boarded the ship.

You'll find yourself in the rail car instantly after the conversation. Use the control panel to begin traveling to the hangar control. Once you've arrived at your destination, begin following the quest marker to reach Vederia. Talk to her, then activate the hangar controls responsible for activating the override. 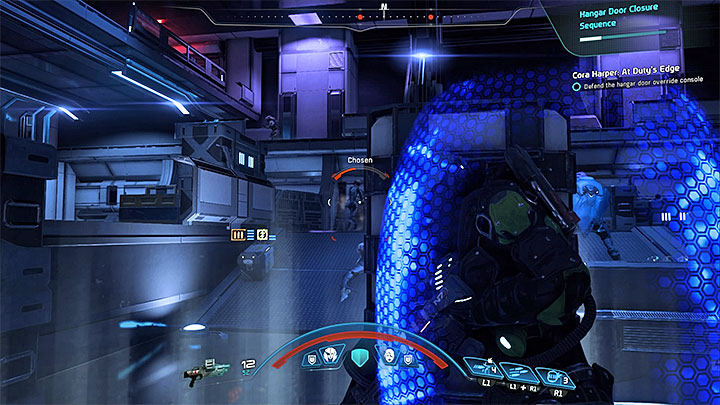 You are now standing before the first major battle. Your job is to defend the override console until the lockdown sequence is completed (represented by the upper right progress bar). Remember that the progress bar will only be active if you are standing in the near vicinity of the console. Find good cover and defend yourself against the incoming enemy. You may send the rest of your party forward to avoid some of the kett, however keep track of your teammates to avoid casualties.

You'll mostly be facing weaker kett, but be on the lookout for flanking attacks and enemies firing at you from the first floor platform (you can also choose to plant explosives near the console as an defensive measure). Wait until the hangar is safe, then take care of the remaining opponents and talk to Vederia.

Go below decks through the living quarters 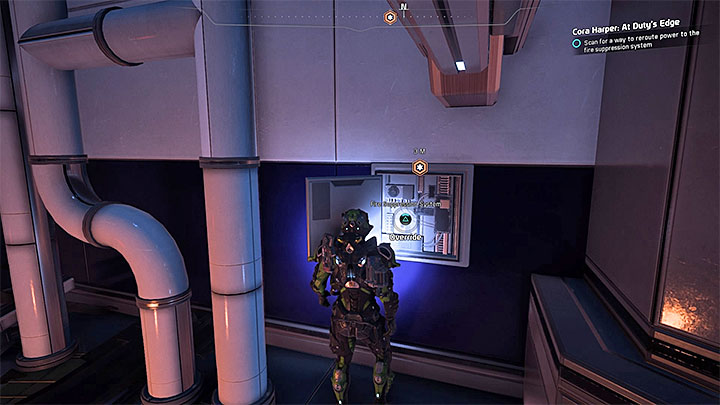 Proceed through the newly unlocked corridor. You'll descend to an unlit area - continue following the quest marker, but watch out for a few Wraiths that prowl the floor. Pass the burning corridor on your right, then use the stairs to descend and enter the Fire Control area. You'll receive an objective to secure the room, which is guarded by a few kett and a Destined.

Continue with your objectives - find the fire suppression console and investigate it. It turns out that you'll need to reroute the power to the system. Activate your scanner and follow the yellow cable to locate the object shown on the screenshot above. You can now return to the main console and activate the extinguishers.

The extinguishers have cleared out one of the corridors - use it to reach the Observation Deck. Approach Vederia, who is standing next to a strange device. 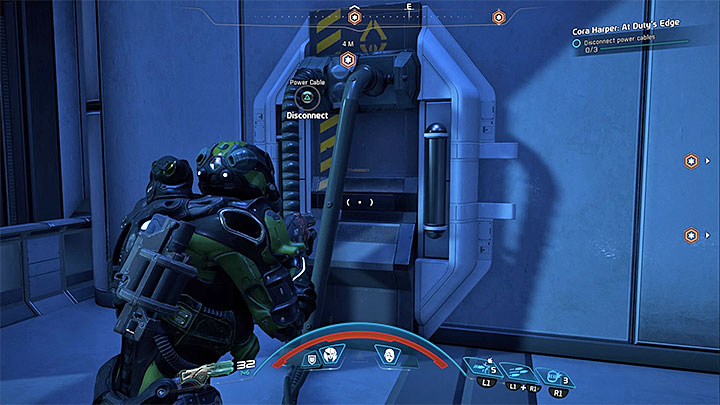 Begin by scanning the mass effect generator found next to Vederia. You can access the power cables in any order - you'll be engaged by a group of kett every time you've managed to disconnect one of them. These encounters shouldn't be hard, considering that you can prepare yourself and for e.g. plant charges before disconnecting a cable. 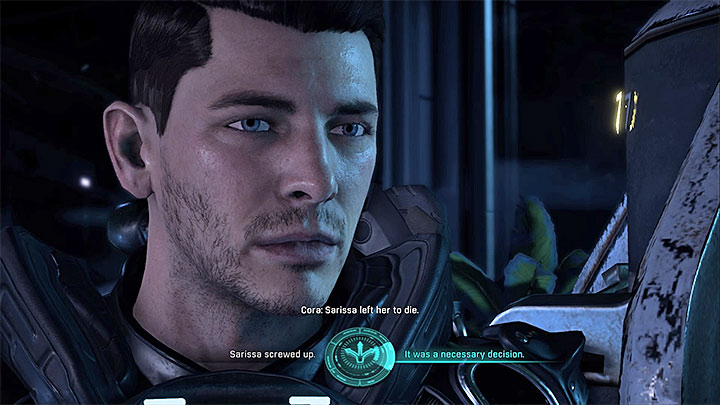 Decide whether Sarissa has made a good call

Once you've managed to disconnect all three cables, return to the mass effect device and disable it. You'll now begin a new conversation with Vederia, while Sarissa and Captain Atandra will be heard on the radio. The datalog you've acquired contains evidence that incriminates Sarissa and her actions. The conversation with Cora enables you to either accuse Sarissa or consider her decision as a necessary evil.

Travel to Deck Twelve, an area that will be a scene to a major kett attack. Once you've arrived to the location, you can proceed with a secondary objective that sees you activate the mass effect field. Use one of the consoles nearby to complete the objective. 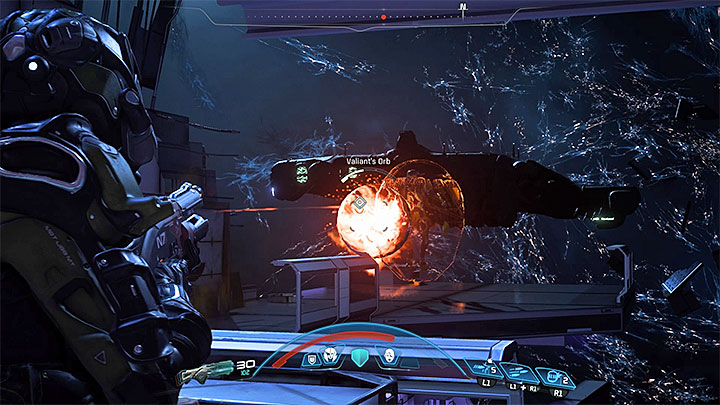 You'll be facing a large number of kett, including their more powerful units. Stay mobile and stay close to the supply crates to be able to continue responding in force. Soon, the battle will be joined by a Valiant, one of kett ascendants. Avoid his energy attacks and focus your attention on destroying the orb that powers his shield. Destroying the orb will enable you to hit the enemy with conventional attacks. Unfortunately, the barrier will be back online soon, so use your best ammo, abilities, or powers to quickly depose your enemy of the most of his health points. Once the new sphere appears, take care of it as quickly as you can to repeat the process.

Lead Leusinia to a safe location 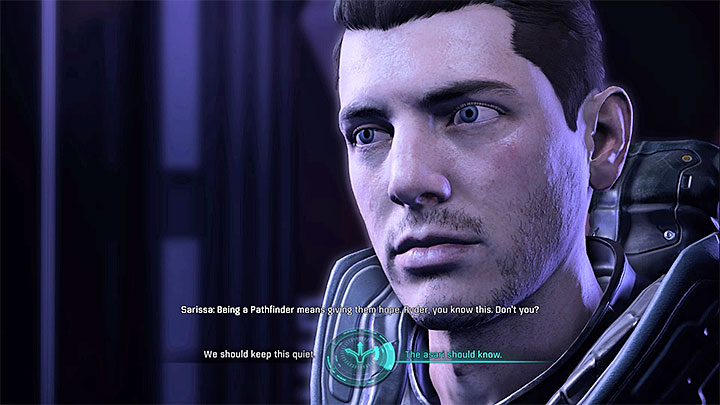 The cut-scene that begins after the escape from the kett forces contains a few matters that need your attention. The first choice sees you decide upon the fate of Sarissa following her actions: 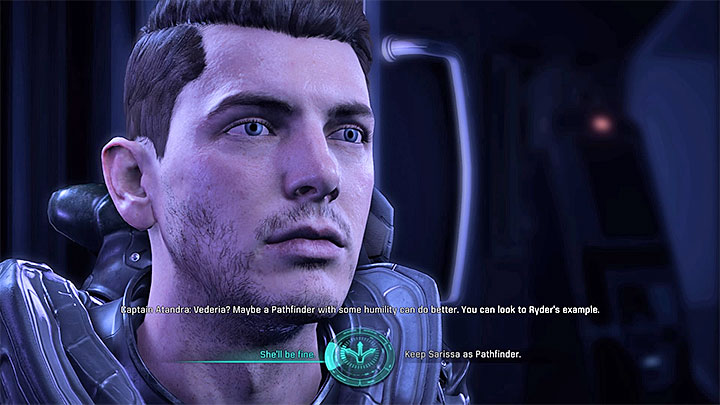 If you've decided to reveal the truth, you'll be left with a second choice:

Both these choices are without any further consequences. Regardless of your choice, you'll return to the Tempest and engage in a conversation with Cora. If you have mutual feelings, consider getting intimate during that meeting (special dialogue option)