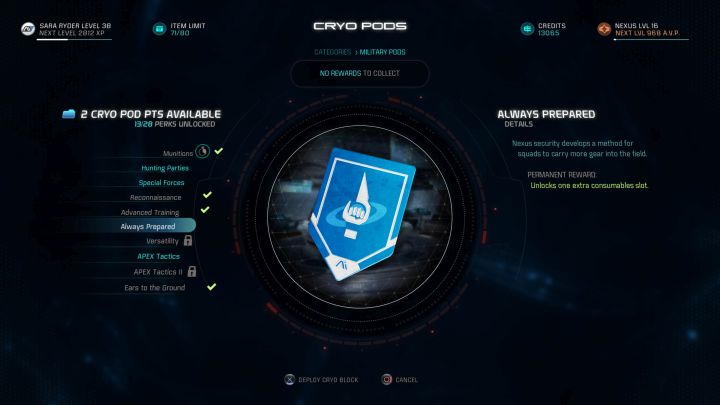 With this cryo pod capsule you will be able to carry more Consumables.

Consumable items allow you to gain a temporary boost, change the type of ammunition, immediately restore shields and reload weapons, or to fire a tremendously powerful projectile capable of taking down most enemies in one hit. Those items can be used multiple times, before you use up all of their charges.

However, similarly to weapons, at the beginning of the game you will be able to carry only two consumables at a time, severely hindering your possibilities. To solve this problem, you can unlock two of the cryo pod capsules. Those are Always Prepared and Versatility, both available in the Military tab. Once opened, the character will be able to carry 3 and 4 consumables respectively.

The ability to carry four different consumable items will be beneficial to every character, regardless of whether you're playing a pure soldier focused on using firearms, or a Biotic / Tech character. The option to use Cryo Ammo, restore shields or to fire a powerful projectile can change the outcome of the entire encounter.