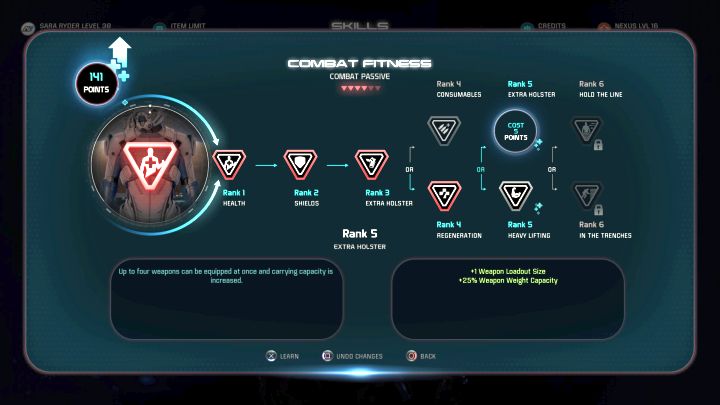 Upgrading this ability will allow you to carry more weapons.

At the beginning of your journey in Mass Effect Andromeda you will find out that you can carry only two weapons (melee weapons are not included in that). This should be more than enough during the first few hours of the game, when the enemy diversity is not that great and you should be able to take them out without any problems. This becomes a problem from the mid game, when more powerful, heavily armored and/or shielded enemies start to appear on the battlefield, some foes are too mobile for a sniper rifle and some attack from a huge distance, rendering shotguns useless.

More weapon diversity is the only solution for that problem, although it's not that easy to achieve, given the inability to customize weapon loadout at any time. One of the Combat tree abilities, Combat Fitness, comes to your aid. First point invested into this ability will "only" increase your health, but the upgrades are the ones that you're interested in. Rank 3 and 5, both named Extra Holster, increase the maximum amount of weapons you can carry to 3 and 4 respectively. Additionally, they also increase Weapon Weight Capacity, allowing you to carry more and/or heavier weapons without them hindering your cooldown times.

The ability to carry more weapons will be most useful to characters focused on using firearms, but even a pure Biotic will sooner or later make use of it.