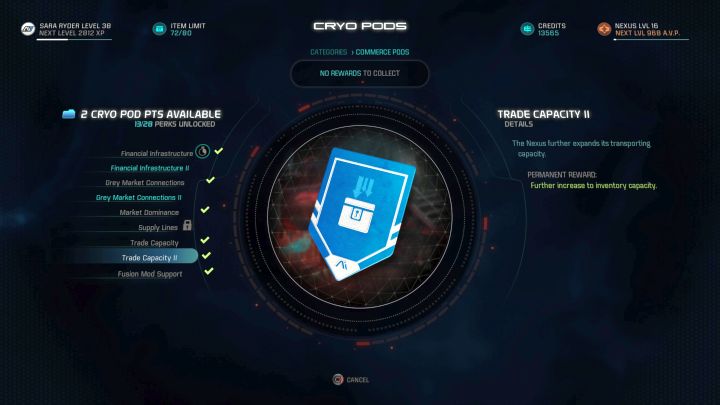 This cryo pod capsule will allow you to carry 80 items at once.

You will collect hundreds of different items during your playthrough of the Mass Effect Andromeda. Most of those items will turn out to be completely useless to you and will end up sold to a vendor to earn some extra Credits (especially during the early game), or deconstructed to gain precious crafting materials. However, you will definitely want to keep some of the items to equip them on your character in the future. And here's where the problem starts - the generally hated mechanic of limited carrying weight / space in inventory is also implemented in the latest installment of the Mass Effect franchise. What's even worse, you can't change the equipment of your character whenever you want (aside from the moment you pick a new item up) - this can only be done when leaving Tempest, or at loadout stations located near Forward Stations.

How can one increase the maximum inventory capacity of the character? This can be done by opening two cryo pod capsules (the process of earning cryo pod capsule points was explained in a separate chapter). Those capsules are:

This is the only way to increase the item limit of a character, but with the latest patch (1.05) it allows you to double the starting value. Additionally, you should always monitor the state of your inventory and get rid of any unwanted items. Weapons and armors can be deconstructed to gain precious crafting materials and the process can be done anywhere, even during combat.