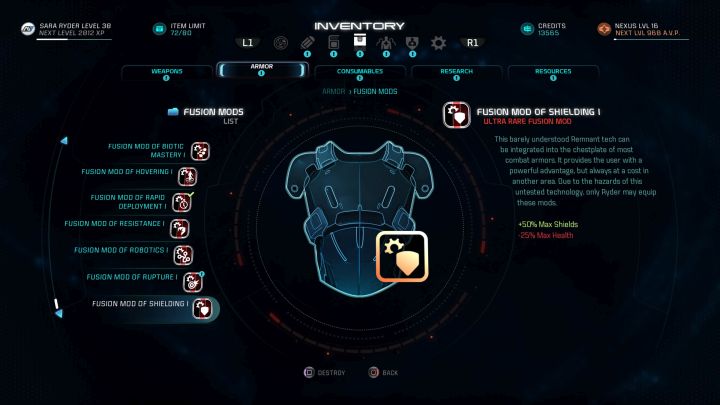 Fusion Mods give huge bonuses to one stat, with a penalty to another.

Mass Effect Andromeda gives access to quite an advanced crafting system. This allows the player to significantly modify and customize elements of armors and weapons to their liking and to enhance the effectiveness of a specific gameplay style. In contrast to weapons, armors can't be modified by normal mods (like, for instance, scopes on weapons). However, you can add a powerful Fusion Mod on a piece of chest armor.

Their function is quite simple - you just have to place, during the loadout customization section (before leaving Tempest ship, or by getting into a loadout terminal), a Fusion Mod into a chest piece to get the benefits of the item. Fusion Mods give tremendous bonuses to some stats, but at the same time come with penalties to others. In most cases, those enhance one aspect of a specific gameplay style, while weakening the other - like, for instance, increasing the shields of the character and decreasing health, or decreasing recharge time of all abilities and giving a penalty to weapon damage.

Fusion Mods can only be acquired by exploring Remnant Vaults on planets, as well as by defeating Remnant Architects. There are 11 Fusion Mods in the game and you can acquire them only once - remember to not sell them, or items with installed Fusion Mods, as those can become useful later in the game and Credits are useless either way.

Finally, you should remember about one of the cryo pod capsules if you want to maximize the effects of Fusion Mods. It's Fusion Mod Support, which decreases by half the penalty of a equipped Fusion Mod - instead of -50% health points, you will lose only 25%, instead of -30% penalty to weapon damage it will only be -15% and so on. As you can imagine, this increases their effectiveness tremendously and allows you to use Fusion Mods that you would normally not even think about - like decreasing the recharge times of all abilities that comes with a -15% penalty to weapon damage, when your character is focused on using firearms.