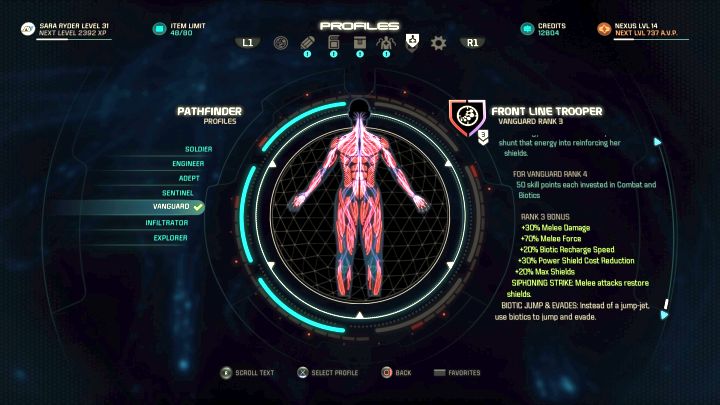 The Vanguard profile on the selection screen.

The Vanguard is the second hybrid profile. It focuses on the usage of abilities from both Biotic and Combat trees, making it perfect for those who are investing skill points in both of those skill trees. It requires 3 / 12 / 27 / 50 / 78 / 116 points invested in Biotic and Combat skill trees to unlock 1st / 2nd / 3rd / 4th / 5th / 6th level of this profile.

Below you can find a table showing all of the passive bonuses given to the character when the profile is active, from the first to the sixth level of the Vanguard profile.

There are several things worth noting when it comes to the data presented in the table:

This profile gives access to two additional abilities. Siphoning Strikes causes your melee attacks to replenish your shields - each such attack will replenish 20% of your maximum shields. Biotic Jump and Evades enhances dodges performed by your character, increasing their range.

The Vanguard profile is a perfect choice for those playing a hybrid character, combining the abilities from Combat and Biotic trees and for those who rely heavily on melee attacks. This profile gives a tremendous boost to melee damage and force. It also increases max shields, allowing character with this profile to be more effective in close combat. The most important thing, however, is the Siphoning Strikes passive ability, allowing your melee attacks to replenish 20% of your total shield with each strike. Keep in mind that jump melee attacks are also influenced by it. To maximize the effects of this ability, you should use a fast melee weapon and keep away from the more powerful, but slower ones. This profile also has a good synergy with Nova and Lance abilities, both equipped with the upgrade that takes cooldown times out and causes them to cost shield points instead. Power Shield Cost Reduction decreases the shield cost of those abilities, allowing you to use them more often and without fear that one of them will deplete the entire shield of your character.