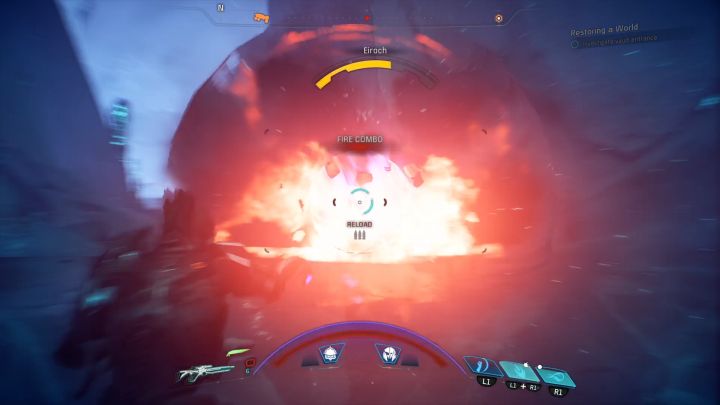 Combos allow you to cause some spectacular effects.

A combo is a mechanism returning to Mass Effect Andromeda. It allows you to prime enemies, putting a charge of a specific element on them, after which you can detonate the said primer to cause a certain effect and deal additional damage. This is a crucial part of the gameplay which you should use all the time. Doing so while on a lower difficulty level will make the encounters easier, whereas highest difficulties are almost impossible to beat without combos.

Priming enemies for combos and types of primers

First things first, you need to prime an enemy for a combo. The type of the primer influences the effect that will be caused once the primer is detonated. There are four types of primers in the game:

To prime an enemy for combo you just have to hit him with one of the above mentioned abilities, or with special ammo. Note that the enemy can only be affected and primed by a single effect - you can't set someone on fire, freeze him and lift him above ground with Singularity and cause three different effects with a single detonation.

To detonate a primer you have to hit an enemy affected by a primer with one of the detonator abilities. You can choose from the following abilities: