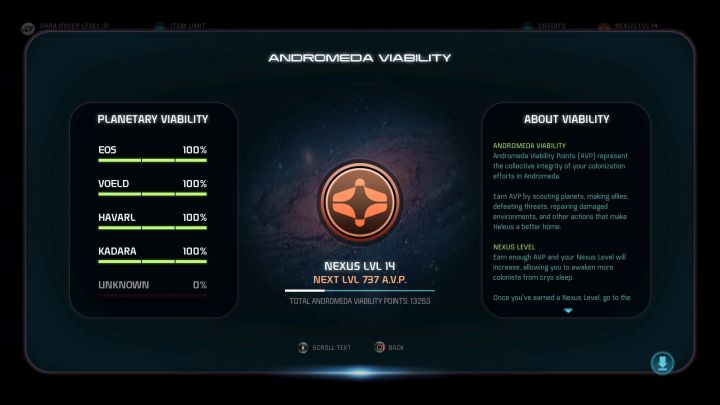 Planet viability can be checked in the game.

Planet viability is an indicator telling you how well a planet is suited for life. By default, each planet starts with 0% viability - this turns them into hostile environments and makes exploring them almost impossible. Your character will be affected by radiation, low temperatures and toxicity. As the planet viability increases, the environment of the planet will improve - previously inaccessible and highly polluted places will now be practically harmless and water, which not so long ago depleted your life-support meter instantaneously, will now become clear and easy to cross. Planet viability can be increasing by doing the following:

To be able to easily reach 100% of a planet viability, earning substantial amount of Andromeda Viability points and unlocking all of the planet-only cryo pods, you need to:

The first four points presented above will allow you to reach 80-90% of planet viability, depending on the amount of Forward Stations available on the surface of a planet. Afterwards, you just have to complete 2-3 bigger quests to increase the planet viability to 100% and unlock all of the most important items. If, however, you want to unlock all cryo pods, you will need to complete most of the quests on each planet in the game.