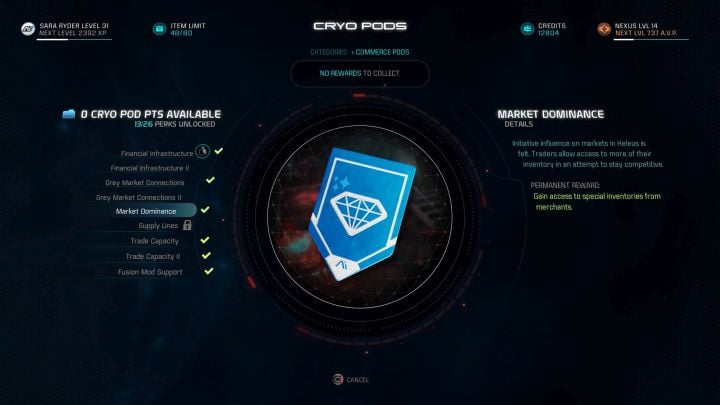 Andromeda Viability is a mechanic closely linked to the number of cryo capsules that can be opened.

Andromeda viability, determined by Andromeda Viability Points (AVP) represents the colonization process of the Andromeda galaxy. Basically, it shows how well you are doing as a Pathfinder. The level of Andromeda Viability can be checked, for instance, in the pause menu - you just have to take a look in the upper right corner of the screen.

This indication can be treated like a separate experience bar, one that is not connected with the main character, but with the development of the Nexus station. Each level of Andromeda Viability you earn gives you an additional cryo pod point, allowing you to open one of the 20 cryo pods available on the Nexus station. Opening each one of them gives various benefits to the player - those can offer, for instance, additional resources, crafting materials, research points, increase the item limit of the character or even unlock additional items available from the vendors. The order in which you should open cryo pods can be found in the chapter "Which cryo pods should you open first?"

Andromeda Viability can be developed up to level 20 (unlocking 20 cry pod capsules) and the level of it can be increased by doing the following:

Increasing the Andromeda Viability is not crucial to complete the game, but doing so and opening some of the cryo pods will make the game a lot easier. It's worth to do so, especially given the fact that, in most cases, this goes in pair with accumulating "normal" experience points.