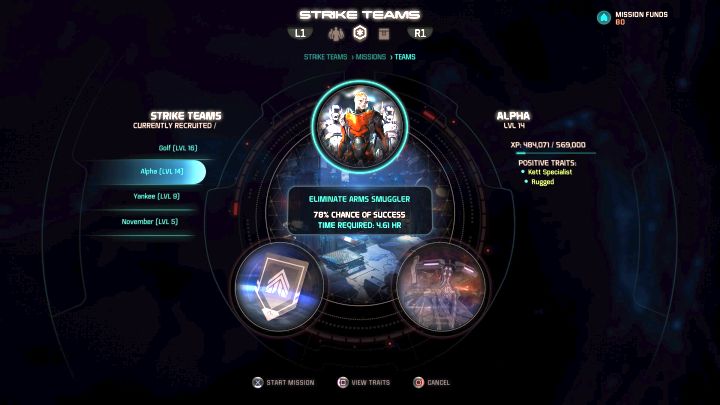 Strike Teams is an optional mechanic awaiting for players in Mass Effect Andromeda. It allows a player to send teams on specials missions, during which they have a chance to acquire additional resources, minerals, Credits, as well as weapons and elements of equipment. What is more, this activity is connected with multiplayer - the missions can be ordered and completed automatically, without any input from the player, or can be played in multiplayer, in cooperation with other players.

The most important aspect of the mechanic are the Strike Teams. Those are four-man squads that the player can recruit. At the beginning of the game, you start with only a single team, but as you play the game you will be able to recruit more and send them on multiple missions at the same time. Strike Teams are recruited with Mission Funds, a special currency earned by the teams during missions. Each successful mission gives you 5 Mission Funds. However, recruiting multiple teams isn't that easy - each new team increases the costs of the next one. Additionally, each Strike Team earns experience points during their missions, allowing them to advance to higher levels and increase their overall effectiveness. 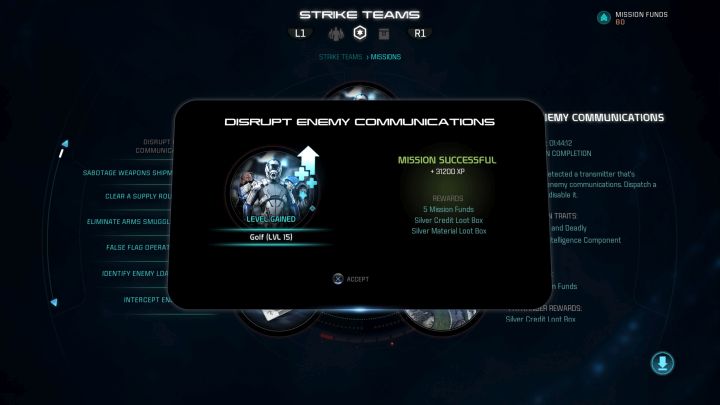 Successful missions will reward you with Mission Funds and various loot boxes.

Once your Strike Teams are ready, it's time to send them on a mission. By entering the Strike Teams screen, available both on Tempest, as well as on the Nexus station, you will be presented with a list of available missions. Each differs from another in difficulty level and the rewards you will be given once it's completed. Generally speaking, the harder the mission, the better are the potential rewards. The rewards are earned by the team only if the mission is a success - if it failed, the team will come back empty handed. However, the team will always earn experience points for the mission, regardless of its outcome - although completing it will still give more. Finally, the difficulty level of the mission goes hand in hand with the chances of success - the most difficult will have around 10% chances of success for an inexperienced team, whereas easier ones will often go above 90%. 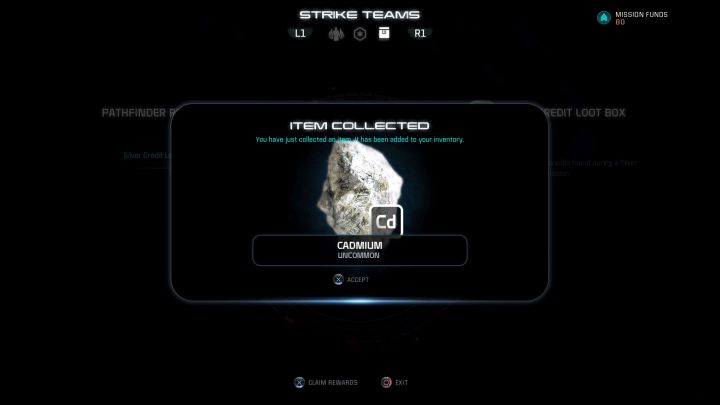 Even the most basic and common resources might be useful.

Once the Strike Team succeeds, it will return with multiple rewards. Those, as previously mentioned, depend on the difficulty of the mission and are divided into categories. From worst to best, those are Bronze, Silver and Gold. A Strike Team will, in most cases, come back with two rewards out of a pool of the possible ones - research points, Credits or a box full of crafting components. The better the rank (color) of the loot box, the better / more materials will be found inside. Keep in mind that even though those rewards are rather small and won't have a significant impact on your gameplay, sending Strike Teams is completely free and takes a few seconds to do.

The last thing worth mentioning is the fact that even though a Strike Team might have a really small chance to succeed, it's still worth to send them on a mission. Sometimes (and especially when you don't have more missions, because the list wasn't updated yet) it's a good idea to send a team on a mission with under 10% chances of success. A Strike Team can't die during the mission and they will still earn some experience points. Additionally, if they somehow succeed, they will gain several levels from a single mission. Finally, playing a mission in multiplayer mode can help, although the chances there depend heavily on your and other players' skills.