In the two previous chapters you learned how to get blueprints and crafting materials required to create them but also how the crafting process looks. Creating equipment gives you a rather good amount of options but augmenting it allows you to fully customize weapons or armor parts so that they can suit your style.

Augments are special items that can boost stats of your weapons and armor parts but some of them can even completely change the way in which they work. Weapon augments are a good example - they can change the projectiles so, for example, an assault rifle can change into a grenade launcher, a sniper rifle can shoot powerful homing missiles and a shotgun can shoot plasma. Similar things happen with armor parts. It is best seen in the case of leg armor where augments can boost the melee damage performed while in air - they can deal additional damage (fire, electricity) or freeze you enemies. As you can easily notice this completely changes the way in which weapons and armor parts work giving you much more options. 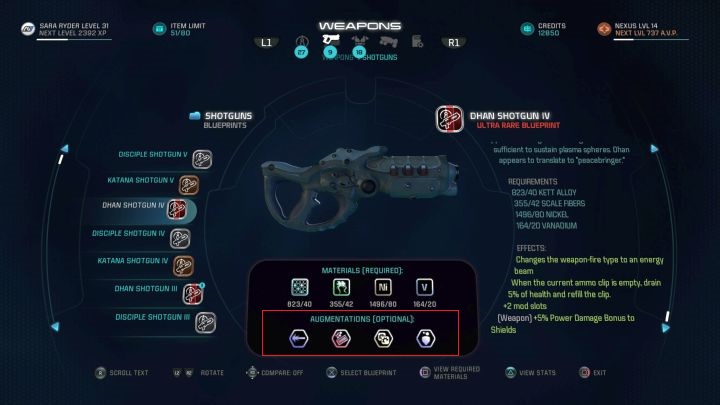 A Weapon or an armor part can have up to 4 augment slots.

You can augment every weapon or armor part but there is a small catch. You can only install them in items that you made yourself - augments can't be installed in acquired armor parts or weapons.

In order to install an Augment you must select Development screen that can be accessed from a Research Center, select the item that you want (weapon or armor part) and then press the button on the bottom of the screen to augment said item - in the picture above you can see a crafted weapon with four Augments. Now you only have to craft that item. Your unique weapon or armor part is ready to use.

If you want to use augments you should remember about a few things: