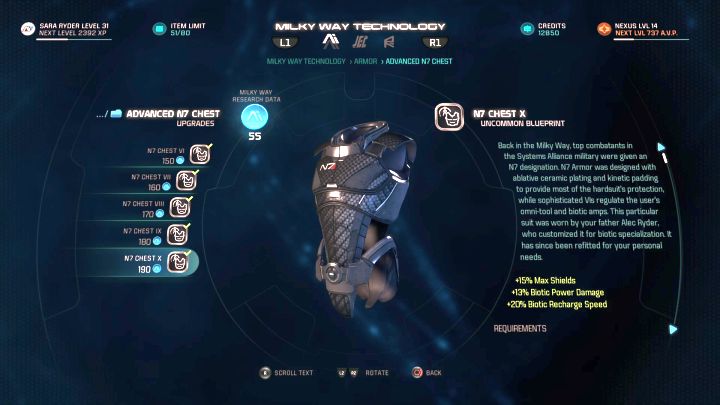 N7 armor, something that many Mass Effect fans look at with nostalgia.

Mass Effect Andromeda offers players a simple system that, despite its simplicity, gives a lot of options in creating equipment. The process starts with acquiring blueprints that can be used to create an item that a player wants.

There are 4 tiers for equipment. From the worst to the best you have Common, Uncommon, Rare and Ultrarare. As you can easily guess, the higher the tier, the better the item - weapons can have better offensive parameters such as damage and armors can have greater stats (e.g. better shields or health regeneration). Also, the higher the tier, the more Augments you can install in them - more information in following chapters.

Equipment's tier is one thing, but where do you find blueprints? There are three main sources:

The process of getting new blueprints for weapons and armors is different from the way you get augments. When you acquire a new weapon or armor blueprint you only unlock the access to it - after that you must enter the screen for creating equipment and make the item that you want. This is different for augments because you can't create them - when you unlock it, whether by buying a blueprint from a merchant or by unlocking it through a Research Center you receive one piece of a given augment which can be later installed in a weapon. Additionally, when you unlock it there is a chance that you can find this augment during your exploration - this can't be done before unlocking them.