How to unlock: Read an email from Captain Dunn [Tempest].

This section contains a walkthrough for Contagion, one of the Heleus assignments found in Mass Effect: Andromeda. The task involves finding an Initiative member infected by a deadly disease to stop it from going viral and creating a station-wide emergency. 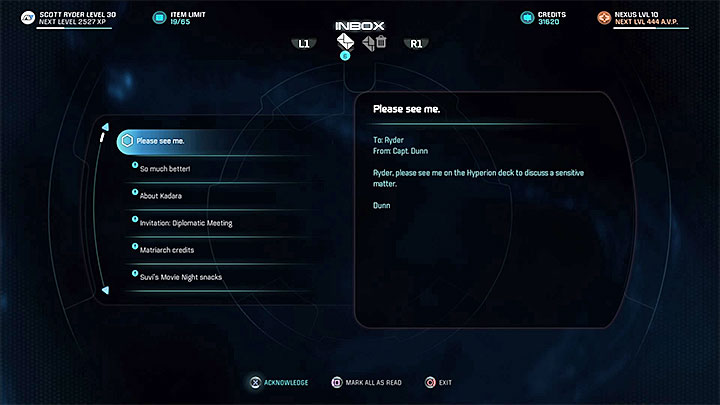 The quest begins with an urgent message from Captain Dunn

Return to the Tempest after your first visit to Kadara (Hunting the Archon) to find a short message from Captain Dunn, asking for your assistance in "a sensitive matter".

Travel to the Nexus and use the rail to reach Habitation Quarters. Meet up with Captain Dunn to learn of a recently awoken woman who is infected with a very dangerous virus. Your job will be to find her before the disease becomes contagious and starts infecting other citizens.

Talk with Harry Carlyle in the cryogenic lab

Use the rail to reach Nexus: Cryogenic Lab and talk with Dr. Carlyle. You'll learn more about the disease and the carrier, and receive the first lead - the doctor suggests visiting the customs office.

Speak with an immigration officer in the docking area 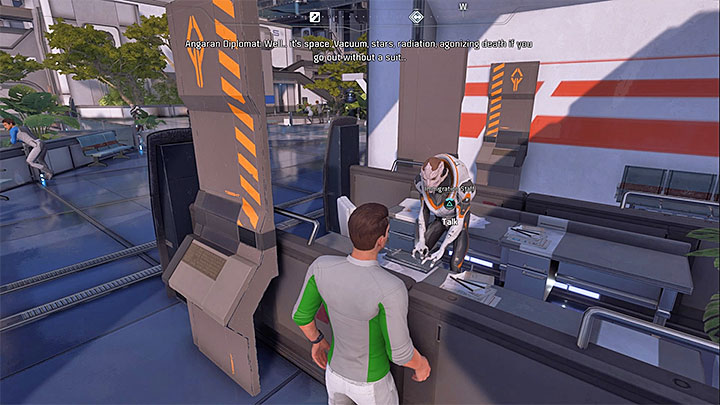 Use the rail to return to the Docking Area. Visit the customs office found in the north-eastern corner of the map (shown on the screenshot). Ask the immigration officer about Ruth (this conversation, as well as the further ones enable you to conceal the reasons why you want to find the woman - this will not affect the outcome of the quest. 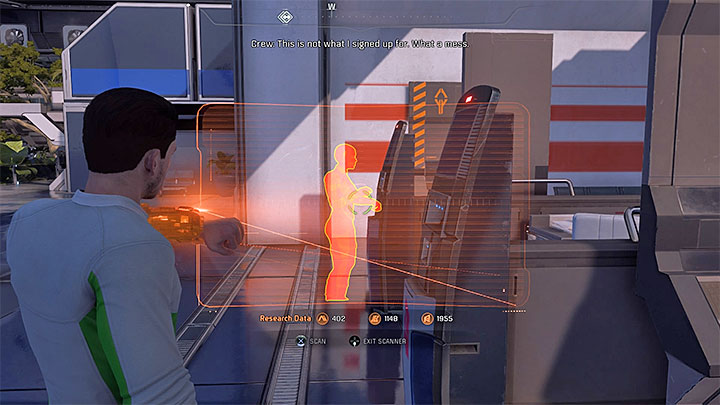 Equip the scanner and follow the interactive clues left by your target's previous activities. Proceed slowly and follow the trail, which will lead you to the Vortex Club located in the south-western corner of the map.

Gather information at the Vortex 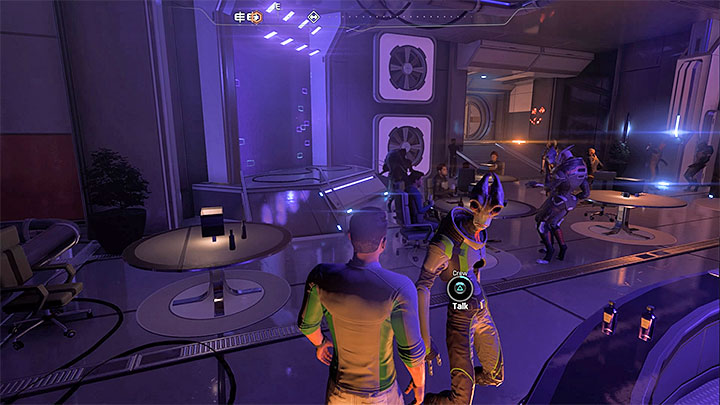 Use the rail to get to the Operations Center. Your objective is to talk to Teron Aminus, one of the technicians found on the terrace. You'll learn that Ruth could have left Nexus through a shuttle.

Travel to the Docking Area and return to the customs office found in the north-eastern corner of the area. Talk to Samuel Francoeur to find out that Ruth had stolen a shuttle and left the station. 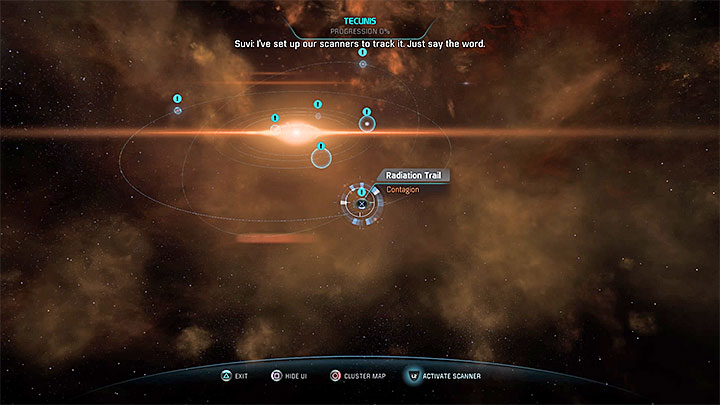 Return to the Tempest and open up the galaxy map. The shuttle's trail sees you enter a few different systems - begin by traveling to Tecunis. Scan the area in search for anomalies and follow upon the found radiation trail. You won't find the shuttle, but you'll be rewarded with Milky Way Research Data.

Continue following the trail, which leads to a number of different systems. Fly to each system (Zaubray, Anasa i Solminae) and investigate the marked anomalies. Finally, Suvi will inform you that Ruth's shuttle had landed on Kadara, one of the planets in Govorkam system.

Find the shuttle on Kadara 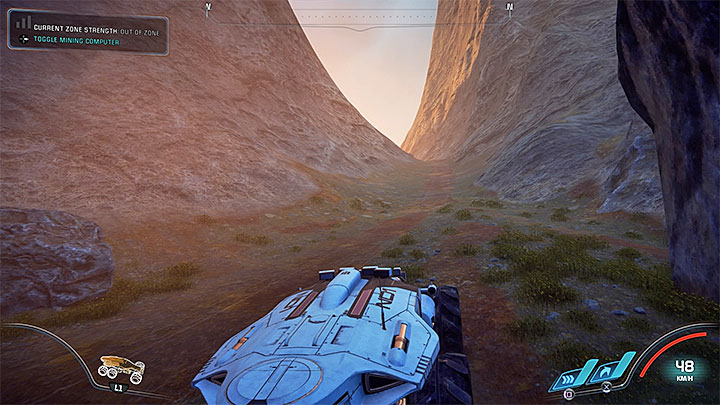 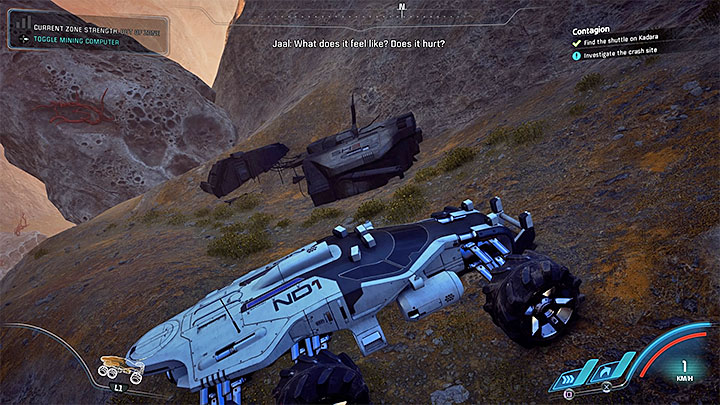 Land on Kadara and use the relay station to travel to the badlands. The shuttle had crashed in the north-eastern part of the planet, forcing you to embark on a long journey through the surface of the planet. To access the crash zone, you'll need to take the route found east from the quest marker (shown on the first screenshot) then go off-road and turn south. You should finally reach the shuttle (shown on the second screenshot).

Use your scanner to locate shuttle cockpit recorder that contains a message recorded by Ruth. You'll learn that her disease is already contagious, which makes it even more important to find her. 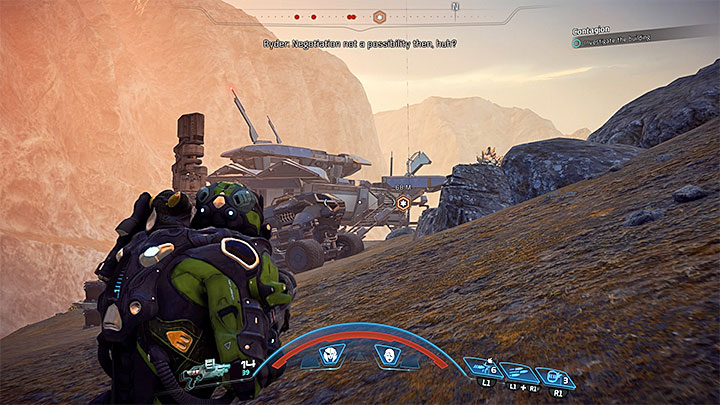 Continue scanning the area. Find the trail and continue following the marker until you find the building shown on the screenshot, which you may have passed by en route to the crashed shuttle.

Start by getting rid of Roekaar and adhi beasts found near the building. The enemy may receive some reinforcements, but the battle shouldn't be a challenge. 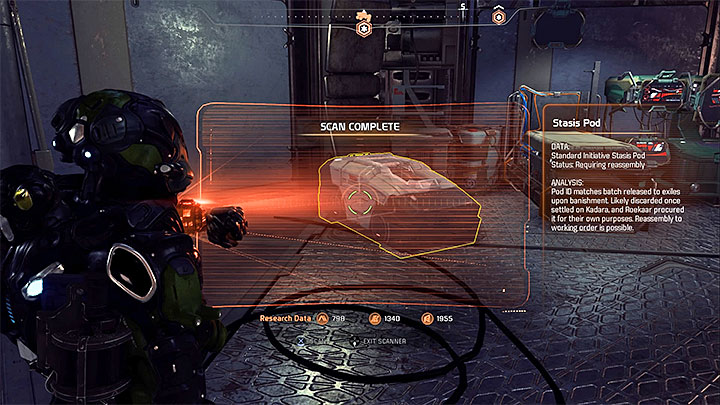 The door leading to the upper floor is closed, but you can unlock them by accessing a console found on a different floor of the building. While you're at it, take a look at the stasis pod shown on the screenshot above. The object will show you one of the ways of dealing with the situation. 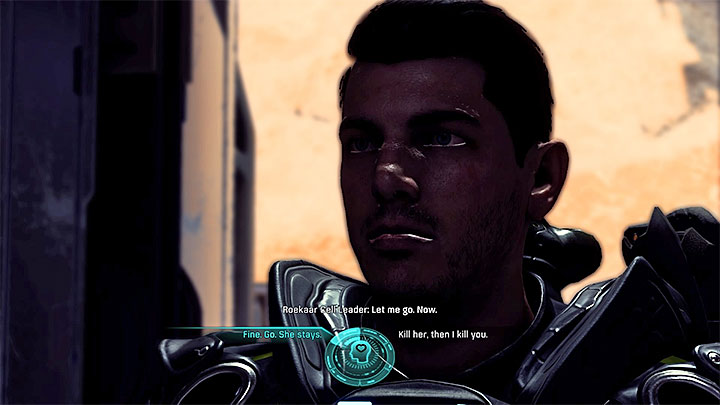 Decide how you want to approach the situation

A cut-scene will begin once you've unlocked the door. You'll encounter Roekaar Cell Leader who has Ruth Bekker at his gunpoint. You can now proceed in two different ways:

The quest will be completed regardless of your approach.