WARNING - The quest described below is Liam's Loyalty Mission. It means that this is the biggest and the most complex quest connected with that character. By completing it you can unlock Liam's highest, sixth, level abilities.

How to unlock: Receive an e-mail from Liam [Tempest].

Here you can find the guide for Liam Kosta: All In quest. This is one of the side quests in Mass Effect: Andromeda game that belongs to the category called "Allies and relationships". This quest is given to you by Liam. You must find Verand. You can do this by infiltrating an abandoned Kett spaceship which was overtaken by pirates. 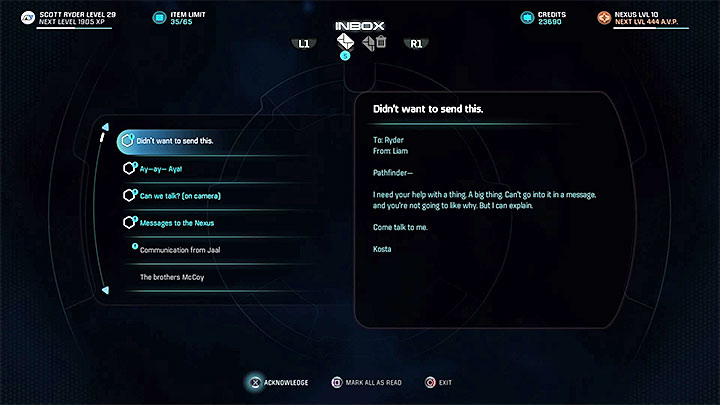 Read Liam's e-mail and meet him on Tempest

You should receive this quest after completing A Trail of Hope main quest, after you find Moshae Sjefa which was a request from Angara on planet Aya. When you return on Tempest after this quest you will automatically receive and e-mail from Liam. Read the message and meet with your comrade. Liam asks you to rescue his Angara associate called Verand. In order to find her you must visit the newly unlocked Sephesa system.

Go to the debris field in Sephesa system 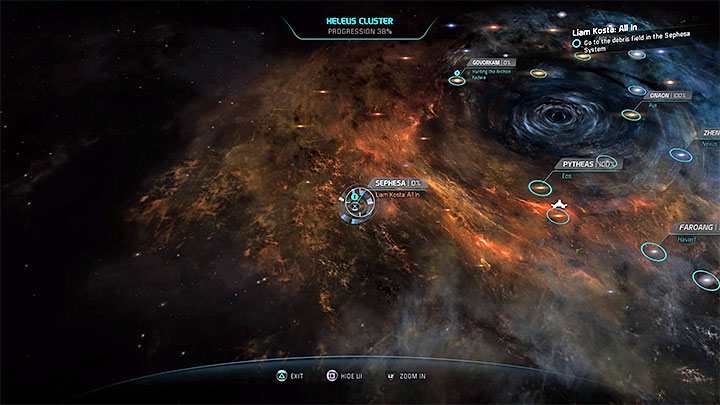 Sephesa system is unlocked when you start this quest and is located in the south-west part of Heleus Cluster. When you are in this system select Liam's Scavenger Debris Field as your destination. Wait for the game to zoom in and confirm the mission. Liam must accompany you during the search for Verand, you should think about your second companion so their abilities will complement each other (providing that Liam wasn't in your team during other quests). You will travel to Kett spaceship.

Check the cargo bay while looking for enemies

In the cargo bay you can find the first pirates accompanied by wild Adhi beasts. Begin the combat and eliminate all enemies, this shouldn't be hard to do.

Use the communicator to learn who is in charge 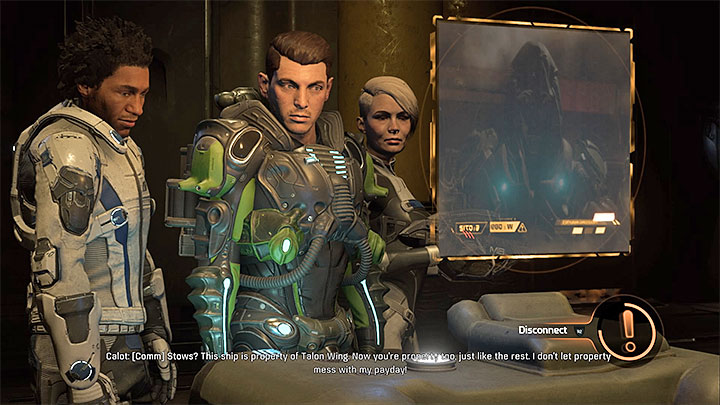 You can use a special action to "silence" Calot

The communication terminal is on the cargo bay's upper level. You learn that Calot is the pirate's leader. You can listen to the entire "conversation" with him or, during his speech, use a special narrative action to disconnect (this won't have any influences on the quest or its finale).

Break through the enemy lines and reach the cargo bay's exit

New pirates appears in the cargo bay so, after using the communicator, you must hide behind the nearby covers again. After the fights you must approach the exit door and open them by hacking the nearby console. A cut-scene will play. During it August Bradley will help your team.

Search the ship and look for prisoners 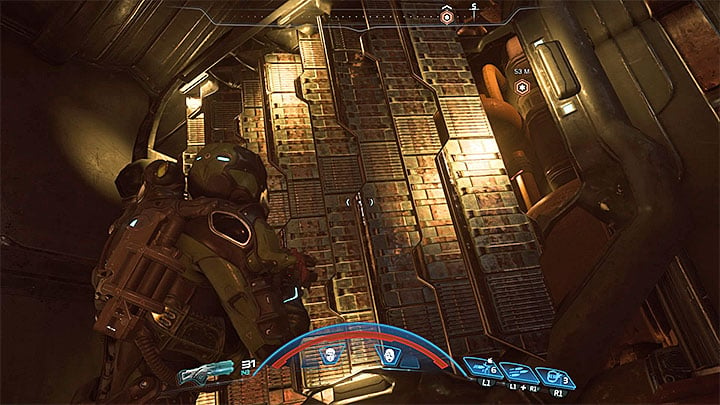 From now on you must deal with regular changes in Kett spaceship's gravity which means that you will walk on the walls or ceiling. This is not a serious issue, although you must use a lot of Jump Jets in order to avoid bigger obstacles. The first series of jumps must be performed in the starting location which allows you to reach the upper door. After opening them you must defeat new pirates, watch out for the elite saboteurs (first use attacks that destroy shields and then use the attacks that deplete their armor bars).

Continue your walk through the ship. During that you must break through a few small covers (by using, e.g. melee weapons) - one of them is presented in the picture above. In the next bigger room you must defeat another pirates and then reach the marked door. You will learn that you can't open them yet.

Find and scan the control hub 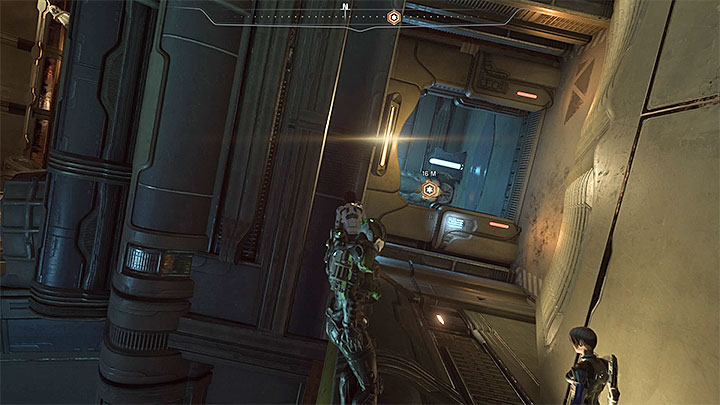 The control hub is presented in the picture above. It is located in the small area in the upper part of the location. In order to get there you must use a lot of Jump Jets (you can also help yourself by using the scanner indications showing your distance from the target). Scan the control hub and wait for Grace Lito's comment.

Activate the consoles and allow the engineers to get the access

Unlike the hub, the consoles are easier to reach. Interact with each one of them, you can also read the messages that are stored on them.

Break through and get to the prisoners 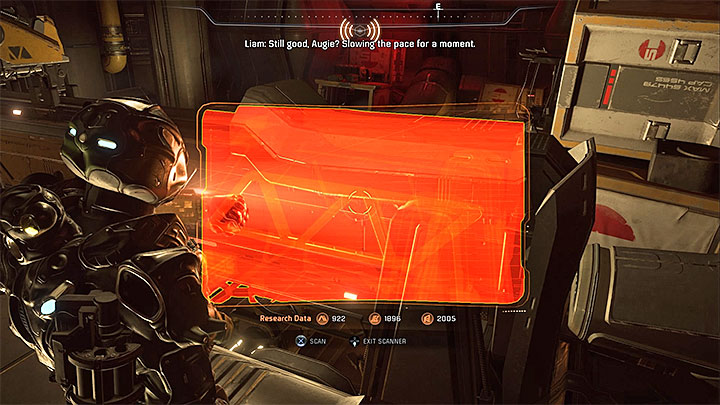 Go through the newly unlocked door and experience the new change in gravity - you are now in the upside-down cargo bay. Go straight and reach the crane presented in the picture above, you must scan it. You learn that the crane can be used to create an exit from the cargo bay. 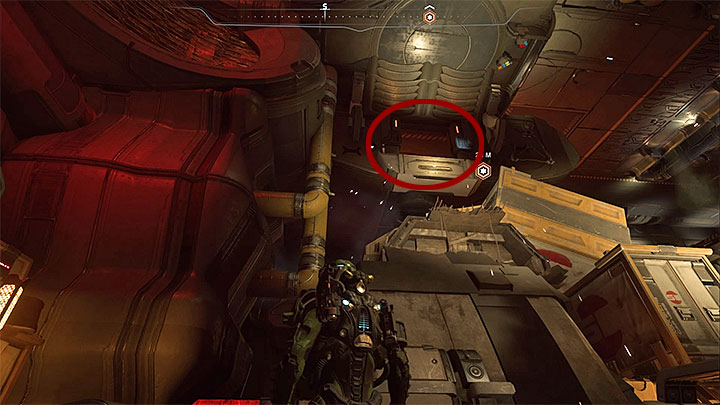 The next step is to reach the consol that controls the cargo crane. This is not an easy task because it is located in the hard to reach place. You must climb and reach the opening in the wall presented in the picture above. By doing that you can go to the reversed glass room. 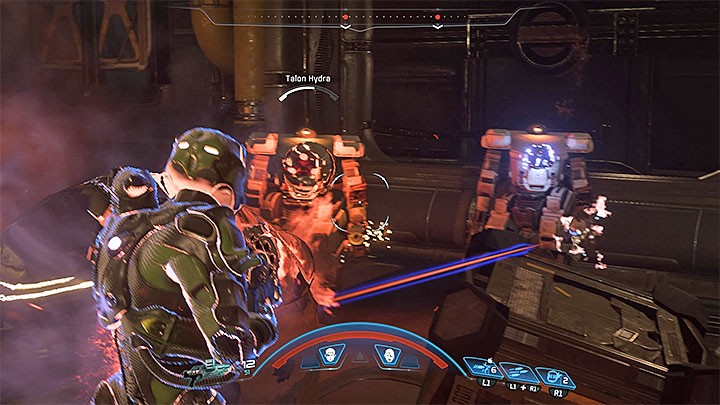 After using the console you can reach the exit by using the crane but be careful, new pirates will appear. You can attack them from a distance or quickly get near the door and use, e.g. shotguns or traps to eliminate them easily when they are entering the room. Regardless of your choice you can proceed further. Expect new fights.

In the next big room you must destroy two Talon Hydra machines. You can use the fact that the machines are slow and move quickly around the room or attack them from behind covers on one of the upper platforms. In both cases you should relay on ammo, skills and powers that are useful in destroying armors.

Speak with the prisoners through the communicator

After the fight you should search for the communicator and, by using it, speak with Cameron Dace and Verand. During the conversation you can ask additional questions about the pirates and the Kett spaceship.

Send the power to the bulkhead door 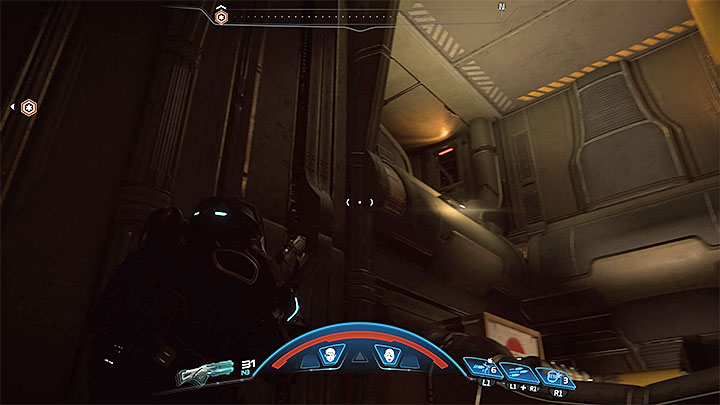 Look around and find the passage, presented in the picture above, that leads to the upper level (you must jump to reach it). There, you can find the new console which allows you to change the gravity.

You can now go to the place where Calot is (on your way there you can come across a few "regular" pirates). Before you enter the big room you must replenish your supplies because Calot serves as a boss. 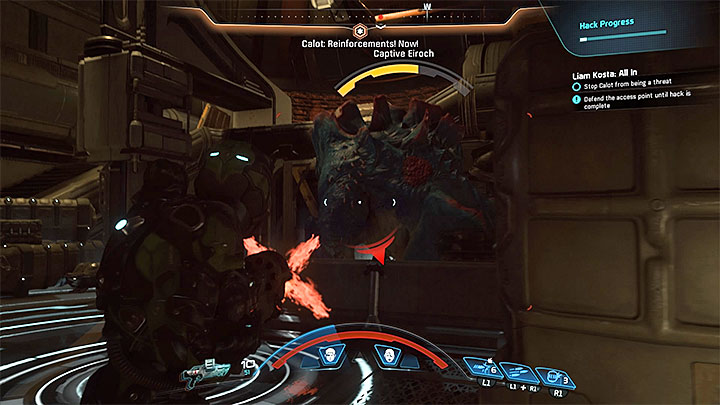 Watch out for Eiroch's attacks

In default Calot is located behind a powerful shield that can be pierced by normal attacks. You must perform actions that will disable the force field.

In order to destroy Calot's shield you must hack two access points. The first one is on the left from the starting point. When you reach it you must stay close to it so the hacking process can be completed. Sadly, this is related to one serious hindrance because nearby a captive Eiroch will appear. Do not allow this monster to get close to your character. USe shotguns, grenades, mines and skills that weaken enemies from a short or medium distance. 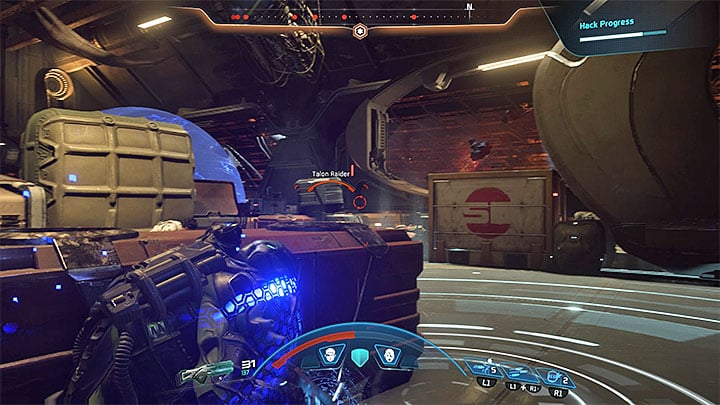 Shortly after that, the hacking process is interrupted and you must reach the second access point. It is located on the upper level, right from the starting point. It works in the same way as the first one so, after starting the hacking, you must defend yourself. In this case you must "only" fight with pirates and Adhi beasts. The enemies can come from two different directions so you should place your team mates on the left and right from the access point. 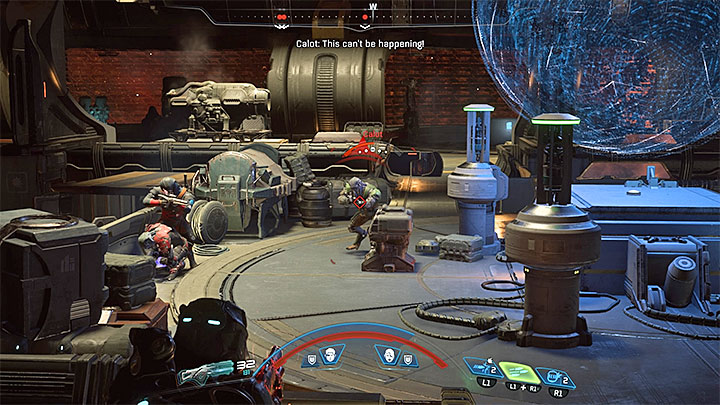 Calot can be killed from a long or short distance

Defend yourself until the hacking bar is completely full. The force field, behind which Calot was hiding, is now disabled. You don't have to rush in order to get to him because he won't regain the shield. First, deal with all pirates that stand between you and Calot. After their death you can get rid of their leader in any way that you want - fortunately, he is an easy enemy to defeat.

Look around the room where the battle took place or you can immediately reach the airlock control console. Thanks to it you will leave the Kett spaceship.

Participate in the briefing on Tempest

By returning on Tempest you complete this quest. Liam, Verand and August Bradley will participate in the briefing. You can suggest them to return to home or to stay for a while. You can now receive Liam's thanks. Don't forget to check out his newly unlocked abilities.

Rewards for finishing the quest: XP, access to Liam's abilities from the sixth level.