How to unlock: Speak with Liam [Tempest].

Here you can find the guide for Liam Kosta: Day Out on Aya quest. This is one of the side quests in Mass Effect: Andromeda game that belongs to the category called "Allies and relationships". This quest is connected with Liam and you get it after you meet him on Tempest after saving Moshae Sjefa during A Trail of Hope main quest. In this quest you must make a short visit on Aya and meet with Liam in the local bar.

When you reach a certain part in A Trail of Hope main quest (saving Moshae Sjefa from the Kett Cardinal) you can then meet with Liam on Tempest. He proposes a "trip" on planet Aya (the new unlocked areas to be more precise) an promises you to tell more when you get there.

Talk to Liam at the Tavetaan on Aya 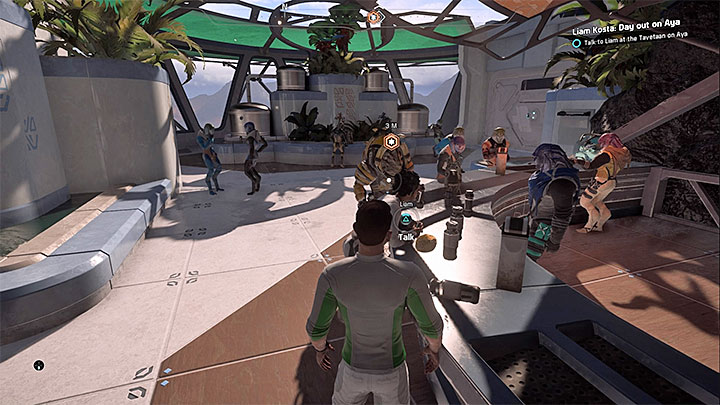 Meet with Liam in Tavetaan

Liam can be found in the bar in the location called Tavetaan. Go there and talk with him (Nakmor Drack is also next to the bar but you don't have to talk with him). During the meeting, Liam asks you to scan booths of one of the opposing merchants.

Scan the booth of the opposing merchant

Head to the market and try to scan the items sold by Xaana Ingila who refuses to sell his goods to newcomers. The scanning won't go as planned but, despite of that, the quest will be updated.

Talk to Liam at the Tavetaan

Return to Liam and speak with him again (during the conversation you can be more or less understanding). The conversation with your team mate completes this short quest.