How to unlock: The quest is unlocked automatically after Meet the Family, one of the side quests found on Voeld.

This section contains a walkthrough for Remove the Heart, one of the most demanding Heleus assignments found in Mass Effect: Andromeda. You can take it up during your stay on Voeld once you've completed Meet the Family. The quest sees you attack one of Kett bases located on the planet. 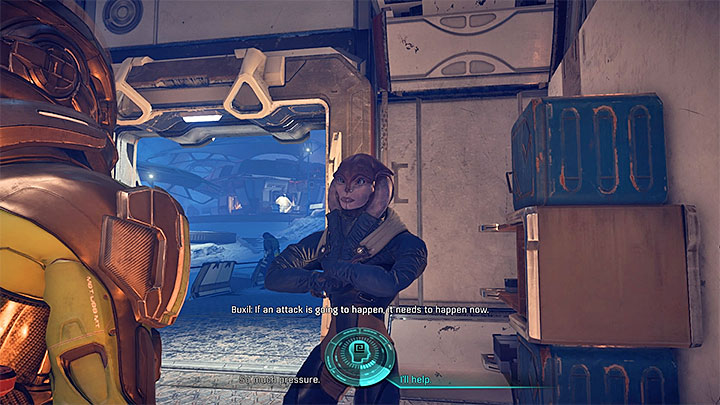 To unlock the quest, complete Meet the Family, one of the side quests taking place on Voeld. The said quest ends up with a conversation with Buxil, one of the angara found in Techiix. The delivery of Kett codes enabled the resistance to respond in force. Buxil will tell you about a Kett base that can be easily infiltrated.

A very simple objective. Travel to Ja Niihk Dig Site, an ancient city surrounded by a Kett shield, and listen to a conversation regarding the origins of its power supply.

Investigate the Kett base 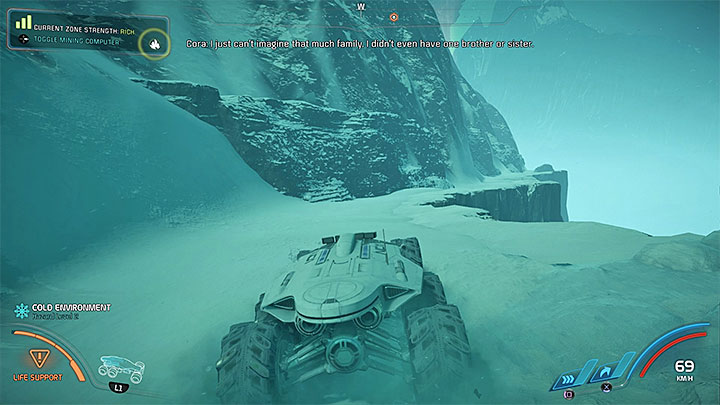 The Kett base is beyond the mountain walkway

The mountain walkway to the Kett base can be found in the south-eastern part of the map. Disregard the initial quest markers, as the new ones will appear along the way. The base is at the base of a mountain that has to be circled in a counter-clockwise manner. You can activate a forward station and encounter an eiroch along the way. Finally, you should encounter a cave - leave Nomad and proceed on foot. 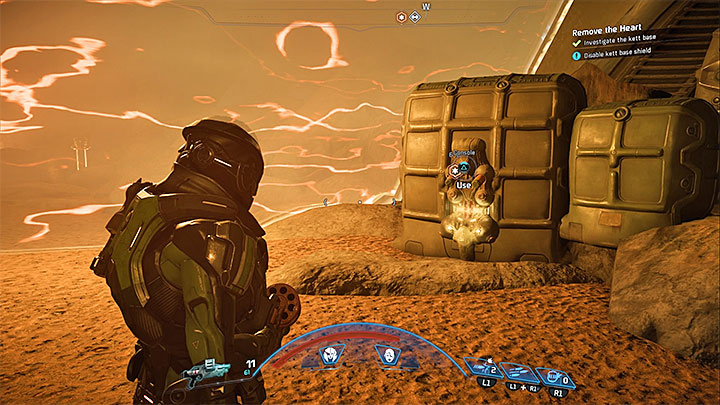 Use the console to disable the force field

Move through the cave while fighting against Kett forces and camouflaged creatures. Soon you'll reach an active force field - listen to a conversation with Buxil and use the received encryption codes to turn it off. You should finally reach the exit. Use the mountainous path ahead to access the base that should now be visible in the distance.

Note - Once you've managed to enter the main part of the base, you can also disable the security system, which is a part of Fact or Fiction. Consider making a small detour before completing further steps of the currently described quest. 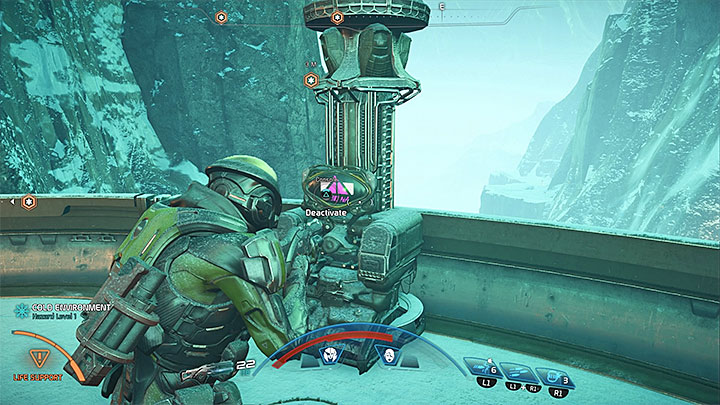 One of three generators

The generators are located in different parts of the base - you can access them in any order. You'll be facing kett troopers, as well as turrets - you can either destroy them (they are quite durable) or use the fact that the turrets are immobile and stay out of their range. Moreover, overriding each generator results in a wave of reinforcements that converge on your position.

The terminal can be found in the southern part of the base. Find a way to access the floor above and interact with the terminal to sabotage it.

Use the footbridge that can be found in the western part of the base. It will lead you to a room with a new console - use it. Jump into the large hole in the floor and proceed forward until you find the hangar bay, which is the last major part of the outpost. 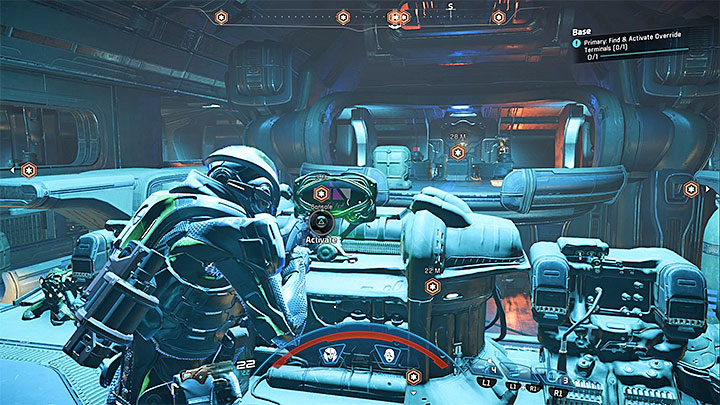 An override terminal - access the one that is closest to you

The platforms can be found in different parts of the bay. Unfortunately, sabotaging them is not that easy of a task. The game won't allow you to simply sabotage the chosen platform, as first you'll need to find one of the override terminals and activate it. Aside from all that, you'll also have to face the Kett guarding the hangar and eliminate them to have a free hand in dealing with the platforms. Focus on the "elite" Kett, as one of their abilities allow them to camouflage nearby troopers. 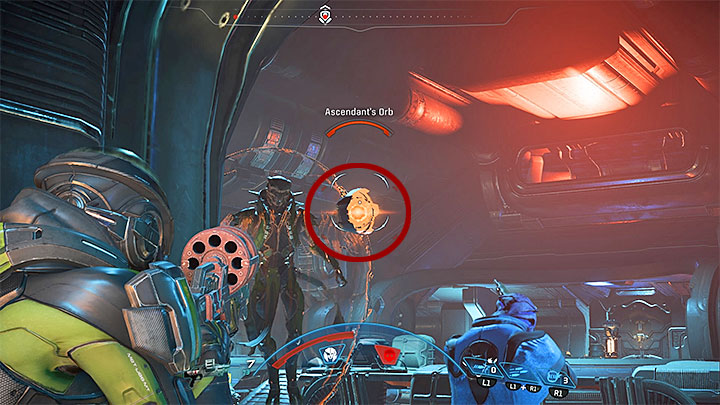 The Prefect represents a very powerful group of Kett known as the ascendants. Your opponent is armed with a number of abilities, including powerful attacks such as globular thunderbolts that deal energy damage, while the prefect herself is guarded by an energy shield that renders your attacks ineffective. To get past the shield, focus your fire (you can either choose pick it from a distance using a scoped weapon, or simply get close and use the shotgun) on the small orb that floats around the Prefect. Once you've managed to destroy the orb, the Prefect will become vulnerable to your fire - from that moment consider using armor-piercing abilities and weaponry, as they are the most effective against your opponent.

Once you've defeated the prefect, take care of the remaining kett found in the hangar - some of them may be found on the other floors of the building.

Proceed to the elevator and use it to reach the highest floor of the base. Use the final console - Voeld viability will increase with additional 10 %. 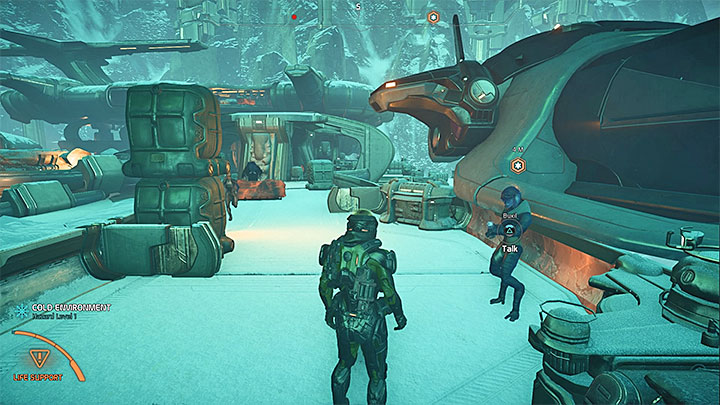 You don't have to double back through the whole base. Buxil will appear in the part of the base where you've sabotaged the generators (see the screenshot above). Talk with him to complete the quest and unlock Uncovering the Past - a new quest that involves visiting the previously encountered ancient angara city which is now accessible thanks to the disabled shields.

Rewards: XP, Andromeda Viability Points, Uncovering the Past (a new side quest)