How to unlock: Finish Eyes on the Ground quest [Voeld: Hjara].

Here you can find the guide for Stage a Rescue quest. In default this quest is treated as a Priority Op (main storyline quest) in Mass Effect: Andromeda game. However, if you decided to do the quest on Havarl first (Helping Havarl's Scientists) then this quest is moved to "Heleus Assignments" tab in your journal. Because of that it becomes a side quest but you can still take it and complete it in the same way as when it would be a main quest.

This quest is the continuation of the previously described one called Eyes on the Ground. You must get to the Kett prison where you can find the captured Angara and free them. This allows you to gain Angara trust.

Go to the Kett prison

The Kett prison can be found in the north of the map and you should have no problems with getting there. 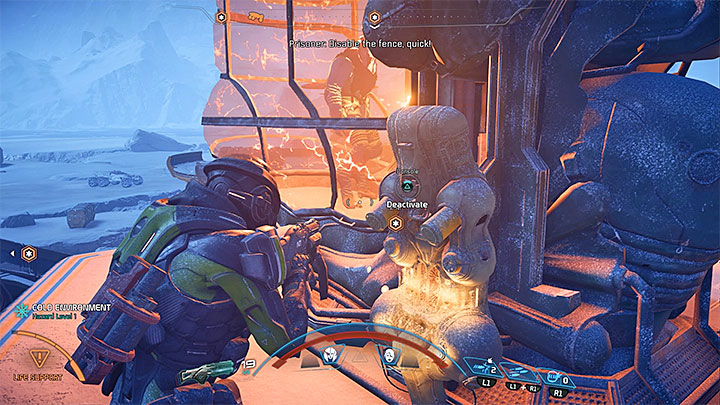 Deactivate the consoles to free the Angara

The Angara are kept in marked cages. You can free them immediately or do it after securing the entire camp. If you free them prematurely, they can help you in the fight but their lives may be in danger. However, defeating Kett alone shouldn't be difficult but you must watch out for the enemies on the upper levels. You should also take into consideration the fact that shortly after the fight starts you will have to face the reinforcements.

Regardless of your choice of saving the prisoners you must approach each cage with the activated force field and interact with the control console.

Speak with the rescued Angara

After the fights you should speak with Niilj. Additionally, he gives you a data drive with Kett code which is connected with other side quest called Meet the Family.

Warning - If you did this mission before the quest on Havarl (Helping Havarl's Scientists) then completing it allows you to gain Evfra's and other Angara's trust. In this situation you can continue A Trail of Hope quest (contact with Evfra when you are on Tempest).