How to unlock: Automatically during A Trail of Hope quest [Aya].

Here you can find the guide for Meet the Resistance quest. By default this quest is treated as a Priority Op (main storyline quest) in Mass Effect: Andromeda game. However, if you decided to do the quest on Havarl first (Helping Havarl's Scientists) then this quest is moved to "Heleus Assignments" tab in your journal. Because of that it becomes a side quest but you can still take it and complete it in the same way as when it would be a main quest.

In this quest you must visit planet Voeld. When you are there, you must contact the titular resistance and learn how you can help Angara.

Warning - Voeld's climat is unfavorable. During this quest and all others that take place on Voeld you must remember about a few things: 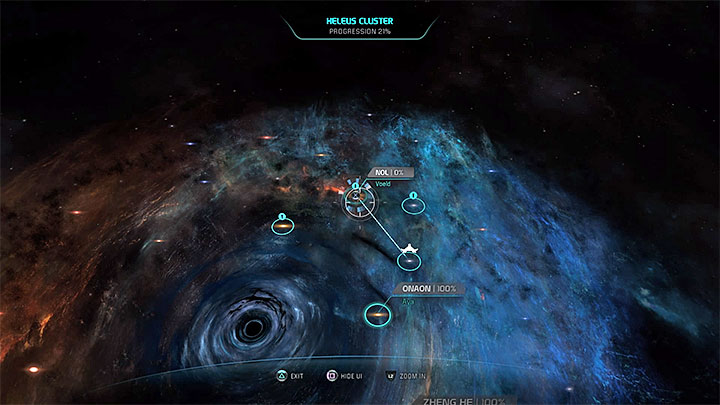 Nol System is in the north part of Heleus Cluster

Planet Voeld is in Nol System (north part of the cluster) which is unlocked by progressing in the storyline. After the flight you should search for a landing spot and select it.

You start in the west edge of the map, near the Resistance Base. Follow the linear path to that location and meet with the Resistance commander Anjik Do Xeel. During the meeting you can offer your help.

Warning - Before you leave the Resistance Base you can unlock a few side quests from Angara. Their markers are visible on the base's map.

Speak with the Resistance lookouts

The lookouts can be found on the edge of the cliff near the east exit from the base. When you are there, speak with Beniska about every possible topic.