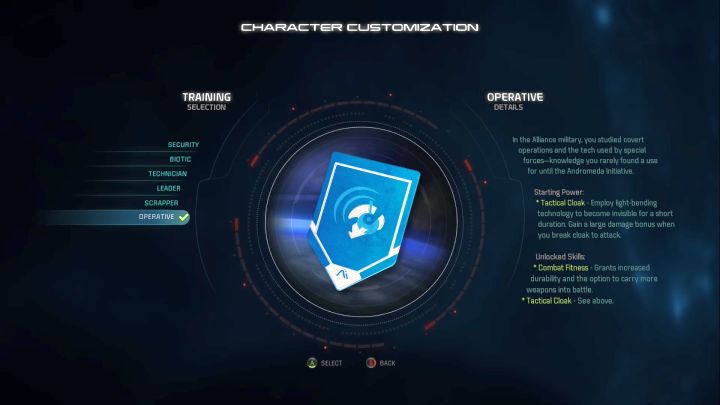 The Operative training is the equivalent of the Infiltrator character class from the previous installments of the series. It focuses around the usage of Combat and Tech skills and gives the following benefits:

This training is ideal for players that want to use both Combat and Tech skills to create an assassin attacking from the shadows and dealing gigantic damage with firearms. Tactical Cloak allows you to take the enemy's attention off your character, but the most important factor is the increased damage dealt during the first attack. By properly developing this ability you will be able to severely increase the damage bonus, as well as make the camouflage (and the bonus damage) last two seconds after the first attack. Thanks to that, your character will deal twice the damage during those two seconds. Combat Fitness will increase the durability (health) of the character and allow you to carry more and heavier weapons.

The biggest flaw of this training, as well as focusing around Tactical Cloak, is the fact that your damage output will decrease significantly when the ability is on cooldown and the fact that you have to invest a huge amount of skill points into both Combat and Tech trees for this build to be effective.