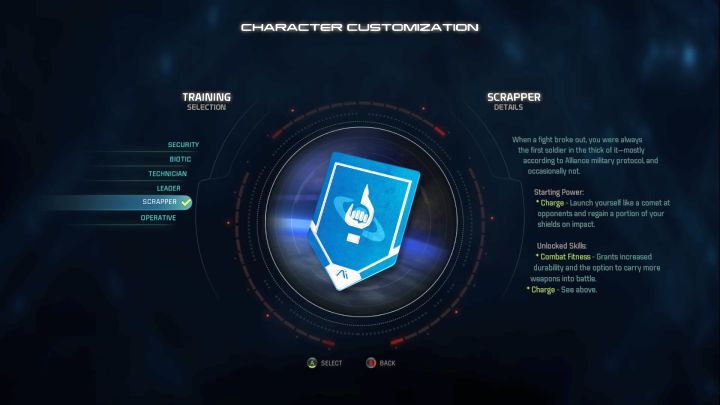 The Scrapper training is the most similar to the Vanguard character class from the previous installments of the series. The training focused around the usage of Combat and Biotics skill trees and gives the following benefits:

This training is ideal for players that want to make a hybrid character using both Combat and Biotics skills. Charge is a perfect ability for a character focused around close combat, especially one equipped with a shotgun and/or powerful melee weapon. The ability allows the character to charge at the enemy from a considerable distance, deal damage and restore shields. The enemy then can be finished with the mentioned weapons. The passive ability, Combat Fitness, has a good synergy with Charge - it increases the durability (health) of the hero and allows him/her to carry more and heavier weapons.

There are two major flaws with this build. First things first, it forces a close-combat style of gameplay to make full use of the Charge ability and it can put you into a dangerous situation. Furthermore, you need to invest a huge amount of skill points into both Combat and Biotics skill trees for this build to be effective.