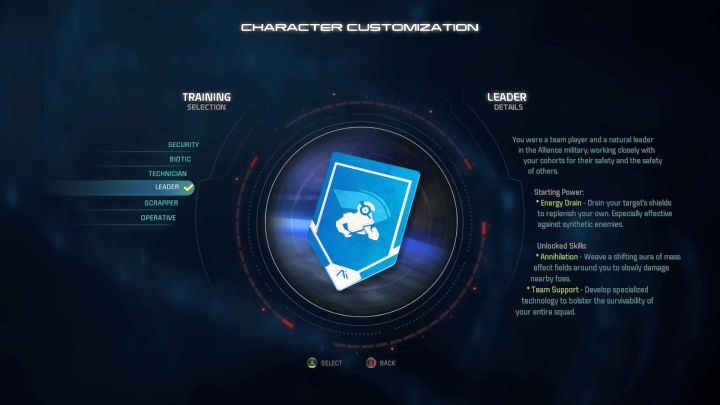 The Leader training is most similar to the Sentinel class from the previous installments of the Mass Effect franchise. This training is focused around the usage of Biotics and Tech trees and gives the following benefits:

This training is ideal for players that want to play as a hybrid character, combining the characteristics of Biotics and Tech trees. Energy Drain is extremely effective against enemies equipped with powerful shields - it negates the biggest flaw of the characters focused around Biotics, their low effectiveness against shielded foes. Additionally, it has a good synergy with Annihilation - the latter ability primes all affected enemies for combo detonators and Energy Drain can detonate them, dealing huge damage to everyone in the area. Properly developed Team Support will allow your team to become almost invincible.

The biggest flaw of this training is the fact that you need a huge amount of skill points invested in both Biotics and Tech for it to be effective. As a reward you will be given an extremely powerful character, capable of annihilating anyone on the battlefield and supporting the team if needed. Keep in mind that, like with both Biotic and Technician, you won't be able to use heavy weapons, unless you want to severely decrease recharge times of abilities.