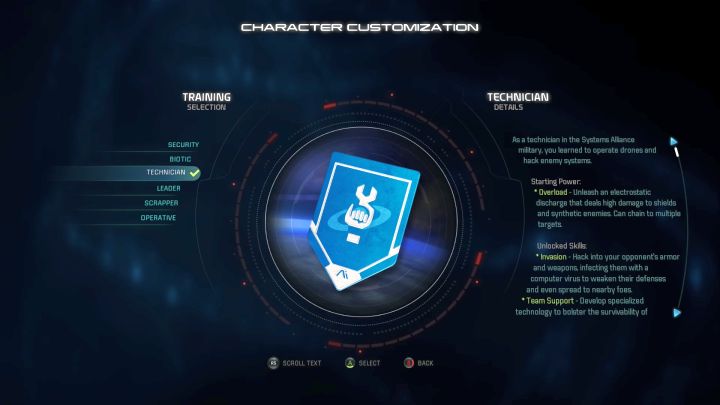 The third and the last "pure" training resembles the Engineer class from the previous installments of the Mass Effect series. This training is focused around the Tech skill tree and gives the following benefits:

This training is ideal for players that plan to prepare a character focused around the abilities from the Tech tree, ignoring the ones from the Biotics and Combat trees. This training (and focus on the Tech tree abilities) is extremely effective when dealing with difficult enemies, especially ones equipped with powerful shields - Overload deals immense damage against shields, as well as synthetic enemies, such as Remnants who you will be fighting throughout the entire game. Invasion is a powerful debuff ability which can severely weaken a small group of enemies and properly developed Team Support can make your team almost invincible.

Similarly to the Biotic training, the main flaw of this one is the inability to carry more weapons, but it's somehow compensated with another passive ability that can severely (40%) increase the carrying capacity of the protagonist.