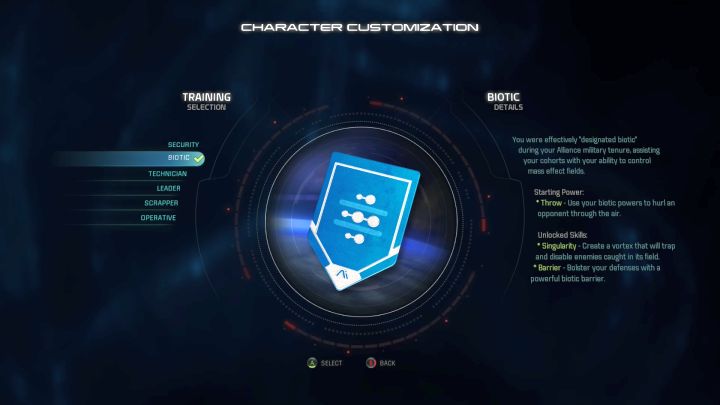 The second training to choose from is very similar to the Adept class from the previous installments of the series. This training focuses around the usage of Biotics and gives the following benefits:

This training is ideal for players that want to focus their gameplay around the abilities from the Biotics skill tree, sacrificing the skills from other trees, as well as the ability to carry more weapons and deal increased damage with them. Because of the Singularity ability, this training is extremely powerful during the first hours of the game, when the enemies aren't protected by shields and/or armors and the ability will lift them into air. Additionally, it primes them for combo detonators, such as your Throw ability. The Barrier ability, with proper development, will allow you to instantaneously restore your shields when the health of the protagonist drops below 20%.

The biggest flaw of this training (and the focus on Biotics) is the low damage against enemies protected by shields, as well as the low effectiveness of firearms and weapons used in melee combat.