Character creation of the protagonist in Mass Effect Andromeda severely differ from the one we know from the previous installments of the series. There is the option to customize the looks (or to stick to the characters prepared by the developers) or the gender, but there's one significant difference - there's no class system in Andromeda. You won't be able to choose from classes like Adept or Infiltrator. Instead, you will have almost complete freedom of selecting the abilities for your character.

In this and following chapters you will learn everything about the character creation process - how the look of your character, as well as his/her twin will influence the appearance of Alec Ryder (the father of the Ryder twins). Additionally, you will find information about all 6 trainings (class-like system in Andromeda) and the consequences of choosing each of them.

Note - remember that the information presented in the following chapters are general only guidelines. There's nothing stopping you from, for instance, turning a character with Security training into a pure Biotic. 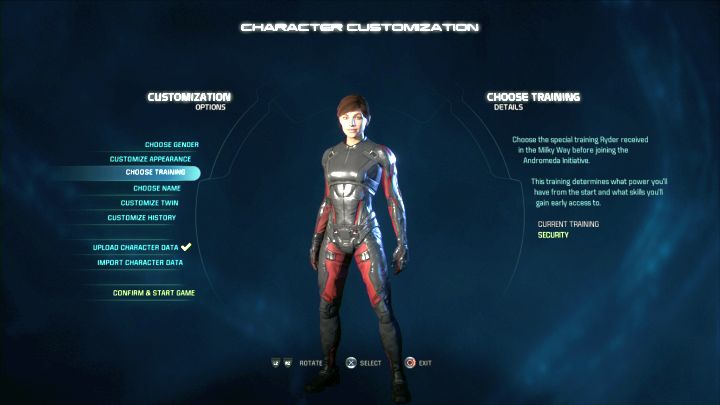 You can customize the appearance of both your character and his/her twin.

At the start of the adventure you will be able to customize the appearance of both your character, as well as his/her twin. Everyone will be able to create their own ugly, monster-like character, use one of the presets prepared by the developers, or try to recreate Shepard from Mass Effect 1-3.

What's interesting is the fact that the appearance of the twins influence something else - how will the father of the twins, Alec Ryder, look. By using the default look of both of the twins you won't change the look of Alec, as the game will also use the default look. If, however, you create your own character and severely modify his/her look, the appearance of the parent will also change - he will have characteristics, like hair and skin color, of both of the twins. Note that if you create twins that differ greatly in looks from each other (like, for instance, when one is white and the other one is black) the game will make the father similar to the player's character, not the other twin.

The selection of the gender doesn't have any impact on the gameplay - you won't have access to other quests or plot twists. The only difference that the gender influences is the type of character you will be able to romance. Further information about that can be found in "Romance - who can you flirt with?" chapter, as well as chapters about romancing specific characters.

Selecting training is a crucial decision that you have to make at the beginning of the adventure in Mass Effect Andromeda. Even though the game doesn't have a pure class system like the trilogy, type of a selected training still have a great impact on the development of your character, especially during the first 10-15 hours of game.

The type of the training you've chosen won't influence the weapons you'll be able to use, the amount of health and/or shields your character will have, Credits or number of skill points, as it remains the same regardless of your choice. It will, however, change the type of ability you start with, as well as the abilities you will be able to unlock when you reach level two. You should especially pay attention to the latter, as a large number of skills requires you to invest at least 9 points in a given skill tree (out from 3: Combat, Biotics and Tech - more on them can be found in the chapter about character development) to even unlock them.

By selecting the right training type you can gain access to powerful abilities as soon as you reach level two (when you gain skill points to distribute) - otherwise you will need to advance your character to at least level five and invest all the points you've gained (9) into a single skill tree.

In the following chapters you will find descriptions of all 6 available training types: Security, Biotic, Technician, Leader, Scrapper and Operative. All of them will give you access to a specific starting ability, the one you will be able to use from the beginning, as well as 1-2 unlocked ones - the ones that normally require 9 points into a single tree to unlock and which will be free for you.

Note - even though you can easily reset skill points and redistribute them into different powers, the training type can't be changed. The one you selected at the start of the game will stick with you till the end - examine each one of them before deciding!