Meet up with the Angara

Go to the Onaon system 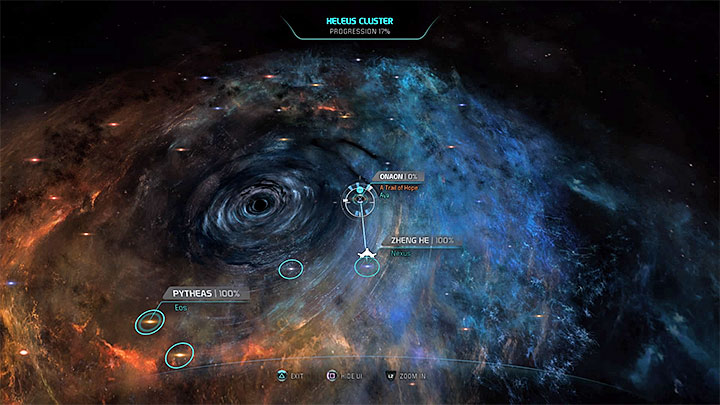 Open the galaxy map and choose Onaon system which was unlocked after completing A Better Beginning main quest. A cut-scene where you speak with Archon (Kett leader) plays right after you get to that system. After that you automatically appear on planet Aya where you are greeted by Paaran Shie from Angara race (Aya's governor).

It is a very simple mission objective. Stay close to Paaran Shie and don't worry about the inability to freely explore the market, you can do that in the later part of the game.

Interacting with the door initiates the dialog between Jaal and Evfra. After that Jaal automatically joins your team and you can meet him when you return on Tempest. Besides that you also unlock First Steps trophy.

After meeting with Evfra you learn that before you get access to Remnant vault you must gain Angara's trust first. This happens by helping them on one of their planets:

Warning - After completing one quest on Havarl or three on Voeld you can continue this quest. A very valuable information is the fact that your decision, whether you want to help Angara on Havarl or Voeld, is not definitive. All quests that you didn't take are still available in the later part of the campaign (you can find them in "Heleus Assignments" tab in your journal).

Return to Tempest (when you are in the docks you can also unlock a few side quests) and select the Angara planet that you want to visit (the quests on Havarl and Voeld, mentioned above, are described in the next pages of this chapter). Additionally, you unlock Full Roster trophy.

The conclusion of the Angara situation has led to a new emergency. Board the Tempest and visit the conference room, which is located on the top floor of the ship. Use the vidcon to establish a connection with Evfra.

Travel to Nol system and meet up with Voeld resistance 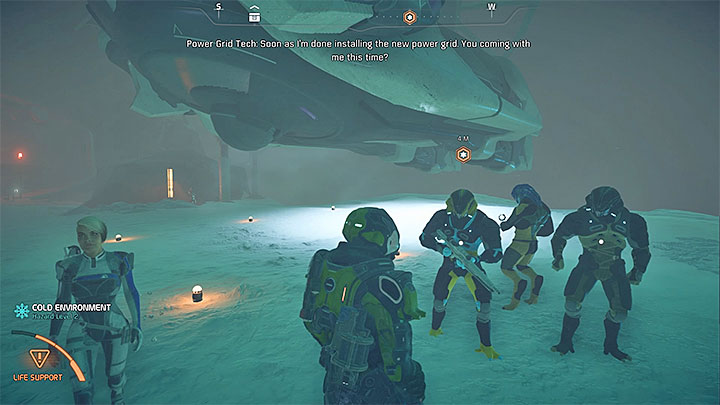 There is a possibility that you've already visited Voeld during one of the previous quests. In case you've chosen to help the Angarian population on Havarl, the second planet can be found in the Nol System. Once you've managed to land on Voeld, make your way to the resistance headquarters. The meet takes place west from the base itself. You'll be able to find the area easily if the Tempest is still using its first landing area. If you've managed to establish an Initiative outpost, use the forward stations to travel to the resistance headquarters and use the western exit. Make your way to the meet and talk with Commander Heckt (who can be seen on the screenshot) and other resistance members to begin a mission that involves storming the kett outpost and rescuing Moshae Sjefa.

Note - The next part of the quest takes part in a unique location that isn't a part of the Voeld worldmap. Decide upon the choice of the final companion, as Jaal has to take part in the operation. Moreover, you'll need to complete the mission in order to be able to leave the new area and return to your travels. 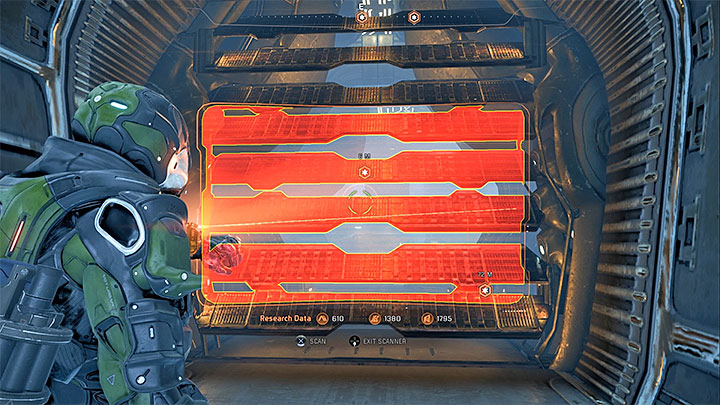 The mission begins outside of the Kett facility that is surrounded by a force field. Approach the force field and locate the service panel. You can hack it in order to create a hole in the field that will serve as a passageway for all team members. Approach the building and take care of two wraiths that will attack your group. You'll need to infiltrate one of the ventilation tunnels. One of them can be seen on the screenshot above - use your firearm or a melee weapon to destroy the beams.

The way forward is filled with numerous Kett. As always, watch out for Chosen, as well as camouflaged beasts that can surprise the team with an unexpected pounce. Talk with Commander Heckt and Skaelv once the area is cleared. 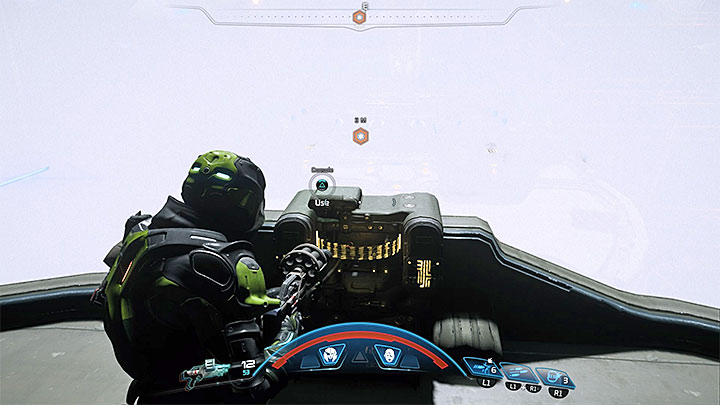 Use the console once you've eliminated the Kett

Proceed through the decontamination chamber and enter the next part of the base. This part of the level is more complicated - you can either visit the quest areas as quickly as possible, or engage in exploring and investigate all the side rooms and corridors. The second option will result in a number of new viable objects to scan or to pick-up (including numerous datapads)

Enter the final room to defeat the ketts and approach the eastern console. Using it will initiate a cut-scene that will mark the first appearance of The Cardinal.

Find out the location of the pods 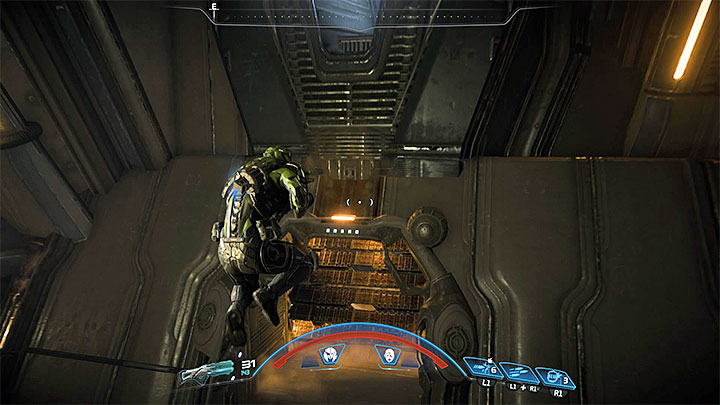 Proceed through the newly unlocked southern entrance, and start moving through the base. The final part of your journey will involve climbing onto a ledge shown on the screenshot above. You'll find yourself in a ventilation shaft - use a melee weapon, firearm, or a biotic ability to destroy the beams that are blocking the way forward. Once the way is cleared, approach the console and disable the force field.

The room beyond the force field holds a set of pods. Scan all of the objects and interact with the console nearby - SAM will learn that Moshae Siefa's pod has been moved.

Proceed north-east to find a door sealed with a pressure-sensitive lock. Interact with the door to initiate a new cut-scene starring The Cardinal, which will allow you to make an important discovery about the Kett. You'll begin the next sequence battling a few Destined - consider using area of effect abilities (grenades, biotics, etc.) to weaken their combat capabilities. Once you've taken care of the threat, talk to Jaal to console the brooding Angara.

Engage the incoming kett and travel to the elevator nearby which was used by the Cardinal. You'll be treated to a short cut-scene. Once you emerge on the new floor, interact with the door to enter a multifloored docking area. Pursue the fleeing kett ship to begin the encounter with the cardinal. 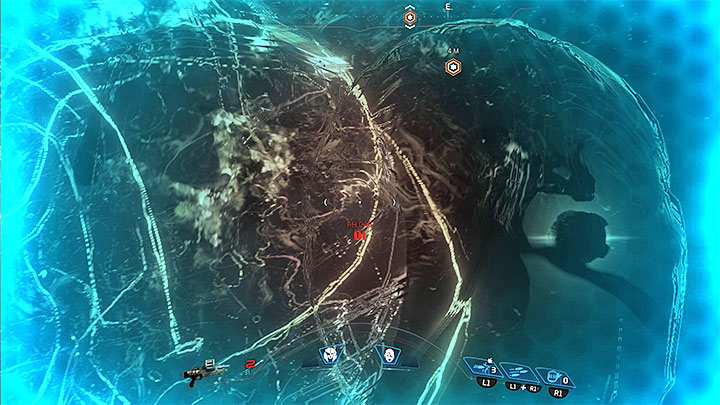 Stay away - if you aren't careful, the cardinal can transform you into a kett

A Kett Cardinal is quite a demanding enemy, forcing you to use cover and employing all of your combat abilities. Moreover, careless actions can result in a permanent death, as the cardinal has an ability to catch and transform the chosen opponent into a kett. If you are unable to dodge and jump back from the enemy, your hero can fall victim, which ends the game prematurely. To avoid the deadly attack, avoid close-quarters combat when dealing with the Cardinal. 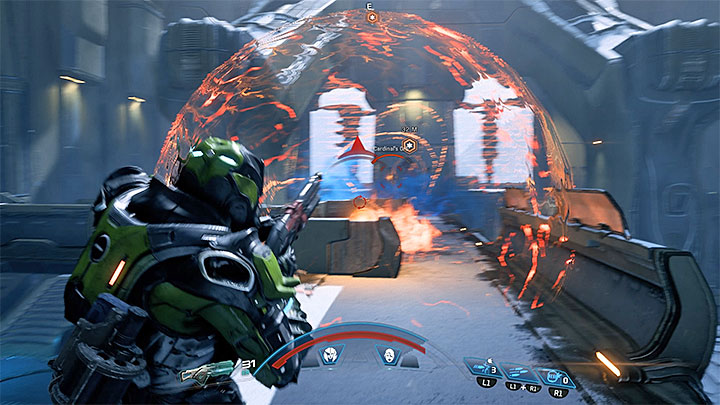 Moreover, your enemy can create an energy sphere (shown on the screenshot above). The sphere erupts and increases in size instantly - if you weren't able to escape from the affected area, you can lose your shield and additional damage that will decrease the number of your health points. Fortunately, the encounter takes place in a large, diverse location, so you should always be able to escape the blast. 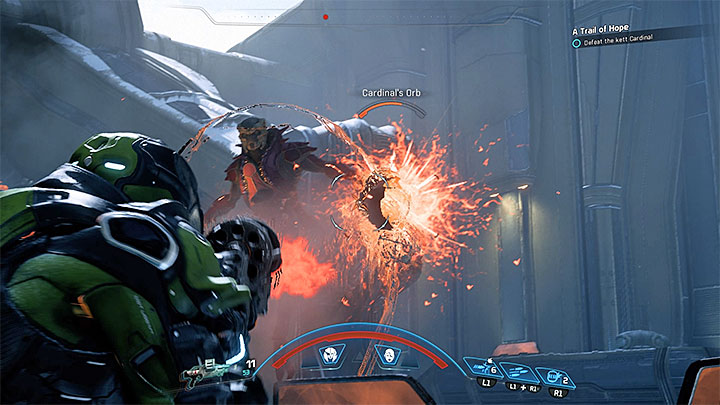 A Cardinal is an ascendant - this means that she is surrounded by a force field mitigating most of the damage dealt. Avoid wasting your ammo on the force field itself, and focus your fire on a small orb that floats around the opponent. 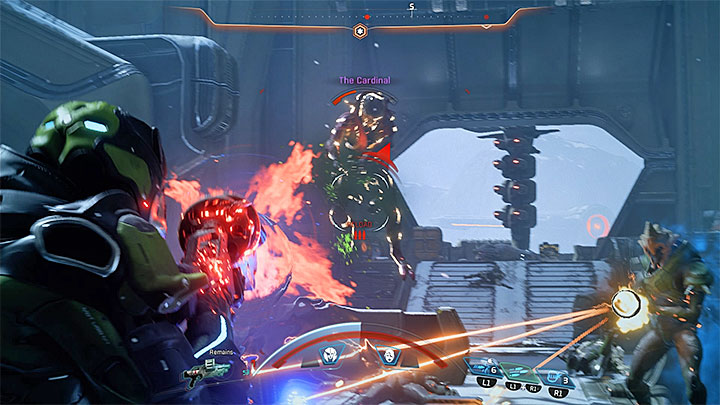 Once the shield is off-line, attack the cardinal using your best weapons and abilities

Once you've destroyed the sphere, act quickly, as the force field will be disabled only for a limited period of time. Use your best weapons and abilities to attack the weakened Cardinal until the force field comes back online. Then, repeat the whole procedure until your opponent is defeated. 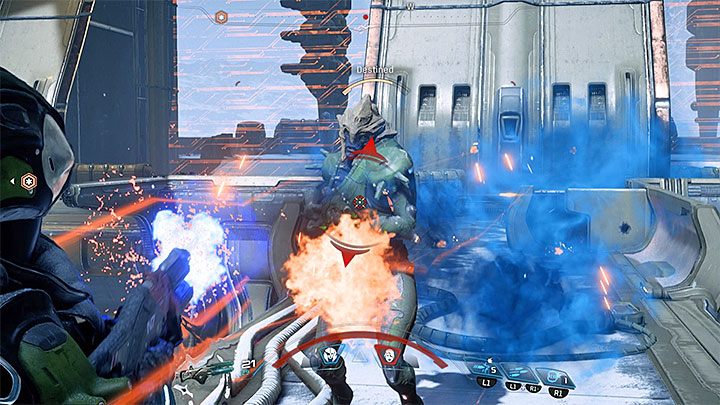 The Cardinal battle can take even up to a few minutes, especially if you've chosen one of the higher difficulty levels. You are also constricted by your ammo supply - make a go for one of the supply crates to replenish your ammo and biotic levels. 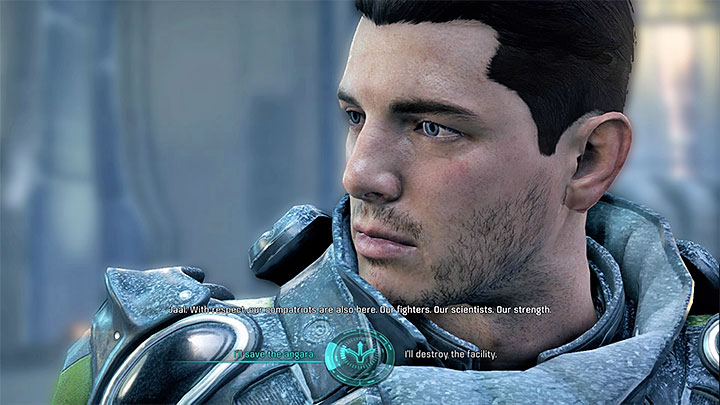 You've managed to defeat the Kett Cardinal and rescue Moshae Sjefa. Use the opportunity to explore the area in search of new valuables or objects to scan. When you're ready, talk with the rescued dignitary to complete the mission. During your conversation you can decide upon the fate of the cleared facility: 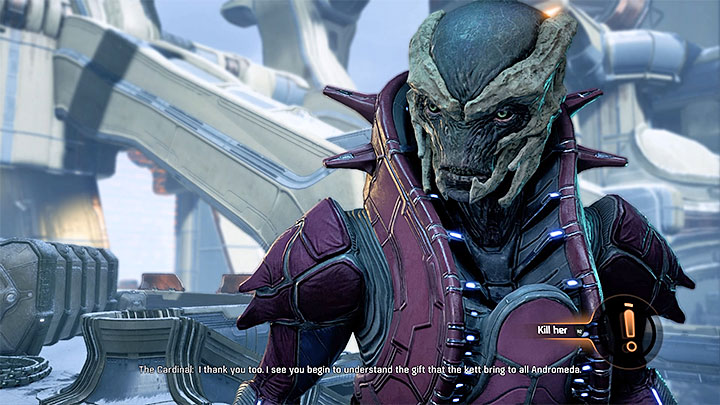 If you've chosen the first variant, you'll also be left with the decision on how to proceed with the Cardinal. You can choose to eliminate her (Wait for the moment when a special action icon appears (the screenshot above) and use it to eliminate the ascendant), or simply spare her by staying inactive.

Note - If you've decided to destroy the facility, the second choice won't be available, as the cardinal will die along with the outpost.

Attention - If you decide to keep the facility intact and spare the Cardinal, you can count on additional angara support in the game's finale. However, it's not a significant change.

Escort Moshae to the edge of the roof

Once you've regained control over your character, make your way to the edge of the roof to await exfiltration. Stay within the energy field generated by Moshae Sjefa to regenerate shield levels and have an easier time defeating the opponents guarding the landing zone.

Wait for the extraction 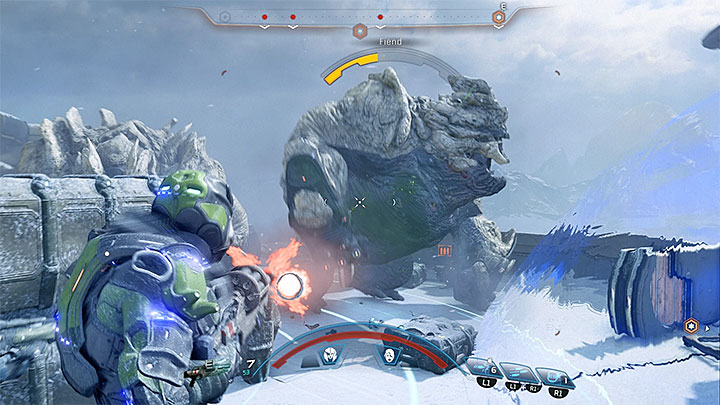 Your team has to hold the landing zone against the incoming Kett. You can proceed in two ways: either stay in cover for 90 seconds while fighting against the approaching enemy, or eliminate a Fiend that appears on the roof during the sequence. The second choice is much more palatable, considering that the fiend will interfere and try to approach your position. To defeat the monster, make use of mines and grenades (remember that the fiend is heavily-armored) as well as close-quarter weapons, such as shotguns. Regardless of the chosen approach, avoid his melee attacks, as these are quite powerful.

Once you're aboard the Tempest, you'll begin a conversation with Moshae Sjefa (you can talk to her again before embarking on the next phase of the quest).

Visiting the vault on planet Aya

Return on Aya with Moshae

When you are in the galaxy map screen select planet Aya and go there. After the landing a cutscene will play where rescued Moshae Sjefa is welcomed by other Angara. During the meeting you learn that you now have the access to the Remnant vault on the planet. 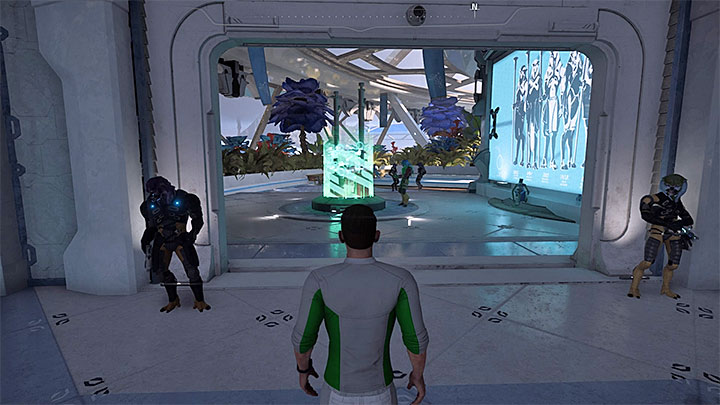 Warning - From now on you can visit previously inaccessible regions on planet Aya. You can access them by going through the gate presented in the picture above. Beyond the gate you can unlock new side quests, meet new merchants but also find new items to collect and scan.

Use the shuttle and get to the vault on Aya 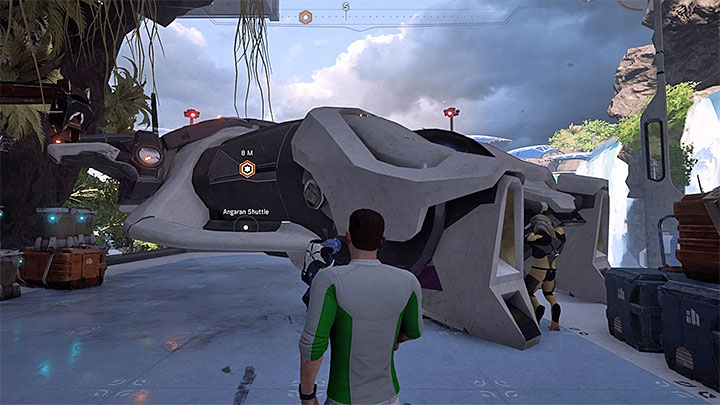 The shuttle can be used whenever you want

The shuttle can be found in the docks and you can use it immediately or do it after visiting the newly unlocked areas in the city of Angara. The shuttle takes your team to the vault. After getting there you have to watch a long cutscene and, after that, you can speak with Moshae Sjefa.

Meet with Evfra in the Resistance Base

The Resistance Base is in the west part of the city. When you are there speak with Evfra and Moshae Sjefa. From this meeting you learn that you must visit Kadara. You also unlock a new main quest - Hunting the Archon.