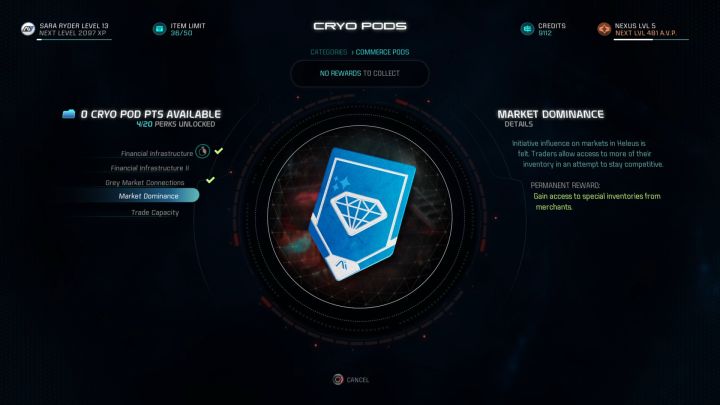 Andromeda viability (AVP) screen where you can open Cryo Pods.

Cryo Pods points allow you to open Cryo Pods located on the Nexus, giving you access to several improvements of the station. Those can give you immense profits - additional Research Data, crafting materials, increased experience gain or the amount of Credits your Strike Teams can acquire. And let's not forget about the possibility to increase the inventory space of the main character or the amount of Consumables you can use in combat.

Each Cryo Pod point allows you to open a single one of them to gain a specific bonus. How can you get those Cryo Pods and unlock the improvements you're mostly interested in? You have to increase the Andromeda viability (more on that can be found in a separate chapter). In order to do so, you can:

The amount of points required to acquire a new Cryo Pod can be checked by going into the menu screen (where you can find, for instance, Skills and Inventory tabs) - the information you're looking for can be found in the upper right corner of the screen. In the same window, on the left side, you will find information about the amount of Cryo Pods available to open.