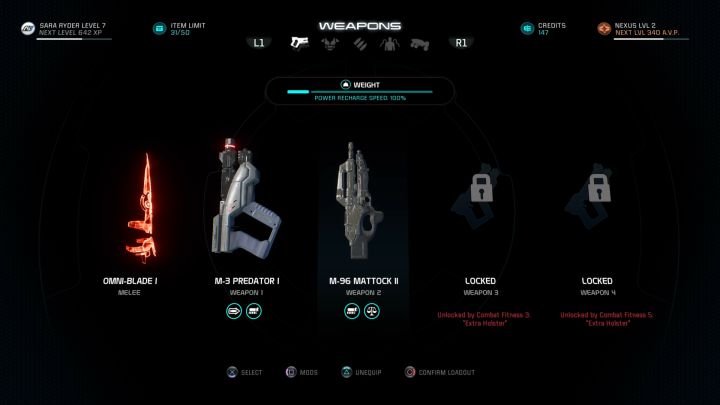 Weight is a quite specific factor in Mass Effect: Andromeda. Contrary to other RPGs, it doesn't influence the amount of items the protagonist can carry (max encumbrance) or weapon proficiency. In this game, it impacts a completely different parameter, namely cooldowns of the protagonist's powers.

Every weapon our character can carry has a certain weight. Naturally, pistols and melee weapons are lighter than, say, sniper or assault rifles. The total weight of all weapons carried by the protagonist influences cooldowns of all abilities. By default, this value is 100% if the weight of equipped items is balanced. The heavier the items, the more this value drops.

What does it mean? Let's assume that an ability by default cools down in 10 seconds. With optimal item weight and a cooldown speed of 100%, we have to wait 10 seconds before we can use the ability again. Should the protagonist be overburdened, the cooldown is significantly extended - with -50%, it's 15 seconds, with -100%, it's 20 seconds, and so on. As you might guess, weight has a gigantic impact on combat performance of classes that focus on using powers rather than firearms.

Several things about item weight that are good to know: