How to Unlock: Read an email from Doctor Aridana.

This section contains a walkthrough for The Firefighters, one of Heleus assignments found in Mass Effect: Andromeda. The quest involves identifying and stopping a group of hackers, who are responsible for the attacks on Nexus A.I. Your job will involve stopping a live attempt, as well as finding a way to get through to the group. 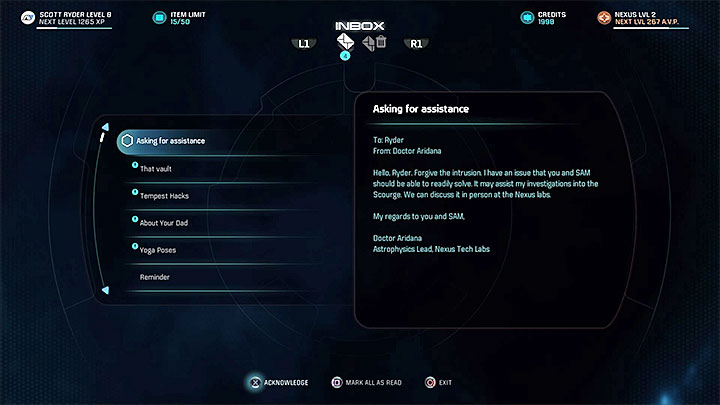 Wait for an e-mail from Doctor Aridana

Your duties as a Pathfinder will also involve a number of assignments that take place in the mother base. Soon after the A Better Beginning, you'll be enlisted by Doctor Aridana to help her with her investigation into the Scourge and the attacks on Nexus' A.I. Return to the Tempest and check your inbox to find the email.

Make your way to Nexus and proceed to Nexus: Docking Bay. Visit the laboratory on the first floor (the part that was unlocked thanks to the colonization of Eos) to find Doctor Aridana. You'll learn more about her research that will enable SAM to perform more complicated calculations.

Visit the SAM mainframe to begin the upgrade

Use the tram to reach Nexus: Habitation Quarters and enter the mainframe to initiate the upgrade. Unexpectedly, SAM will be attacked by a virus - to help the A.I., reset the three panels found in the room in the right succession (which can be seen on the screenshot above). Once you've managed to restart the system, talk with SAM about the virus.

Return to Doctor Aridana and accuse her of an attempt to sabotage SAM. She, as well as other researchers, will tell you about the problems Nexus has with AI-disrupting viruses. 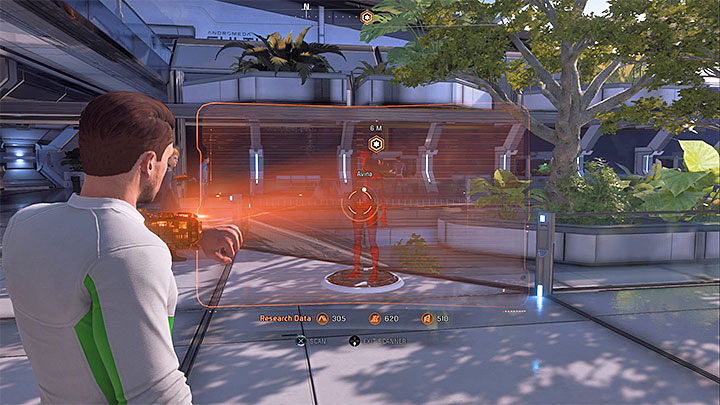 Get to the bottom level of Nexus: Docking Bay. Using the scanner will enable you to identify an infected object - VI Avina. Initiate a conversation to get through to one of the hackers. Use the opportunity to trick your interlocutor, who will be utterly convinced of the success of the operation.

Wait for an e-mail from Knight 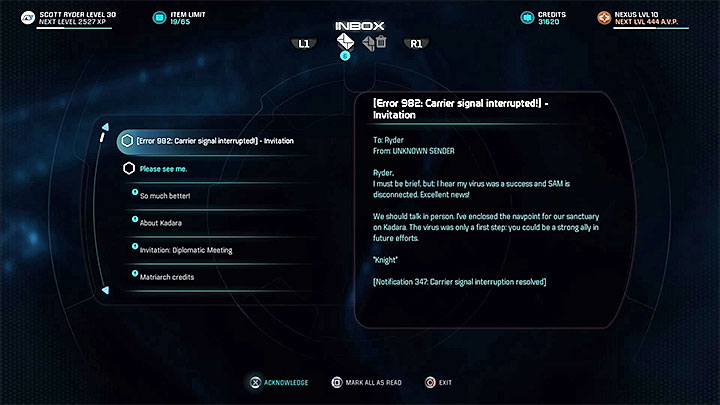 An e-mail from Knight

The next step involves staging a meeting with the leader of the hackers. However, you'll need to wait for an e-mail from the hackers regarding the possibility of a meeting.

The mail will find its way to your inbox once you've managed to land on Kadara, an event which is a part of Hunting the Archon, one of the storyline quests found in game. Return to the Tempest and read the e-mail from Knight. The message will contain an invitation to visit the hackers' hideout.

Go to the hackers' sanctuary on Kadara 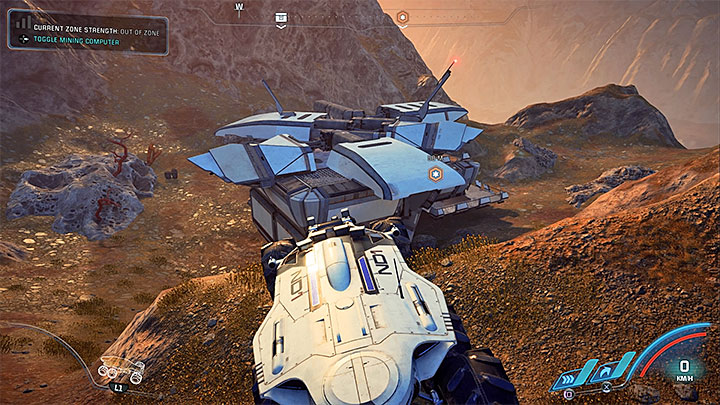 Land on Kadara and start exploring the wastelands. The Hackers' sanctuary is located in the central part of the planet (you can see the location marker on your map). Try to approach it from the north (which requires a quite demanding off-road ride). Your destination is shown on the screenshot above. Once you've reached the hackers' hideout, use the main entrance and talk to Knight. Unfortunately, you won't be able to learn more about her plans, but you may ask a few additional questions.

You can now proceed in two different ways. The first variant is less subtle, but it is much less time-consuming. The second one is a non-lethal solution involving an in-house errand.

Variant 1 -Scanning the area for evidence 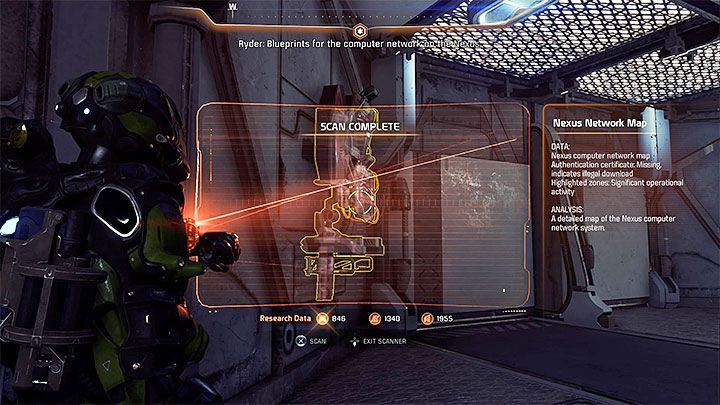 Kill the hackers, then scan three interactive objects found in their hideout

This variant sees you use your scanner to find the evidence on your own. Start scanning the area despite SAM's warnings. During one of your tries, the hackers from the building will turn against you, forcing the party to defeat them in combat. Clear the area, then scan all of the terminals containing the blueprints of the EMP charge and Nexus computer network. 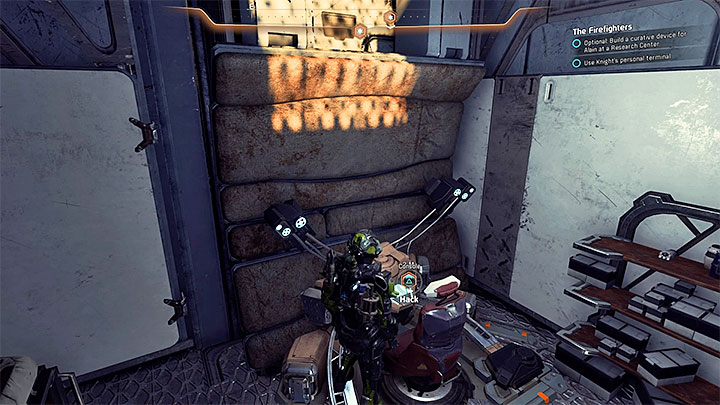 You can now proceed to Knight's personal terminal and hack it. You'll learn that she is planning to destroy all quantum computers on Nexus. 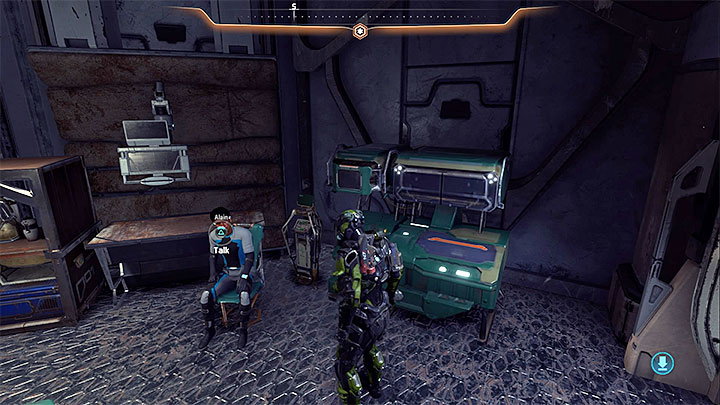 To complete the quest in a more peaceful way, find all of the interactive objects in the hackers' hideout without using the scanner. Use the opportunity to talk to Laveria and read a few datapads. However, your main goal is to talk to Alain (Knight's son) who can be found in a room on the ground floor of the building. The man will enlist you to help him repair his spinal implants. 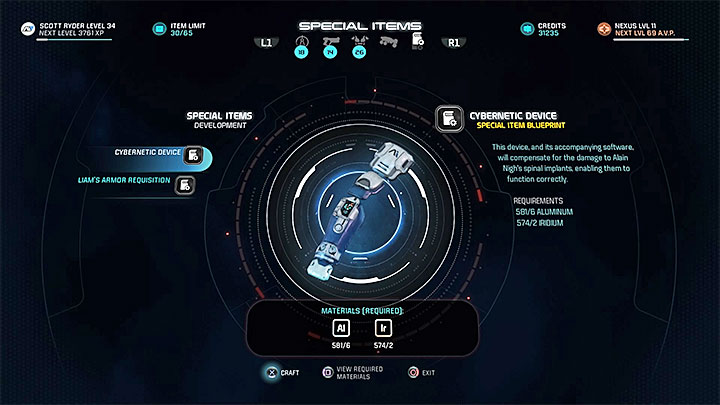 To fulfil Alain's wishes, you'll need to return to one of the crafting tables, e.g. the one found in Kadara's docks or on the Tempest. Once you've activated the interface, enter the special items tab and choose the Cybernetic Device (shown on the screenshot) - the item requires 6 units of aluminum and 2 iridium, which are one of the most common resources in the world. 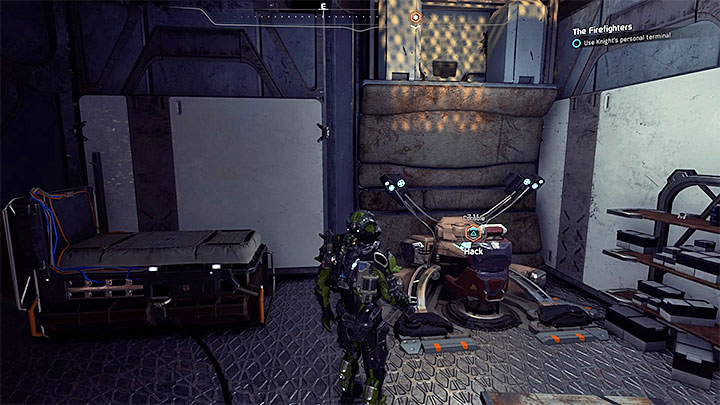 Even with Alain's help, you still have to hack the terminal

Return to the hackers' hideout and deliver the device to Alain. Ask him about Knight's plans, and you'll learn that her project has a codename: Mercury. You can use this information to hack her personal terminal. The terminal contains distressing data - Knight plans to destroy all of the quantum computers on Nexus. 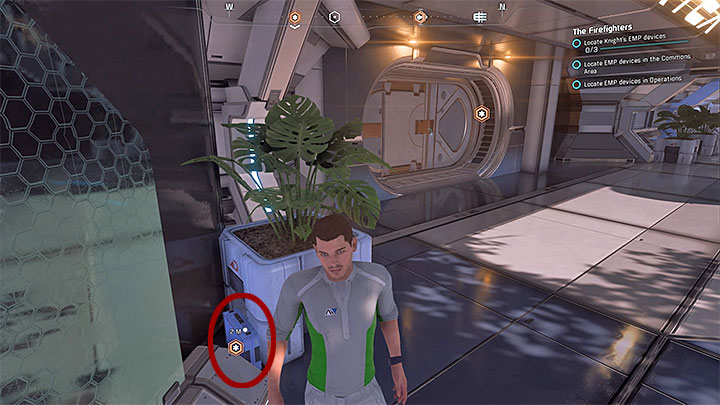 Go back on Nexus. The EMP devices can be accessed in any order but the best way to do it is to start from the Common Area because it's a part of the "starting" location, Nexus: Docking Bay. The EMP device can be found hidden behind the plant near the entrance to Vortex club, this place is presented in the picture. 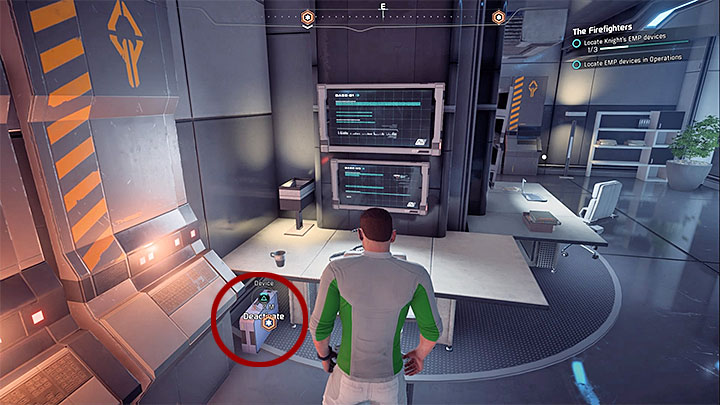 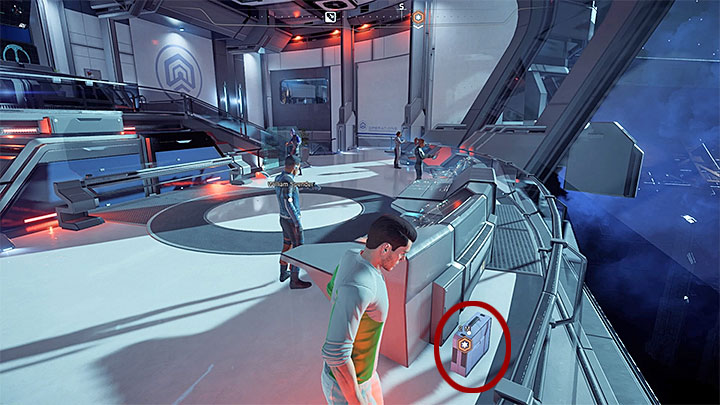 The second and the third charge can be found in Nexus: Operations Center. The second device is hidden under the desk in the monitoring room (picture 1), the third device is behind a row of computers on the highest level of the location (picture 2). 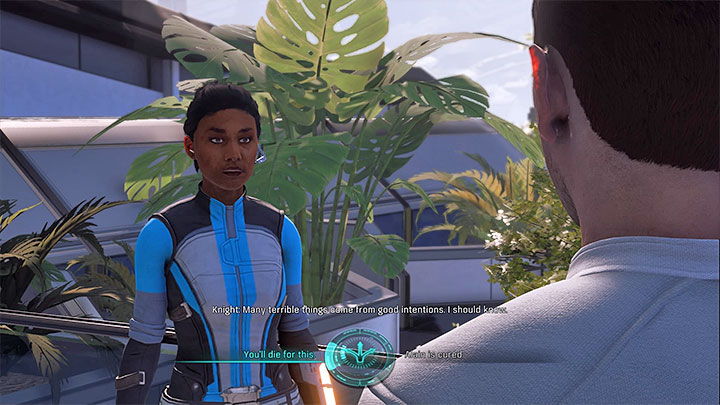 You may have to make a decision

You can now go back to Nexus: Docking Bay. Knight is on the highest level of the Common Area, you must speak with her. During this conversation you may have to make a decision. If you didn't complete the optional goals for this quest or if you choose the left dialog option then Knight will get shot. If you completed the optional goal connected with the cybernetic device for Alain then you can choose the right dialog option and convince Knight that SAM has cured her son. In this case the quest won't end with her dying and you also receive the last device from her.