Here you can find the Additional Tasks that can be unlocked in Mass Effect: Andromeda game during your stay on Eos. They are mostly minor quests but by completing them you can receive XP and other rewards. Not all quests from this list are available from the beginning. Some of them are available when you reach a certain point in the story or after completing the terraforming process.

How to unlock: Use the terminal after activating the relay station [Eos: Site 1]. 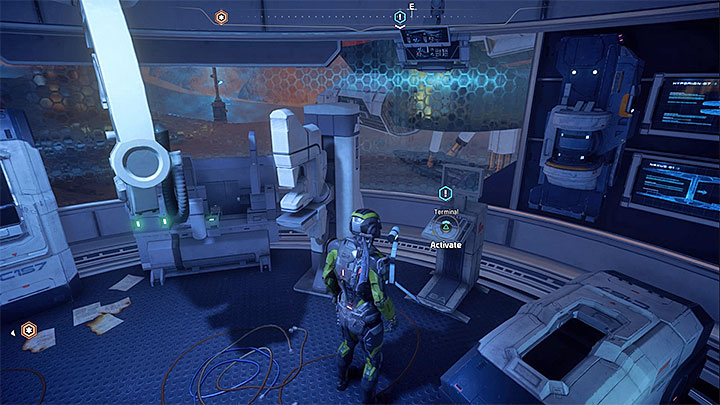 The terminal that you must use

This quest can be easily completed during A Better Beginning main quest. In the first part of that main quest you must activate relay station in Site 1 base. When you do that, search for a small building to which you can enter. Inside, use the terminal to activate power relay.

You receive a quest in which you must collect the local minerals and create a weapon. To do that, interact with terminal in research center and create any weapon. As for the minerals, you may already have them from your previous visit on Habitat 7. Otherwise, look for the minerals in Site 1 or wait until you can travel freely on Eos.

Rewards for finishing the quest: XP, access to research center on Eos.

The Ghost of Promise

How to unlock: Find the datapad with notes near one of the barrels stations. 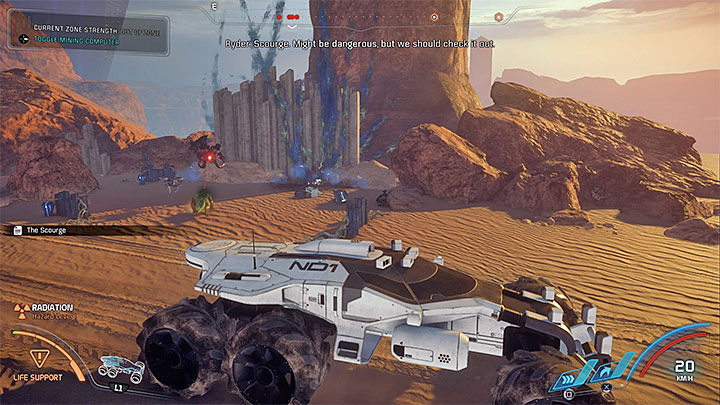 This quest can be unlocked during your travel on Eos and finding the station of scientist Ana Carrell, one of the first settlers on Eos. After eliminating the enemies (probably Remnants bots) you can investigate the location, scan the interactive objects inside and take the datapad. From now on you can look for other stations and get new datapads (SAM will inform you when you get close to a new station).

How to unlock: Find one of the Remnant cores. 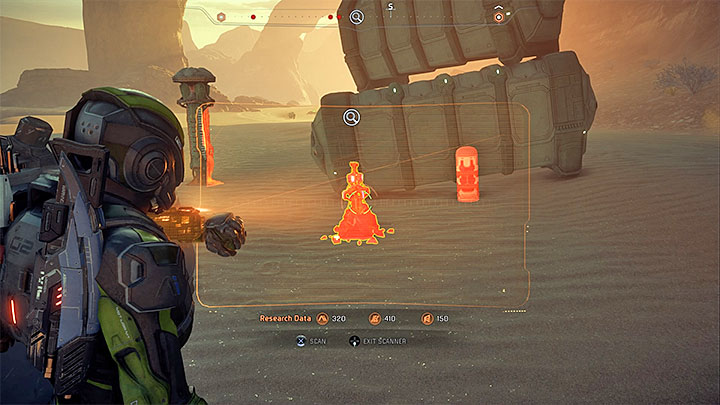 This quest can be unlocked during your travel on Eos and finding and scanning one of the Remnant cores. From now on you can look for other cores (they are in places of kett activities). Each time when you are close to a place where a core is you will receive an information from SAM.

How to unlock: Find and scan colonist's corpse. 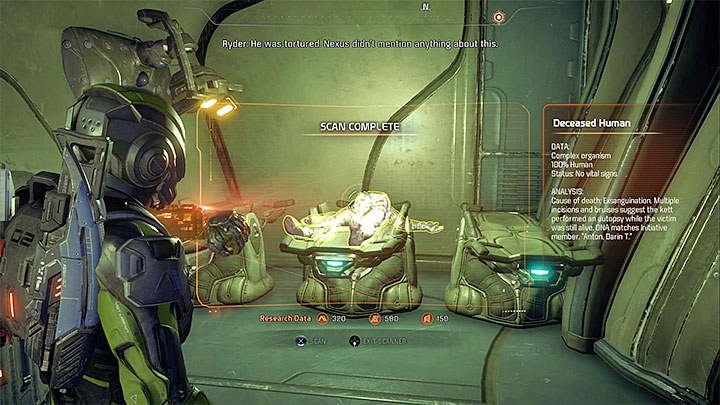 Search for dead colonists, you can scan their corpses

This quest can be unlocked during your travel on Eos. Find and scan corpses of one of the murdered colonists. From now on you can look for other dead colonists and scan their corpses. You can find datapads near them.

Waking Up to the Future

How to unlock: Find a message in one of the terminals on [Eos]. 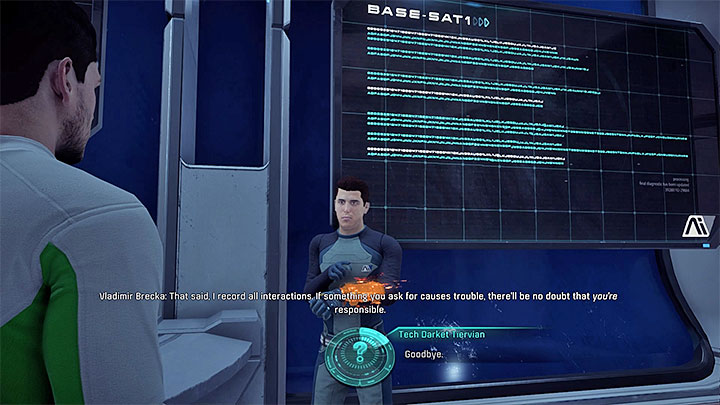 Vladimir is in charge of the cryo pods

This assignment can be unlocked once you've completed the initial stage of colonizing Eos (A Better Beginning). Enter the Eos outpost and find a terminal with a saved message. Reading it will add the quest to your journal.

The task involves conforming to the wishes of Darket Tiervian, a female Turian who wants to leave the Cryo Bay earlier. To humor her wish, return to Nexus and meet up with Vladimir Brecka in the Operations Center. Talk to him about waking up a person, and point him to the Turian. 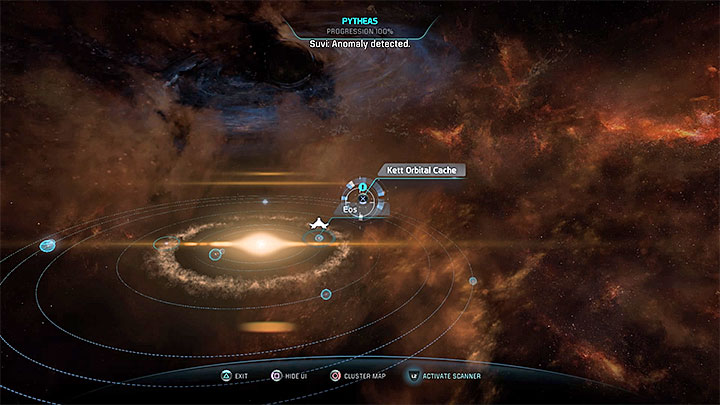 Return to the outpost on Eos. Find Darket Tiervian who is already on her feet. As a reward, the Turian will tell you where to find two Kett stashes in the Pytheas cluster. Return to the Tempest, use the cluster map to access the Pytheas Cluster and locate two anomalies that hide the sought stashes. Each cache will give you additional resources.

How to unlock: Speak with Jacob Mittney [Eos]. 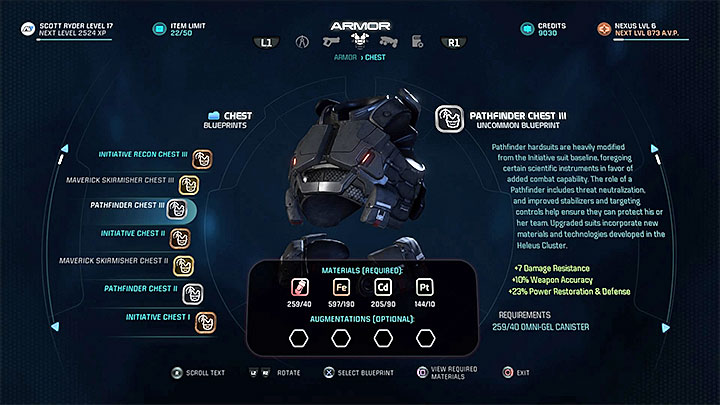 This quest can be unlocked after establishing the outpost on Eos AND after the improvement of the living conditions on the planet (the radiation disappears). When you meet those requirements, find Jacob Mittney in the outpost. From him you will learn about crafting the titular Pathfinder Armor. Use the crafting terminal (e.g. the one in the outpost or on Tempest). Find Pathfinder armor and craft any version (I - V). You can do it only if you have the right materials but if you don't have them, you can find them on Eos or buy from a merchant.

How to unlock: Read the message in the terminal [Eos]. 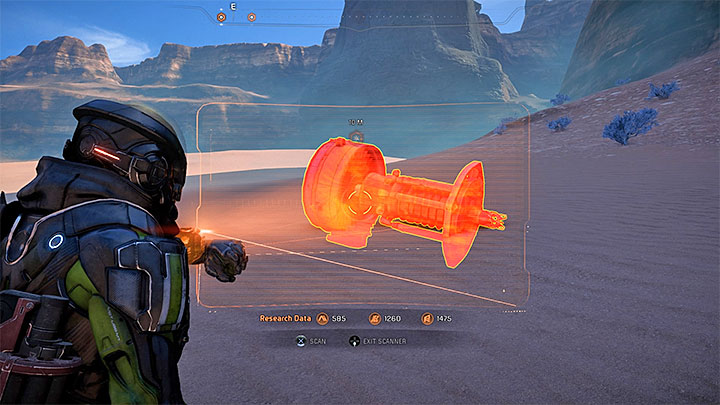 This quest can be unlocked after establishing the outpost on Eos AND after the improvement of the living conditions on the planet (the radiation disappears). When you meet those requirements, find inside the outpost a terminal with the message regarding drones. Your task is to find six drones and place transmitters near them. The drones can be reached in any order and each one of them is visible on Eos map. After locating each drone, scan it and interact with it to place the transmitter.

How to unlock: Read the message in the terminal [Eos]. 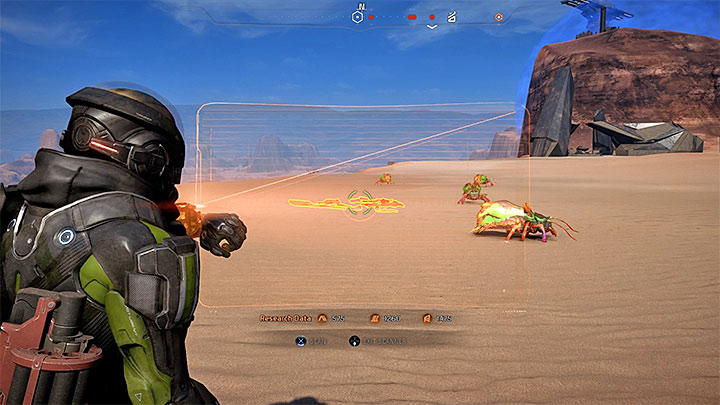 This quest can be unlock after establishing the outpost on Eos AND after the improvement of the living conditions on the planet (the radiation disappears). When you meet those requirements, find inside the outpost a terminal with the message regarding the problems with supplies caused by local pests. When you get to a supply point (they are marked on the planet's map) you can eliminate the Shemrys creatures and scan destroyed cargo. Then you can inform about that by going back to the terminal and giving your report. This allows you to prematurely end this quest.

Alternatively, you can ignore the report and continue investigating the points marked on the map. This allows you to expose the local smugglers that stand behind the commotion. Speak with Chase Gagnon and return to the terminal to give a full report.