How to unlock: Establish the first outpost during the main quest A Better Beginning [Eos].

Here you can find the guide for AVP Cryo Deployment Perks quest. It is a short Priority Ops (main storyline quest) in Mass Effect: Andromeda game which serves as an extensive tutorial. This quest allows you to learn how to develop Nexus by using Cryo Pod Points . 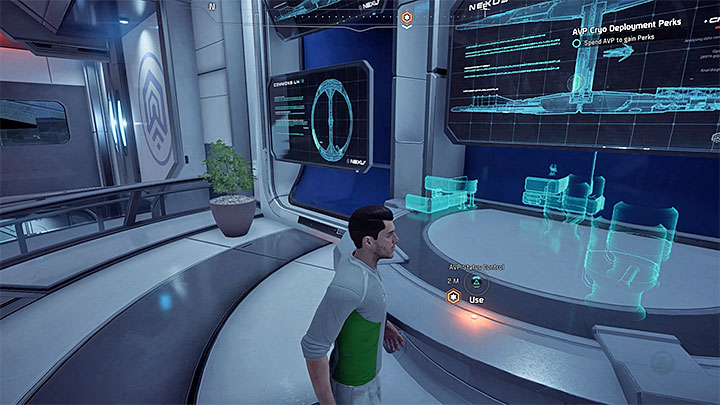 Use the AVP console and spend your first Cryo Pod Point

This quest is unlocked automatically after you establish your first outpost (scientific or military) on planet Eos. The goal of this quest is to learn about the Andromeda Viability Points as well as getting the Cryo Pod Points that you get from AVP and can be spend on developing Nexus.

Return to Nexus and go to Nexus: Operations Center. There, you must speak with Addison and with her assistant Vladimir Breck. Ask Vladimir about everything and use the AVP console for the first time. You can spend your first Cryo Pod Point on one of the seventeen options.

Warning - the gameplay mechanic of Nexus development is described in the separate chapter of this guide. There, you can find tips for choosing the best options when it comes to developing Nexus. Each time you want to spend another Cryo Pod Point or claim the item rewards which are generated in regular intervals of time, return to Nexus, or (a better idea) interact with the terminal found on the Tempest's middle deck.

Rewards for finishing the quest: XP, unlocked the option to develop Nexus.