Here you can find the guide for Nexus Reunion quest. It is a short and not very complicated Priority Op (main storyline quest) in Mass Effect: Andromeda game. In this quest you must visit the titular Nexus which serves as an operation base for Andromeda Initiative teams. This quest requires you to have only a few conversations but in Nexus you can also unlock your first side quests.

Warning - Initially, Nexus may seem like a small location but it "grows" with your progress - new areas with new NPCs and attractions are unlocked in the existing locations. In addition, the tram will be able to transport the team to completely new fragments of Nexus.

After your character regains consciousness listen to the conversation. When you are in Nexus: Habitation Quarters location go to the place where you can use the tram. Use it to get to the new part of the hub.

Speak with the worker 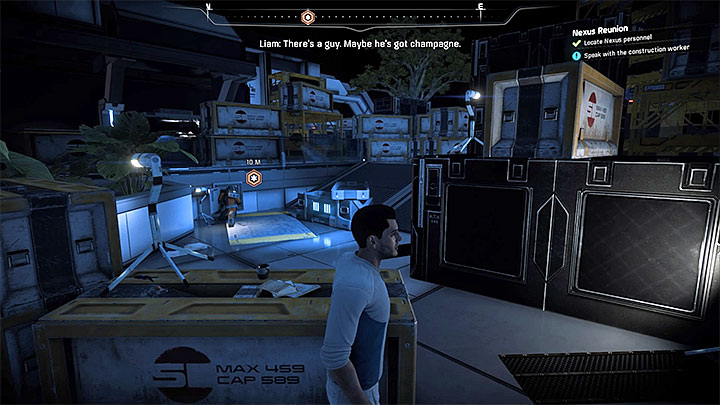 Find the worker in the empty Nexus warehouse

When you are in the new area approach the hologram (Avina) and speak about every topic to get the basic information about Nexus. Here, you can also find containers and objects that you can scan.

Investigate the area and find the worker - speak with him. A turian called Tiran Kandros will join the conversation.

Go to the Nexus' Operations Center with Kandros

Go with Kandros to the tram. By using it you are transported to Nexus: Operations Center location. You will automatically meet with Addison, Kesh and director Tann. This also unlocks a small quest called Task: Getting to Know the Nexus.

You can now look around the newly unlocked Operations Center (chances for exploration, adding new side quests to your journal, trading) or you can immediately go to director Tann's office. This unlocks new main quest called A Better Beginning.