Here you can find the guide for Planetside quest. This is the second Priority Op (main storyline quest) in Mass Effect: Andromeda game and you unlock it after finishing the prologue on Ark Hyperion. This quest is about the exploration of planet Habitat 7. The quest is rather unusual because here you can act freely. Besides fulfilling the main goals you can also explore the planet and complete side objectives.

Here is some important information about this quest:

Find the rest of the Pathfinder team

Begin the exploration of Habitat 7. On your way you can test the pistol on the damaged fuel cell. Later, you must learn how to use sprint (dodging beams) and Jump Jets (getting to new ledges and platforms). 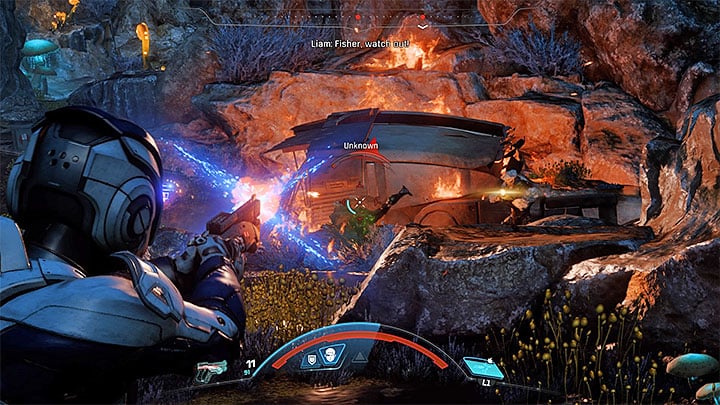 The aliens should be attacked one by one. Also, use covers during combat

When you get to Fisher you will have to face aliens for the first time. During this fight (and every other fight in the game) you should use covers, be on the move when you are under fire, observe your enemies and use your unlocked abilities.

After the fight (you get XP) speak with Fisher. Additionally, scan the corpses of one of the defeated aliens (Research Data) and look around for interactive containers. 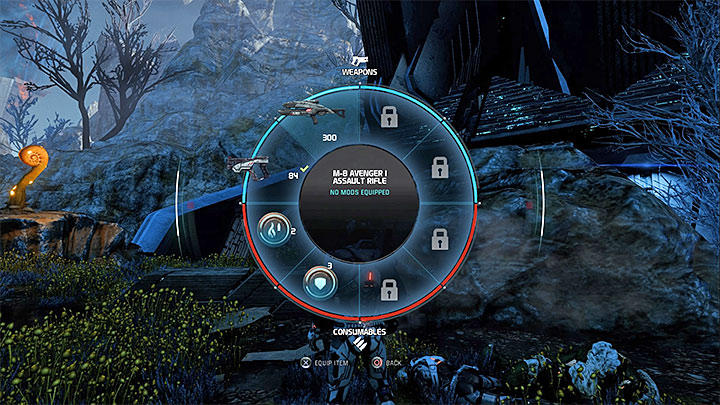 You can get a good assault rifle

Kirkland can be found in the north, near the place where Fisher was. Here, you must also attack groups of aliens. After victory (XP) check Kirkland's status (he might be shot by the enemy). By doing that you receive assault rifle (M-8 Avenger I) which can be very useful in upcoming battles. 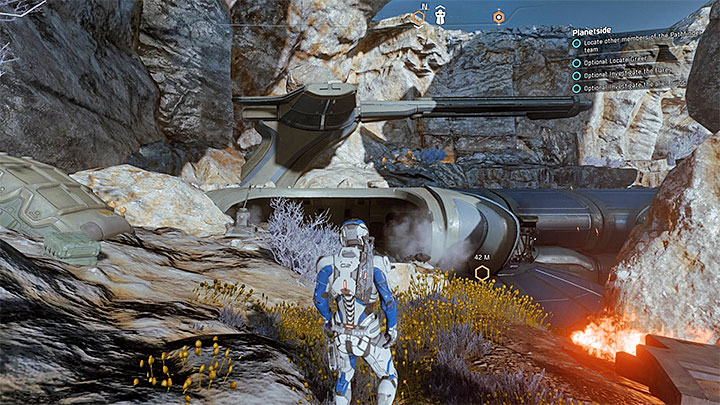 The ruins that can be investigated

Alien ruins are in the east edge of the map. They are marked by a unique icon. You get this objective when you get closer to the ruins. Go inside. Look around the ruins and search for containers. Use your scanner on one of them. Interact with the device to get the electricity back.

Continue the exploration of the ruins and enter the room that was previously locked. The team will be attacked by a hostile machine. Defeat it and scan it (Remnant Research Data). You can now leave the ruins. Stay cautious, the team can be attacked by aliens. 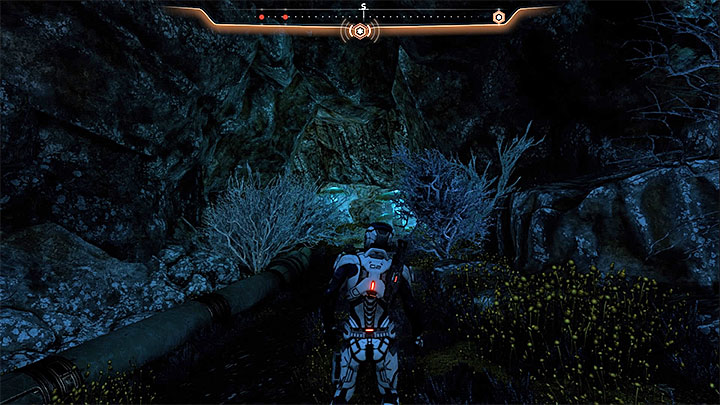 This objective is unlocked when you get closer to the center of the map. Greer is hiding in a cave; the entrance is presented on the picture above. Eliminate the aliens and receive Greer's thanks.

Warning - When you are in the cave you must avoid areas with an increased radiation level because you can receive unwanted damage.

The alien ship is in the east part of the map. When you get closer to it you must eliminate a group of enemies. After the battle you can scan the ship (Research Data) and check the containers. 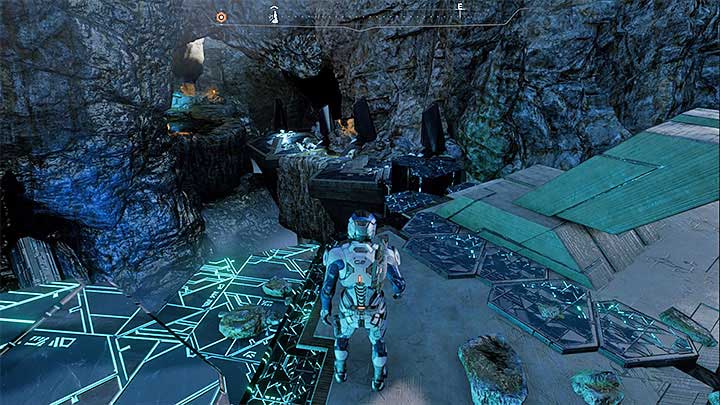 One of the paths requires jumping on small platforms

The cave is in the north-west part of the map. This objective is unlocked when you get closer to it. You can access the cave from various sides, e.g. from south (jumping on stone blocks that are above abyss). In the cave you can find and scan a tree and unknown life form (Research Data).

Optional: Investigate the place from where the flares were shot

You can see the flares during your exploration of the central part of the map. Get closer to the north part of the map to get the contact with Cora and complete this objective. 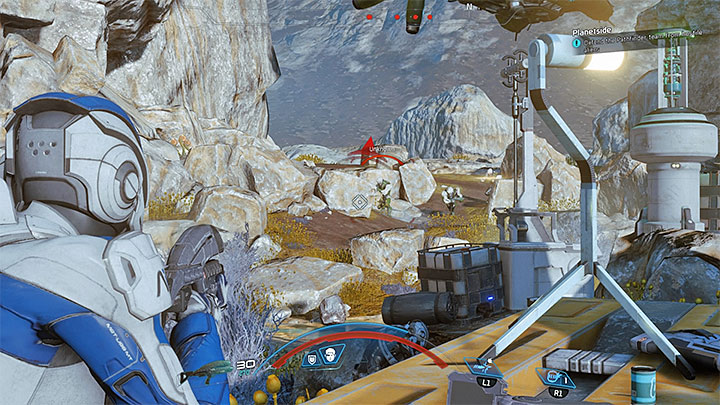 You must get to the north part of the map. The easiest way to get there is to go through the west part, near the alien ruins. When you get to your destination you notice that your team mates are attacked by numerous groups of aliens. Help them and defeat the enemies (XP).

After the battle you can go to the supplies. You can refill your ammo and take the pistol (Charger I) (you can set it as your alternate weapon only after getting to one of the hubs where you can change your loadout). The second group of aliens will appear in the area. This means that you have to fight them. During this battle you must look out for the stronger alien that is protected by a shield - check if you have the ability that allows you to destroy shields more efficiently.

After the battle (XP) listen to the new conversations and move to alien construction located in the north-west part of the map. There, you will face new enemies. Next, use the passage between the rocks to get to the bigger facility where you will watch a cut-scene. 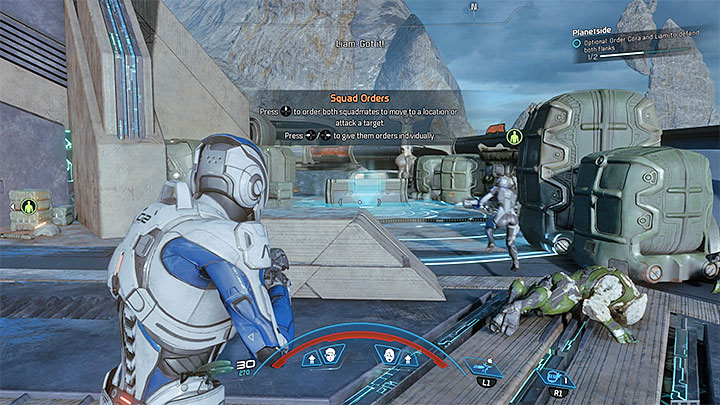 Order your teammates to defend the flanks

Follow the Pathfinder and eliminate every new alien on your way. When you get to the headquarters you must protect the Pathfinder. As the game suggests, you should order each of your teammates (Cora and Liam) to defend one of the paths that leads to the place where the Pathfinder is.

When the fight begins try to help the team member that is currently under a heavier fire. If necessary, be ready to quickly revive that team mate. Use your abilities and if you run out of ammo you can quickly return to the supplies. In the later part there will be new elite enemies with shields. Don't try to kill them at all cost because the Pathfinder should finish the encrypting process before the enemies get closer to your team.

Wait for this mission objective. Stop attacking the enemies and run to the marked door and help the Pathfinder to open them. You must watch a long cut-scene which completes the quest and unlocks a new one - Nexus Reunion.