You'll get this assignment after entering Kaspian system. On the galaxy map you'll see freighter MSV Cornucopia. Its crew won't answer, so it's good to check what happened.

Inside you'll have to fight few groups of zombies in the cargo. At first, your radar won't detect them, so don't be surprised.

After the fight head to the cockpit to read information in the computer. You'll learn about the fate of the crew. Then come back to Normandy.

Colony of the dead [Investigate samples]

You'll get this assignment after hacking into terminal in ExoGeni facility on Feros (6.3.4. Investigate samples).

Outside and inside them you'll find a group of zombies. After eliminating them go to the other structure and repeat the same.

Science facility is guarded, but you won't have much problem with getting rid of the "security". Inside go to the room on the south west and read the information about the crew from the terminal. Then come back to Normandy.

You'll get this assignment after hacking the terminal on the west side of upper level of ExoGeni facility on Feros.

After landing on Nodacrux head to the science facility (Nodacux - 4). Before entering it though, you'll have to eliminate Thorian creepers outside and inside it. Fight them using the same tactic as with zombies: don't let them come too close and use area attacks.

In the southeast room you'll meet few ExoGeni scientists. During the conversation you'll learn why there were Thorian creepers on Nodacrux. Doctor Ross will want to bribe you so you let them free and keep the secret. Whether to agree, or to kill them - it's your call. The first solution won't give you any morality points. 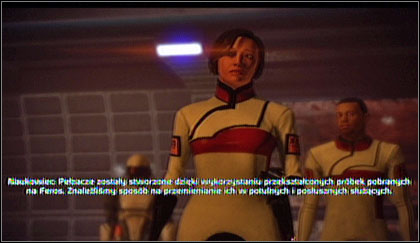