This system unlocks after getting assignment 3.19. Doctor Michel.

If you talk with Garrus many times on Normandy, after completing two of three main plot missions (5. Therum, 6. Feros, 7. Noveria), he will tell you about a cruel scientist who escaped the justice. If you agree to help your companion, he'll tell you where you can find him.

The deck of MSV Fedele will be filled with zombies, so keep your distance (it's good to use biotics and grenades). After the fight enter the room on the south. Doctor Saleon will be there. 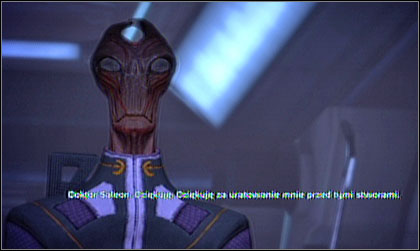 Regardless of the conversation, you'll have to fight him. He won't pose any threat to you. After killing him talk with Garrus and then return to Normandy.

You'll get this assignment by hacking into terminal on Noveria (7.1.4). After entering Newton system, admiral Hackett will contact you and tell about a doctor who is apparently now in danger because his connection to a certain organization has come to light.

After landing on Ontarom head to the underground facility (Ontarom - 3). Eliminate its guards from the distance and enter inside. Here you'll have to fight as well.

After eliminating the enemies enter the room on the west of the station. There you'll find a soldier threatening to kill the doctor you were looking for.

Hint! If your hero was on Akuze (Sole Survivor background), he'll be recognized. It won't affect much the conversation though.

The fastest way to convince the soldier to put down the gun is to use charm/intimidation. If you want the scientist dead you can encourage the soldier to shoot him or offer to do it yourself. If the soldier kill his hostage, a moment after he will kill himself. If you do it, he'll survive.