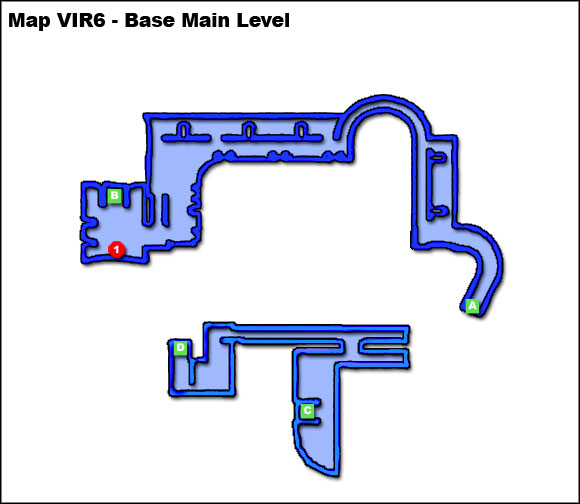 A. To the Labs

D. To the Communication Tower 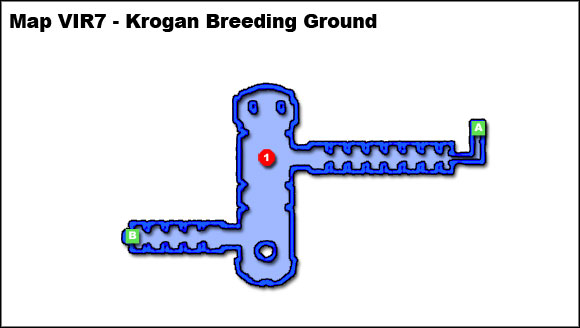 You can enter the base in two ways. First (VIR2-A) will allow you to get to the security control and complete assignment 9.2.1. Assisting Kirrahe's Team. Your road will be longer, but you'll be able to gain some experience and morality points. Going through the other entrance (VIR2-B) will let you to avoid some encounters and get into the labs. I propose to choose the first option to get more points.

After getting inside, you'll see the security control. Use it to support Kirrahe unit (9.2.1. Assisting Kirrahe's Team) and unlock the door leading further into the base. 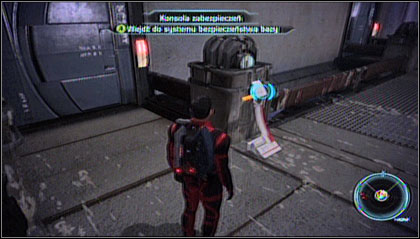 In the main room you'll need to fight geths and indoctrinated salarians. Then head to the security room. There you'll encounter more salarians.

I propose to choose the way leading to the detainment level (VIR3-B) first. In one of the cells you'll see a salarian with whom you'll be able to talk. He will tell you about the indoctrination. If you want to gain some paragon points, let him out, if you play as renegade, leave him there. This same goes for the other prisoners.

Come back this same way and get through another passageway (VIR3-D) to reach the labs with more cells. One of salarians will also ask you to free him. Notice though, that this way you'll let already indoctrinated prisoners out as well. Your companions will object. If you agree to let them out, you'll gain paragon points but you'll have to fight them. They won't be very dangerous.

Hint! Second exit from the room (VIR5-C) will lead you to the passageway which you would use if you chose alternative way to enter the base.

Come back the same way you got here and use the elevator (VIR3-C). It will take you to the labs main level. Here you'll need to fight a krogan, group of zombie and asari.

After leaving the room, you'll find yourself on a bridge. Geths lifted it and you'll must lower it again to pass through. Go back and search for a switch.

Go south and enter the security office. You'll meet Rana Thanoptis there. She will ask you to spare her and offer that she'll open the door to Saren's private lab. She'll tell you also about indoctrination and Sovereign. If you kill her, you'll gain many renegade points. Saving her won't bring you any paragon points though.

Use the elevator activated by Rana (VIR5-D). You'll reach the communications tower. You'll find prothean beacon there. Activate it using nearby terminal. This will give you another vision.

Then go upstairs to the communication panel. You will have a conversation with rather unexpected guest who will make you see some things from different perspective. When the conversation will be over, the interface will explode. 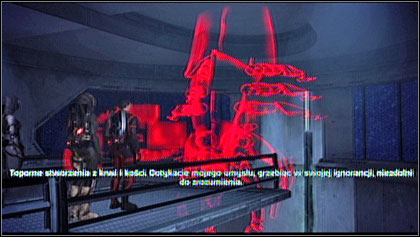 A moment later Joker will contact you and ask you to hurry. It will be just about time to complete your task - deactivate anti-aircraft turret.

Go back to the labs and run toward the lifted bridge. It will lower so you can pass through. You'll need to fight many geths and krogan along the way.

Fight your way through the base main level. You'll need to reach the turret control (VIR6-1) and use it to let Normandy land.

After deactivating the turret, you'll be attacked by two groups of geth. Get rid of them and use nearby elevator (VIR6-B) to get to the krogan breeding ground. The place where you need to set up the bomb (VIR7-1) will be near. Before you'll reach it, you'll have to fight some geths.

About that time captain Kirrahe group will manage to deactivate the second turret. Normandy will land and deliver its special cargo.

Unfortunately geths will be so numerous that getting to Kirrahe will be slightly impossible. You need to relieve them.

Hint! At this point you'll have to choose your companions. Ashley and Kaidan will be busy (one is with Kirrahe, the other will stay to set up the bomb). It's important to complete well balanced and equipped quad.

Go through the west gate and head to the elevator which will take you to the base main level (VIR7-B). Before you'll reach it, you'll need to get rid of some geths and krogans. After clearing the area ride down. 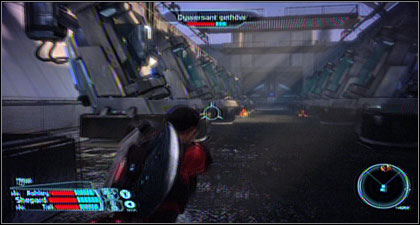 On your way to the second turret (VIR6-D) you'll see a transporter with geths. You won't be able to save the unit in tower and some back to the bomb on time.

Hint! You will face a difficult choice. Ashley's and Kaidan's lives will depend on you. Only one of them can leave Virmire. It's your call. After making the choice, you'll have to comment it to gain some paragon/renegade points.

Regardless of your choice, you'll encounter many geths. Among them will be prime, the strongest type of geth soldiers. Concentrate on him first during the fight for he will be very dangerous for your squad.

Then Saren himself will arrive. Talk with him to learn about his motives and (optionally) try to win him over to your side which won't be successful but will give you some morality points.

Eventually you'll have to fight him. First find a cover and change squad weapon to injury organic creatures. During the fight, use all of your talents: offensive and defensive. Control the state of shield and your squad's health and react if necessary (shield boost, medi-gel).

After the fight you'll see from the orbit big explosion which will completely destroy Saren's base.

On Normandy you'll meet your team. Liara will again try to get the information from Shepard's head. She'll manage to localize Saren's destination - planet Ilos (11).

During holoconference with the council tell what you learned about ex-spectre. Alas, they will be still ignoring reapers and Sovereign itself. 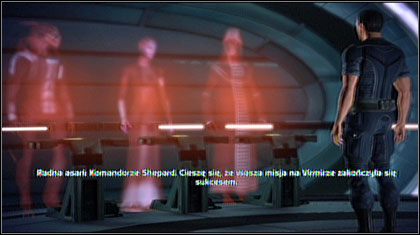 When you'll try to use the galaxy map, you'll receive the message to arrive at the Citadel immediately.

Hint 1! Before meeting the council, I suggest to complete assignments from chapter 13. Uncharted world. You won't be able to come back to Citadel and some of them require speaking with its residents.

Hint 2! If you helped captain Kirrahe unit (9.2.1. Assisting Kirrahe's Team), you'll be able to speak with him in Normandy engineering. You'll also meet a trader there so it's good to buy or/and sell some stuff. Remember, that after landing in Citadel captain and his men will leave the ship.