9.1. Road to the Salarian Camp 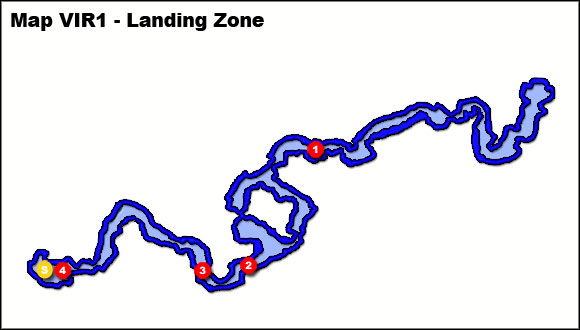 After landing, you'll need to get through terrains near Saren's base. You'll encounter many geths along the way. Luckily, you'll be in Mako most of the time. You'll need a squad with balanced abilities and skills, with weapon upgraded this way, it will have bonus against shields and synthetic enemies though.

Your first task is to get to the salarian camp (VIR1-4). You'll need to do one more thing along the way - turn off the anti-defense tower to let Normandy land. Switch will be in the second gatehouse (VIR1-2).

Near the landing place you'll encounter some drones - your first enemy, and then some more. Eliminate them from the distance.

Soon you'll reach first gatehouse. Use turret and cannon to get rid of geths guarding it. Then leave the vehicle and go up to eliminate the rest. Come back to Mako and get through the gate.

You'll notice a geth colossi - bigger version of armature. His shots are more dangerous, but slower, so you shouldn't have much problem with avoiding them. Once the machine will be down, you'll be able to choose one of two paths. Both lead in this same place, where another colossi with some armatures will be waiting for you. I suggest to pick the north path, so you can flank the geths which will be staying near the second post.

With the second gatehouse (VIR1-2) do the same as with the first. First use Mako to clear the area in front of the building. Then go upstairs and eliminate the rest. Use the switches to turn off the anti-defense turrets and open the gate. Then continue further. 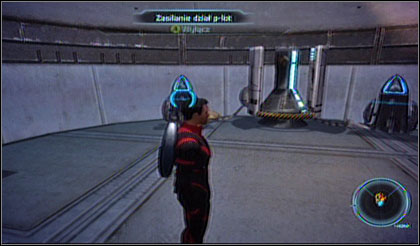 Before you'll reach salarian camp, you'll need to get through once more post. Use the same method as with the others.

Enter the camp and speak to captain Kirrahe, the leader of the salarian infiltration team. You'll learn about experiments performing in a base nearby. Wrex will be particularly upset about them. He will walk away from the camp. Before going further, you should speak with him (9.1.2. Wrex and the Genophage).

Hint! After dealing with Wrex, it's good to take the opportunity to buy some useful stuff (VIR1-S) before the mission.

When Wrex will find out what experiments are being performed at the Saren's base, he won't want to let you destroy it. He will walk away from the camp; your task will be to talk with him.

Hint! Be careful and choose your lines wisely. The conversation may end with Wrex death!

You'll need to convince krogan, that there's no other way. You can do it only when you completed assignment 13.1.1.1. Wrex: Family armor before. If not, you'll have to use charm/intimidation (at level eight or higher) to persuade him. 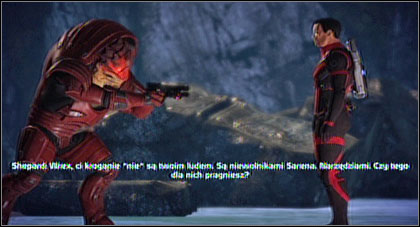 You can also shoot Wrex or tell Ashley to do it. Both way, you'll gain a lot of renegade points.

Other lines will lead to situation when your ally will kill Wrex from behind. At this moment, morality points bonus will depend on the tone in which you'll comment Wrex death. It won't be as big as if you manage to convince him though. 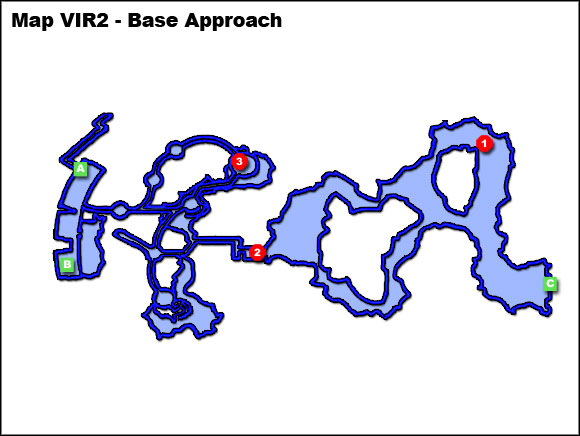 C. To the Landing Zone

When you'll be ready to continue further, captain Kirrahe will tell you about his plan of destroying the base. He and his men will attack from the front and your task will be to infiltrate it and deactivate anti-aircraft systems. It will let Normandy land there and provide the bomb to end Saren's activity on Virmire.

Hint! Before you go, Kirrahe will ask you to reinforce his unit with one of your companions. You can choose between Ashley and Kaidan. I propose to leave captain this person, who you didn't plan to take to the base anyway.

Now you can choose between going straight to the enemy territory (VIR2-A or VIR2-B) killing geths along the way and take a detour to support Kirrahe's unit by disrupting the base security systems (9.2.1. Assisting Kirrahe's Team).