7.3.1. Restoring the tram to Rift Station

In the garage you'll need to fight with a powerful juggernaut and some other geths. Destroy the repair probe first. It's also good to clear the nearby terrace so you won't be exposed to shooting from above. There will be a lot of exploding containers in the garage. You can use them to deal with the rest of enemies. 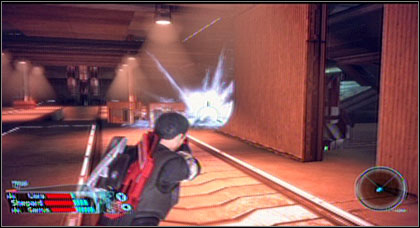 After the fight go upstairs and head to the elevator (NOV6-B). Before going up though, visit security room (NOV6-1) to take some useful equipment.

Meanwhile you'll hear message about systems breakdown. Your task is to restore them. You'll have also to eliminate some enemies, so prepare yourself and your companions before going up.

The geths will attack first, on the administration level near the cafeteria. Then you'll encounter more terrifying creatures, smaller and bigger ones alike. The first aren't too strong, but they act like kamikaze - run at you and explode releasing poison gas. It's best to eliminate them from the distance. The latter are more dangerous; you should avoid direct contact with them as well. 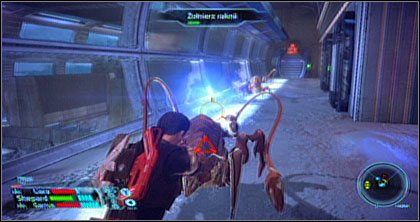 After the fight go south toward the elevator leading to Mira core (NOV7-B). You can search the rooms along the way to find some equipment, but watch out for the enemies, who jump off the sewers.

When you'll leave the elevator, you'll be attacked again by little, deadly opponents. Kill them and go to the main room (NOV8-2). You'll notice a terminal, but even after activation most of door will remain locked. You'll need to restart the system manually. 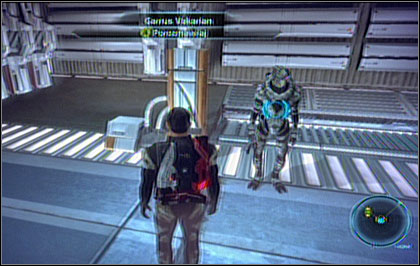 Go west to the memory core access (NOV8-1) - VI system controlling the station. Enter the elevator in the middle to descend into the core. Here, to restore the VI you can either spend 100 omni-gel, or solve the classic Tower of Hanoi puzzle. Either way, you'll be able to speak with Mira after that.

If you choose the latter possibility, you'll need to move each of the four blocks in the first column (labeled X) to another column (either Y or B), noting that only the top block in each column can be moved.

When you finish, the VI system will be restored and you will be able to restore the other systems. 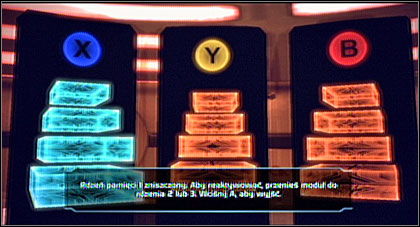 The puzzle is not difficult. There are lot of solutions. Here's one of them:

After restoring the systems, talk with Mira. If you tell her about your function, you'll gain access to most of information. You'll learn that Matriarch Benezia used the tram but it is now turned off. You'll need to reconnect the landlines and restore the communication (on the roof) to turn it on again.

Hint! While completing this task, you can be attacked by enemies in the main hall (NOV8-2). Be prepared.

Come back to the hall and go through the north door. Continue along the corridor to the elevator (NOV8-C) and ride down to the reactor.

There will be some geths waiting for you there, but eliminating them shouldn't be much problem. After clearing the area, repair the landlines (NOV9-1). 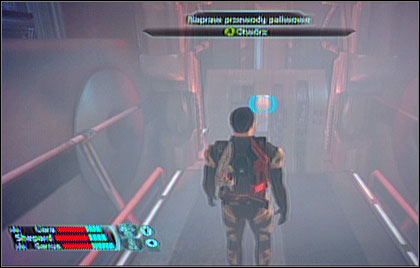 Explore the area searching for useful equipment and ride the elevator (NOV9-A) back to Mira core level.

Head west this time. Go through the door and ride the elevator (NOV8-B) to the roof. Kill the enemies using grenades and biotics (there will be a lot of them). Remember not to let them come closer to you and your companions.

After the fight, activate the fuel line controls (NOV10-2). This will turn on the tram. 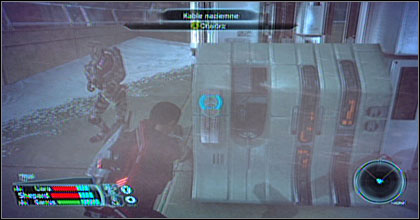 Come back to Mira core level and use south door to ride the elevator (NOV8-D) to the tram station.