Yet before landing it will become clear, that the authorities of the colony won't be favourably inclined toward you. As soon as you'll leave Normandy (it's good to take Liara) and head to the elevator (NOV1-B), you'll be stopped by the patrol commanded by Maeko Matsuo. Situation will become unpleasant but you can work it out using charm/intimidate.

Soon you'll be accosted by Gianna Parasini, the assistant to administrator of the port, Anoleis. She'll tell you about current situation on Noveria and about Matriarch Benezia, who went to the Peak 15 research facility. You won't be able to leave the port now though because of bad weather. To meet Benezia, you'll have to get a special pass. You need to speak with Anoleis about it. 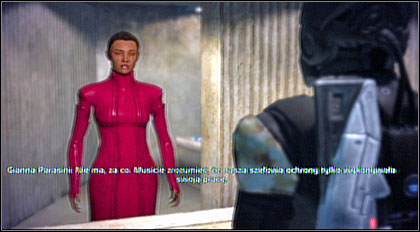 At this moment, you can come back to the docks to speak with Maeko Matsuo (NOV1-2) and gain some paragon/renegade points or use the elevator (NOV1- B) to get to the Port Hanshan market already.

Head to the Anoleis office (NOV2-1) in the south-western part of the plaza. You can talk with Gianna (NOV2-3) before entering inside to learn more about the situation. At the end of the conversation, ask for a permission to talk with Anoleis and enter his office.

He won't be very nice. It will become clear, that you will have to get the pass by yourself.

Hint! How you'll get the pass permitting to leave the port, it's your call. You can choose between three methods. One of them is connected with additional assignment (7.1.2) and two require dealing with Lorik Qui'in's case (7.1.1). First method is the fastest one but will give you least paragon/renegade points. The other require more time but will give you more morality and experience points. That's why I'll describe them in the first place. Those of you, who want to reach Peak 15 as soon as possible, should jump to the next paragraph.

After leaving Anoleis office, Gianna will accost you. She'll tell you that you can get the pass from Lorik Qui'in who can be found in the nearby bar NOV3-2). Use the elevator (NOV2-B) in front of the entrance to the docks to get there.

At the exit, you'll be accosted by Mallena Callis (NOV3-1). She'll ask you to help her with an industrial espionage (7.1.3). If you refuse, you won't have another opportunity to get this assignment - asari will be gone. 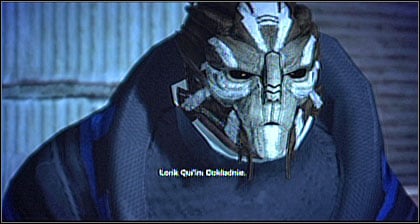 Find Lorik (NOV3-2) and speak with him. He'll tell you that that Anoleis has closed his Synthetic Insights office because Qui'in has evidence of the administrator's corruption. Anoleis has bribed the guards and they are in the office now searching for this evidence. Qui'in will offer you a deal: recover the evidence against Anoleis, and he will in turn provide you with the pass you need. He will also give you card to activate the elevator leading to corporate offices.

Before coming back to the main level, it's good to go up to the room with the Synthetics Insights security control unit (NOV3-4). If you manage to decrypt it, infiltration of the office will be easier. 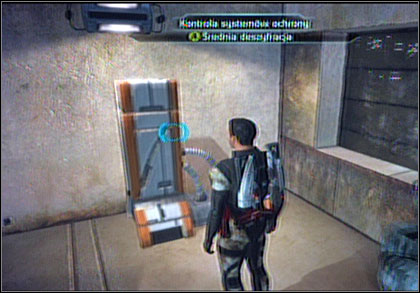 Go back to the plaza, enter the passage on the south-west side and get into the elevator (NOV2-A).

Right after leaving it, you'll encounter the guards hired by Anoleis. You can use charm/intimidation to convince them not to attack you and get some paragon/renegade points this way.

The rest of guards needs to be eliminated. Combine shooting, biotics and technics to kill them quickly.

Head to Lorik's office and copy the data from his computer (NOV4-1). Halfway back (NOV4-2) you'll be accosted by Kaira Stirling and some guards. You can't talk your way out of the fight. Find the nearest cover and concentrate on eliminating Kaira, since she's the toughest opponent. Then kill the others. 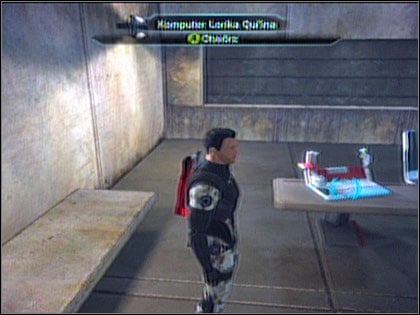 Hint! Before entering the elevator (NOV4-A), it's good to browse through the offices. You'll find some useful equipment, especially in the room on the north (you'll need to break the code locks).

After leaving the elevator, Gianna will invite you to join her for a drink and then quickly walk away. You'll find her in Mezzanine (NOV3-5). She'll tell you about her real identity and ask you to convince Lorik to testify against Anoleis. You can refuse, just give the data to Lorik (NOV3-2) and take the pass. You can also do something else to get some paragon/renegade points.

If you play as paragon, agree to Gianna's offer and use charm to convince Lorik (NOV3-2) to testify. Then head back to Gianna's office (NOV2-3) and inform her about it. 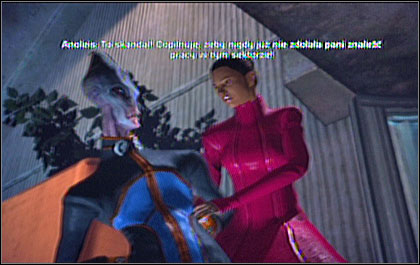 If you play as renegade, agree to her offer as well but use intimidation to convince Lorik. Then go to Anoleis (NOV2-1) and tell him about Gianna's real identity. Don't give him evidence from Lorik though. Watch the scene and then take the pass from ambassador's body.

Regardless of which method you chose to get the pass, head to the garage (NOV2-5). Show the pass to the guard (NOV2-4) before entering.

Before getting in Mako, you'll need to eliminate geths which are here as Benezia's freight. After the fight, you can also speak with Maeko or just get in Mako and leave. 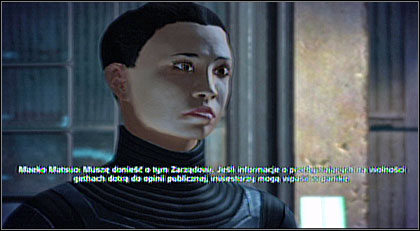