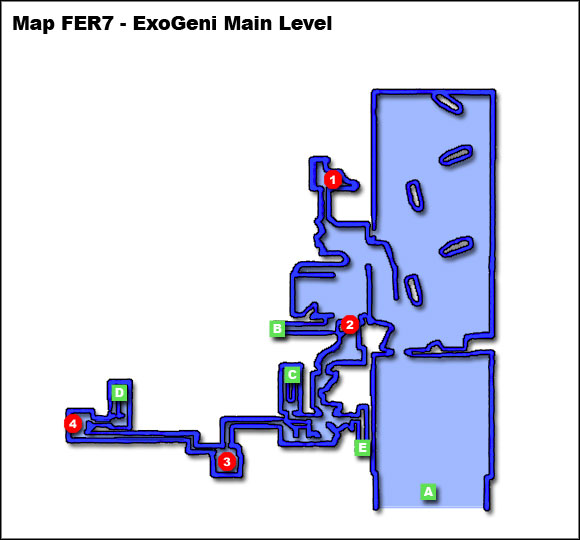 A. To the Skyway

B. To the ExoGeni Refuse (oneway passage!)

D. To the ExoGeni Refuse 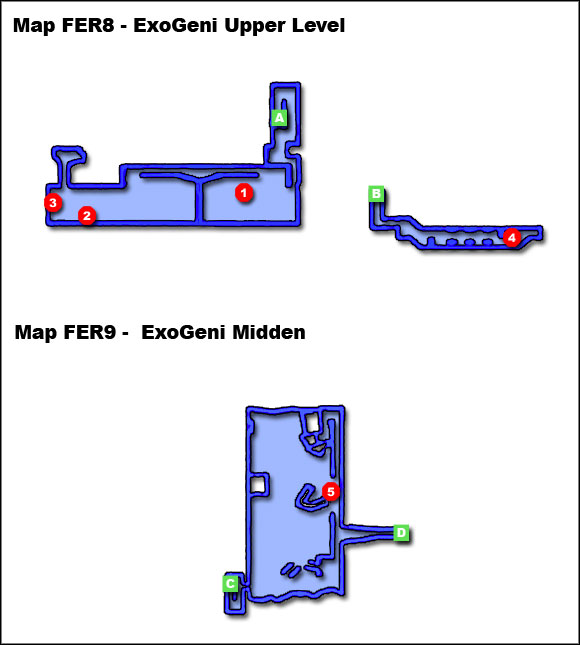 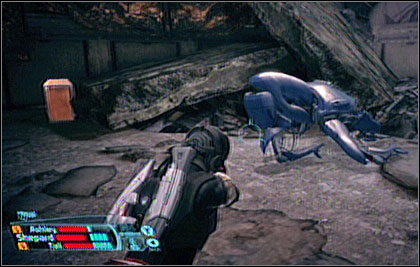 Leave Mako and continue on foot. You'll see a door on the north. It leads to the room with armature (FER7-1). It won't attack you though unless you grab the loot in the crate. If you want to get it, it's good to eliminate it first. Back to the corridor and start fighting but don't lean too much. Robot will awake and attack you. Avoid his plasma attack at any cost. After eliminating it, you could take the loot and turn back.

Soon you'll reach an energy field (FER7-2) which is blocking the way, but jump down to the corridor leading to the refuse (FER7-B).

You'll find Lizbeth Baynham there. Talk with her to find out that the field is powered by geth spaceship which is situated near the building. The only way to deactivate it is to cut off the connection between them. It will not only give you a way back, but you'll also learn what geths are looking for in the ExoGeni facility. You can also tell Lizbeth that her mother is alive. She will decide to help you and give you pass card, which will allow you access to the facility.

After the conversation, varrens will attack you. Stay in motion and killing them shouldn't be much problem. It's good to use telekinesis (throw, lift) to get rid of them quickly.

After killing the varrens, go up the stairs (FER9-C) to return to the ExoGeni main level. At the top of the steps there will a krogan commander trying to obtain restricted information from a VI interface. He will become alerted to your presence and attack. He'll be a tough opponent, so use your most powerful attacks to eliminate him quickly. After the fight, thanks to Lizbeth pass card, you can talk with VI. It will tell you about Thorian abilities and other things. Then deactivate the field and come back to the Zhu's Hope. 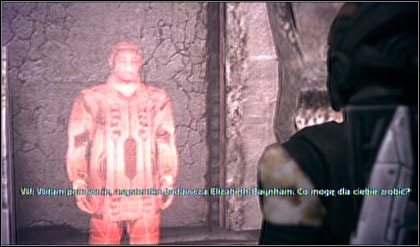 Continue along the corridor. There will be a few geth shock troopers to fight, after which you can examine the strange glowing orb (FER7-3) they seemed to be praying to. If you manage to stay unnoticed, you can also eliminate them from the distance (e.g. using sniper rifle).

Go upstairs (FER7-C) to the upper level and clear the area from the enemies.

Now you'll be able to learn new information from terminals (FER8-1, FER8-2) there. It will allow you to get two another assignments (6.3.2. Geth activity and 6.3.3. Investigate samples). Activate the console on the western wall. You'll need to hit the sweet spot by setting the internal pressure to be between 31 and 34 pounds per square inch. You can do this by activating a number of smaller controls which each provide a fixed amount of pressure. Activate first, third and fourth switch from the left side (like on the picture). This will sever the power, taking care of the problem with the energy shields. 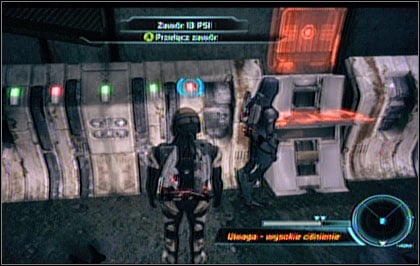 Now you can use the stairs (FER7-E) to get to the eastern side of ExoGeni upper level. There you'll find Gavin's console. You can recover the data from it in order to complete assignment 6.2.2. Data recovery.

Get to the ExoGeni mail level and head to the exit. Force field (FER7-2) isn't blocking the entrance anymore, so you can come back to Mako easily.

You'll meet Lizbeth along the way. She'll tell you where to look for Thorian and then join you. Talking with her can gain you some paragon/renegade points.

Decrypting the geth terminal on the ExoGeni upper level will let you learn about increased geth activity in Armstrong Nebula (13.2.1.1.). It looks serious and can be beginning of a war.

On the upper level of the ExoGeni facility you'll find a terminal (FER8-1) that can be accessed for information on some suspicious ExoGeni activity in the Maroon Sea cluster (system Vostok, planet Nodacrux) (13.12.3.1). The case is worth investigating.

A terminal (FER8-2) on the ExoGeni upper level will inform you about a connection between ExoGeni and Cerberus. You'll need to investigate the Matano system (Maroon Sea cluster) (13.12.2.1) to learn more about this partnership.