At the bar in club Flux you'll meet waitress named Rita (C4-2). She's unhappy about her sister Jenna working as secret C-Sec informant in Chora's Den (C6-1). If her employers found out about her activity, they would surely kill her. Rita will ask you to talk sense into Jenna.

Jenna stands behind the bar in Chora's Den (C6-1). Talk to her just to find out that she don't want to hear preaching.

On your way out you'll meet Chellick who will whisper in your ear some interesting information. If you want to help, meet him at the C-Sec Academy. 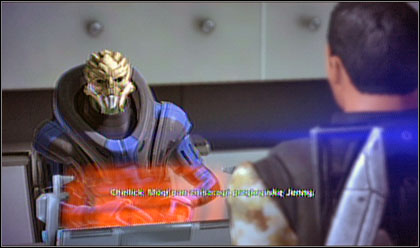 Go to the C-Sec Academy (C3-1) and talk with Chellick. You'll learn that Jenna is working on a serious case and if you want to save her from danger, you'll have to play agent yourself. You could try to persuade Chellick (charm/intimidation), that he doesn't need Jenna or take the assignment.

If you choose the latter possibility, you must pass yourself as buyer and get weapon from the trader named Jax on the Lower Markets (C6-3).

Buy the weapon and bring it to Chellick (C3-1). This way Jenna could still work and the mission is completed.

Examine the ambassador's Udina computer (C1-1) to receive an assignment about some unusual energy readings detected in the Argos Rho cluster (system Hydra). Go there and check it by yourself (13.1.2.1.).

After rescuing Tali and leaving the embassy (3.1. Expose Saren), you'll be accosted by Samesh Batia. His wife was killed on Eden Prime and the Alliance doesn't want to return him her body. He'll ask you to convince Mr. Bosker, who is in charge of this case, to let him bury his wife appropriately. Bosker is in embassy lounge (C1-3).

You can use charm/intimidation to convince him to return the body. There's also another way to complete this assignment. After speaking with Bosker, you can tell Samesh why Alliance needs body of his wife. If you uses charm, he'll understand it. It's good to have Ashley in your squad then.

While visiting Flux once again (after finishing 3.11. Rita's sister) you'll witness a scene: security guards throws Schells out of the club. Talk with him (C4-3) to find out that he's working on developing a device that can be used to cheat at Quasar. He'll ask you to help him by using the device to win five more games for him. You can take the device and win several times at the casino (C4-1) (but no more than seven or else the owner will become suspicious and throw you out). Then give the device back to Schells. This way you'll gain some renegade points. If you want to play as paragon, take the device as well, but speak with the owner (C4-1) and give it to him. 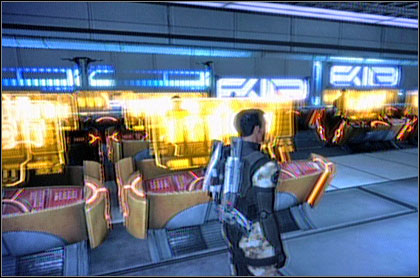 In the C-Sec waiting room (C3-2) you'll overhear an interesting conversation. When it will be over, you can talk with Jahleed to learn the details. This way you'll get another assignment. You need to find out whether Chorban is in fact after Jahleed. You should speak with Chorban who is on the lower markets (C6-3).

It will turn out that this is the same alien who asked you to scan the keepers. If you took assignment 3.7. Scan the Keepers earlier, he'll tell you that Jahleed is needed to analyze data which you'll collect. If you decide to help, you'll have to return to Jahleed and tell him about everything. When he'll find out that he has more accomplices, he'll decide to forget a grudge against Chorban.

If you didn't speak with Chorban before (3.7. Scan the Keepers), you must be ready to fight. Only after killing his bodyguards you could learn the truth.

Hint! If you didn't scan all keepers to this moment (3.7. Scan the Keepers), you can still do it, but you'll gain renegade points. Paragons should resign or finish the assignment earlier.

After gaining Spectre status (3.1. Expose Saren), while riding the elevator you'll hear a radio Messager about a survey team missed in Hades Gamma luster. You should find out what happened with them (13.7.1.1).

Hint! If you play as paragon, you should refuse her. Blake will give you coordinates nevertheless and you will gain some morality points.

A hanar evangelist is arguing with a C-Sec Officer on the Presidium near the elevator to the Wards access corridor (C1-10). Talk with them to find out that the alien is a prophet who tries to disseminate his beliefs in public without permission. Your task is simple: you need to convince hanar or officer to stop arguing. Use charm/intimidation here.

After rescuing Tali (3.1. Expose Saren), go to the medical clinic (C7-1) again just to find out that dr. Michel is being blackmailed. Offer her your help. You need to go to the lower markets and speak with trader named Morlan (C6-S).

When you'll tell him that you're here because of dr. Michel, hired krogan will appear. You can use charm/intimidation to convince him to stop bother her or fight him. The latter possibility won't give you any paragon/renegade points though. 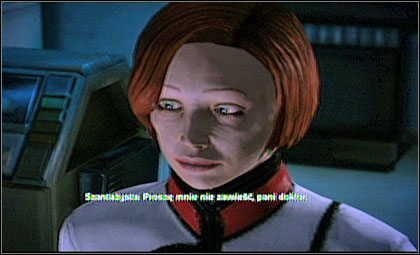 Return to dr. Michel (C7-1) and tell her that she doesn't need to worry any more. You can also ask her about Banes (the krogan mentioned his name). Dr. Michel will tell you that he took some military assignment. Captain Anderson knows the details (you can find him at the docks), but he'll send you to admiral Kahoku (C2-4). He'll give you another assignment (3.20. Missing marines). If you're not interested in Banes story, you can go to Kahoku right away; the effect will be the same.

After gaining Spectre status (3.1. Expose Saren), you'll meet admiral Kahoku in the Tower (C2-4). He sent a recon team to the system where Banes was found to scout the region. This team has gone missing and Kahoku needs your help to find them. You should seek in Artemis Tau cluster, Sparta system (13.3.4.1.).

After completing the assignment return to admiral to give him information about his soldiers.

After gaining Spectre status (3.1. Expose Saren), you'll meet man named Garoth in the Tower (C2-3). If asked, he'll inform you that his brother has gone missing in the Horse Head Nebula Strenuus system, planet Xawin (13.9.3.1). Offer him your help.

After completing the assignment return to Garoth to give him information about his brother.

After convincing the council of Saren's guilt (3.1. Expose Saren), while riding the elevator you'll learn that Chairman Burns has been kidnapped by biotic extremists. Head to the Farinata system in the Hades Gamma cluster and search for the MSV Ontario (13.7.4.1).