In Marvel's Spider-Man you'll be fighting practically all the time - there's quite a lot of bad guys to beat up here. Luckily, Peter is a skilled warrior and in addition to fancy blows, he can also use his gadgets in combat. Below you will find a tutorial on how to fight effectively and how to use the available fighting techniques. 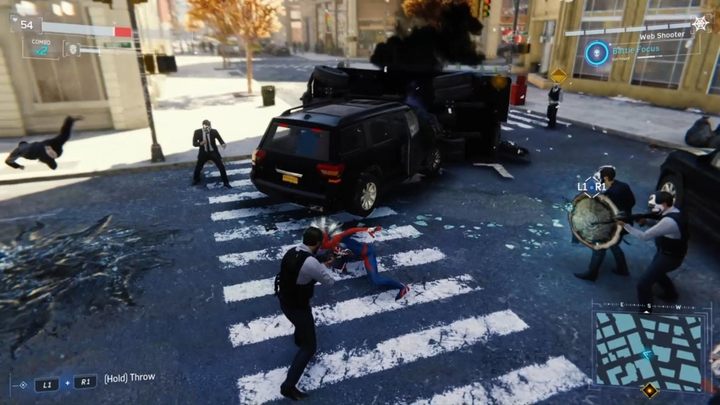 Let's start from the basics, i.e. from fighting on the ground. When you start a battle, you can use the square to perform the basic melee attack. Pressing the square four times will create a combination that will throw the opponent backwards. If you hold the square while in front of the enemy, you will send them flying. You can now continue damaging the enemy in the air when you press the square again, or use the triangle to e.g. throw the enemy.

Square and triangle are the two buttons that you will be relying on the most in combat - remember that the first of the buttons is mainly responsible for attacking, and the triangle for things related to web, web shooting, throwing, etc. 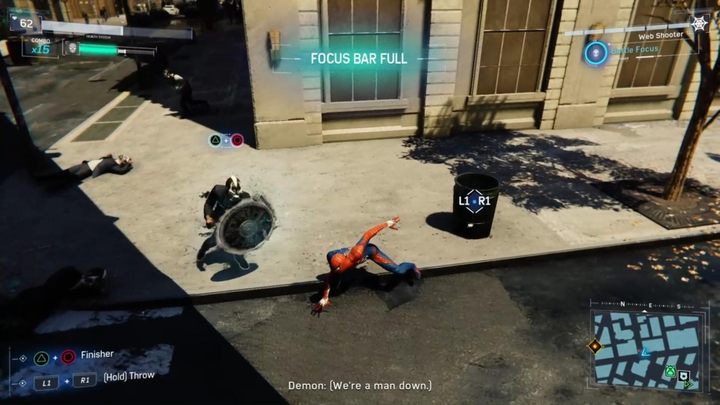 Enemies will not stand idle and will also attack you, mainly using weapons. Luckily, Spider-Man possesses a special spider sense - just before an incoming attack, a glow will appear around the character's head - press circle and Peter will avoid the attack and any damage that may have come with it. Acquire the Perfect Dodge skill as soon as possible, which will further improve your ability to avoid attacks.

In battle you will accumulate Focus - you can then use it to heal yourself (bottom arrow) or use finishers. You can finish off your enemies by pressing the triangle + circle - it's a good way to speed up some battles.

Most locations and combat arenas will be full of additional items such as barrels or pieces of metal. With the help of L1+R1 you can grab items and throw them at enemies. Such attacks quickly fill the focus bar and are especially useful against some types of enemies. 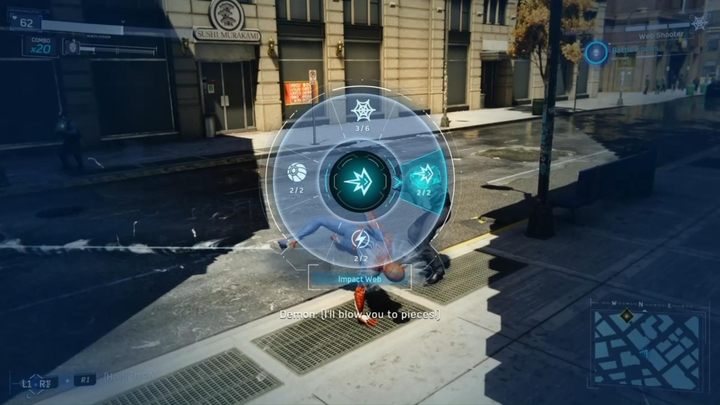 Gadgets also play a vital role in combat. When you hold L1, time will slow down and you will be able to choose one of Peter's inventions. You can use it by pressing R1 - many of them are extremely useful, as they can, for example, stun enemies or stick them to a wall. New gadgets will be constructed in later missions and after completing, among other things, Taskmaster's challenges.

The special costume skills can also be a big help in combat - you can create new disguises that will unlock i.e., area of effect attacks. Like the gadgets, new suits will be unlocked as the plot progresses. And don't forget to buy new skills as you advance to a higher level of experience. Many skills make combat much easier - a list of the best skills can be found in a separate chapter of this guide.

To sum things up, the game offers a really extensive combat system and leaves you free to choose your favorite battle techniques. If you can't handle everything at the beginning of the game - give yourself some time and try to complete some side missions. There's also a Move List, which will give you an overview of all possible Spider-Man moves.