This page of the game guide to Marvel's Spider-Man presents a description of the mission titled "The Main Event". This time the level of difficulty increases significantly and Spider-Man must, amongst other threats, face the notorious Kingpin. 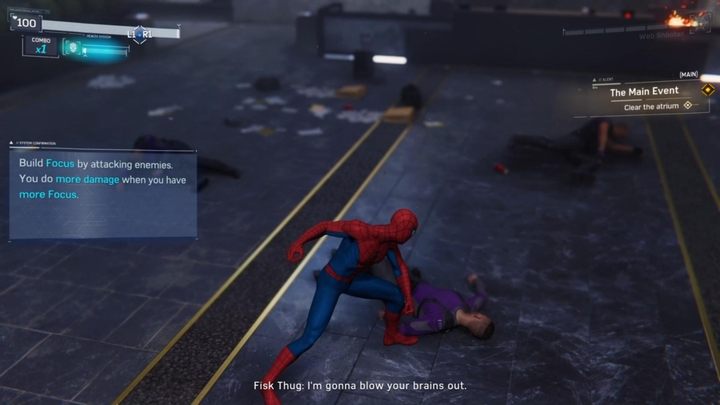 After reaching the building, you will notice a large number of enemies. Go ahead and make your way to them to start a fight. The game will give you information about your character's focus, which allows you to heal yourself and use finishers. Focus can be regained by means of long combos, dodging and attacking in mid-air. Fight with the consecutive enemies - there are quite a few of them, and they all have firearms. Dodging and learning the various attacks that your character can execute should be the top priority for you in this skirmish. 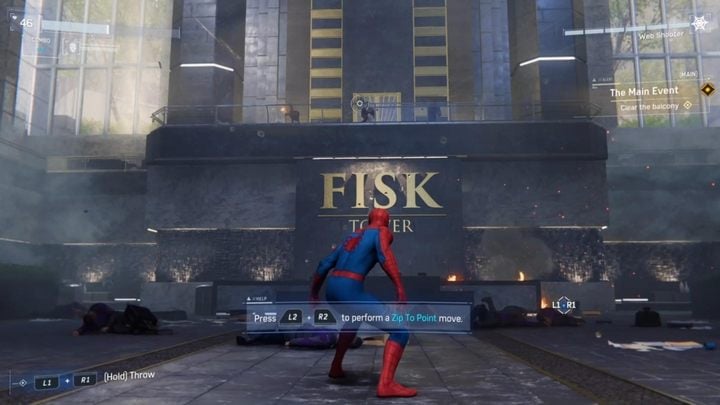 After defeating the attackers, another wave of enemies will appear. Press L2 + R2 to move up a level and start the fight again. After a cutscene, you will reach an elevator shaft - press R2 and run upwards. At the top, enter the shaft and use it to move further. On the other side, you will reach a large hall filled with enemies. 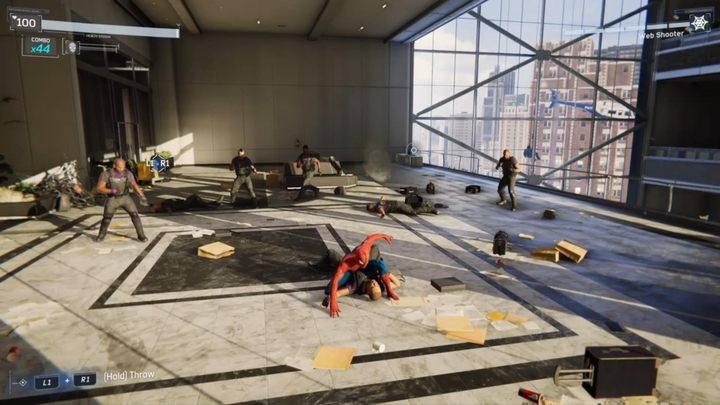 There are a lot of foes here, so remain vigilant and try to heal if necessary. You can also use L1 + R1 to throw objects and quickly refill the focus bar. After winning this next clash, go up and enter the ventilation shaft. Keep crawling through it - when you will be over a grate, use the square button to stun the opponent. Remember this trick - you can often take enemies out without alerting the others to your presence, provided that they do not notice anything. 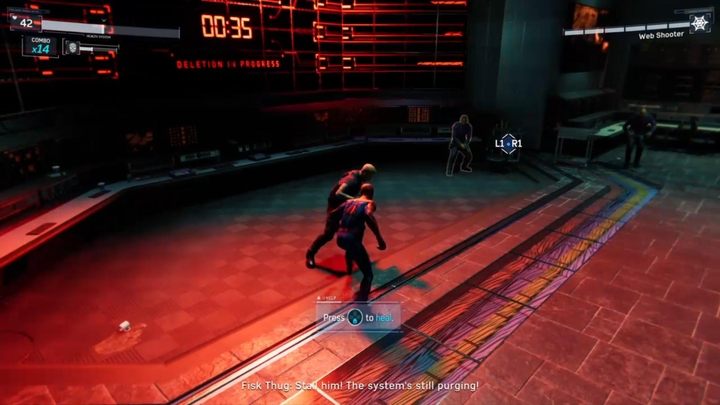 Jump down and you will reach a room with a timer that is counting down. You must defeat the enemies before the clock reaches 0:00 and the whole room explodes. Focus on quickly eliminating single targets and use the web to pin your foes down. After that is done, press the triangle button and turn off the countdown. After a cutscene, there will be yet another group of ruffians for you to deal with. 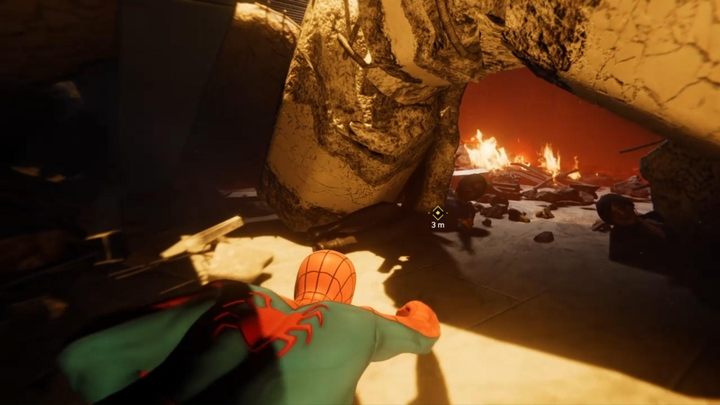 Exit the room, and you will then see an explosion on the level above you. Go there and defeat a group of enemies. Move up higher and enter the room with a fire inside it. Approach the column and use L1 + R1 to move it away and proceed further. Crawl under the narrow passage and save the woman lying under the rubble. 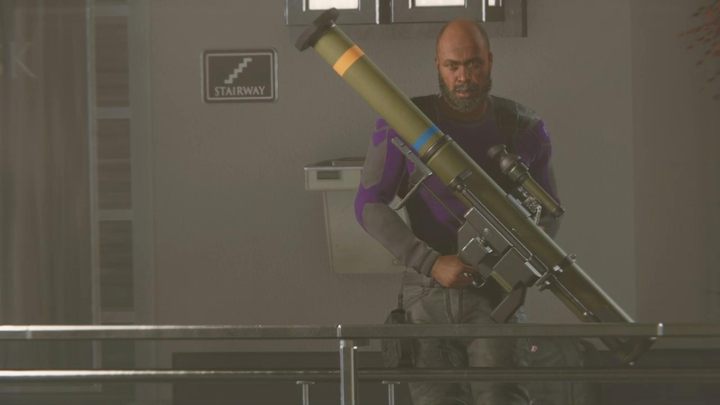 After this heroic feat, go ahead and enter the ventilation shaft. Go further, and after a while, you will reach a room with a new type of enemy. Opponents will be equipped with rocket launchers, which deal a lot of damage. Be sure to focus on dodging and do not let them hit you. 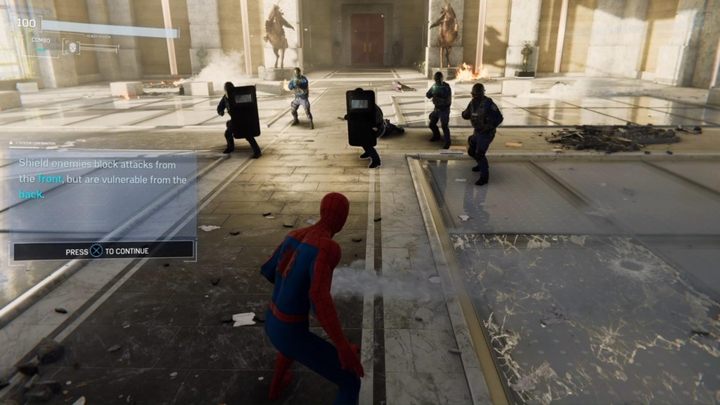 After the fight, destroy the door leading to Fisk and move on. Press R2 and move the stick to run forward, which will make Peter use his parkour skills in order to proceed further. Once again, you will encounter a group of enemies, deal with them quickly and keep moving. This time you will come across villains dressed as police officers and thus start a fight with a new type of enemy, which will utilize a combat shield against you. This opponent type will block any attacks from the front, press the circle button on your controller in order to go under their legs and safely attack them from the rear. 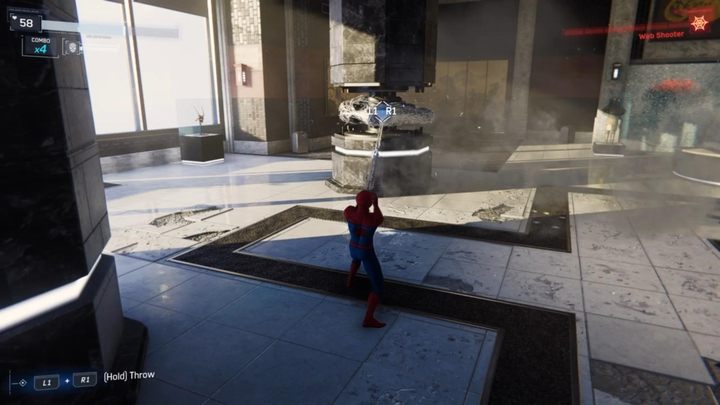 After the fight is over, run to the red door, and eventually, you will reach Wilson Fisk, the mafia boss who is the person responsible for all that has taken place. The first phase of the fight is based on destroying turrets. Avoid the heavy rifle fire, then use L1 + R1 to snatch the turret and launch it into the boss. Repeat this action several times and the second stage of the fight will begin. 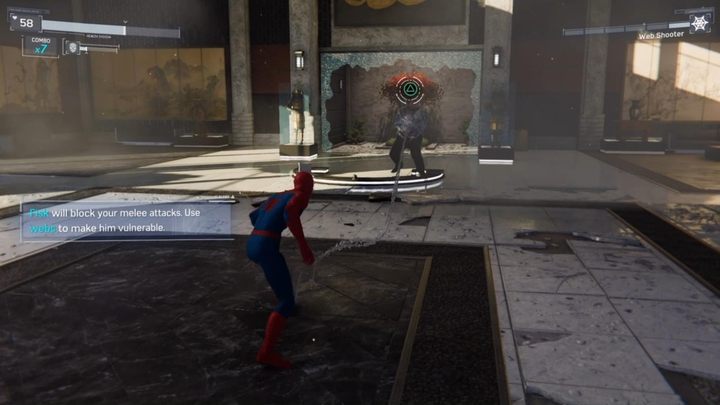 Kingpin is a real beast who has unbelievable strength. Catch the objects which are thrown at you and launch them back at the enemy, with the help of L1 + R1. Then use your web to weaken the enemy and finish the sequence by pushing the triangle button. Be careful of the boss's strikes, as they deal more damage than ... firearms. 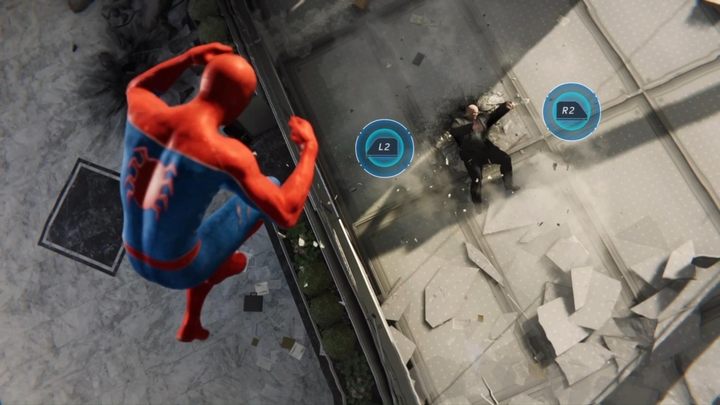 After a while, you will both move on to the next room and start the third phase of the fight. The mechanics of the duel will not change - the only addition is an additional wave of enemies. Focus your offense on the newly arrived cannon fodder, while paying close attention to the boss's powerful charge. When the fighting arena is clear, return to Fisk and use your web + throwing objects technique from the previous stage of the fight. In the end, there will be a short sequence of buttons on your screen which will finish the job when executed. 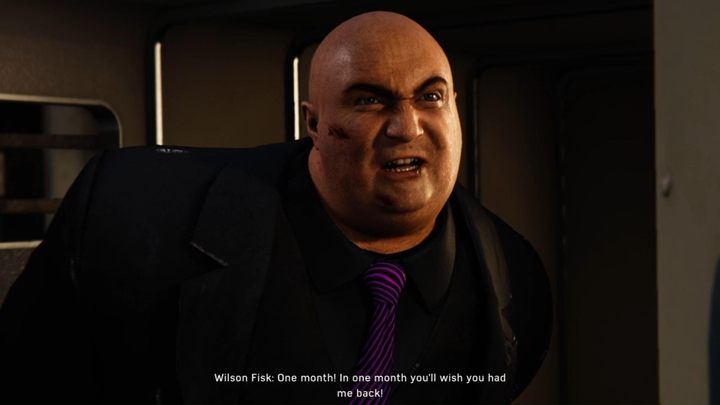 After the fight, the Kingpin will be thrown into prison and the mission will end in a success.