This page of the guide to Marvel's Guardians of the Galaxy contains a walkthrough for Mission 8 (The Matriarch). The walkthrough explains how to distract the Grand Unifier Raker, how to get through the farmstead and birthday party scenes, how to defeat the cultists and how to reach the Milano.

For more information about the location of the secrets in Chapter 8, check the Secrets and collectibles chapter. All collectibles are marked in green. 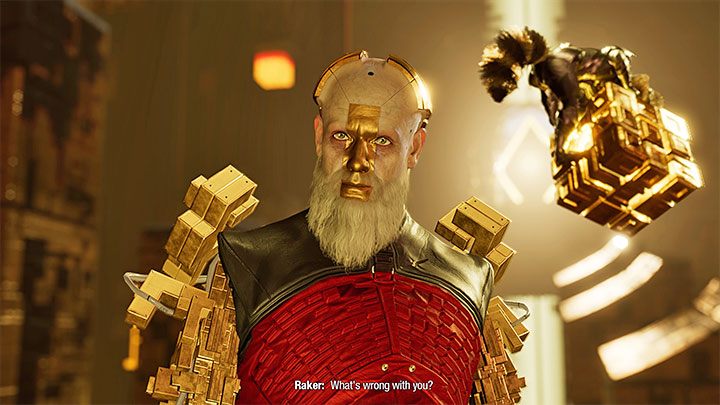 You begin this chapter on board of the Sancrosanct, with the team being led by the Grand Unifier Raker. You'll reach a flying platform and Rocket will ask you to distract Raker while he's trying to hack a drone. You must choose three correct dialogue options to do so:

This segment isn't too important. If Rocket successfully hacked the drone it will help you later on. If you fail the conversation Rocket will get busted before managing to hack the drone, but even then you can complete the chapter without any problems.

Regardless of how the hacking went you'll eventually reach The Matriarch.

The farmstead and the secret ending 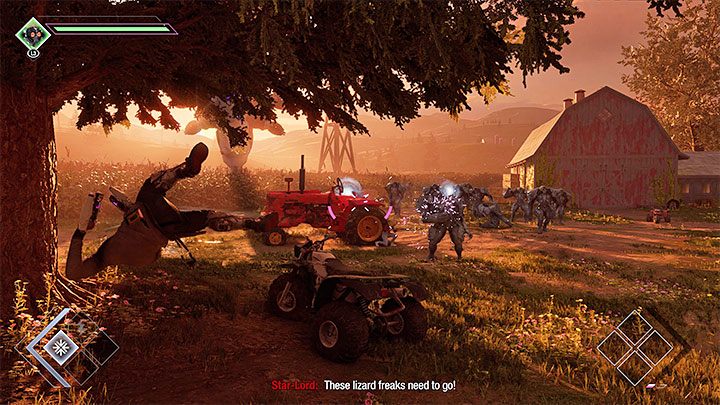 You'll be transported to the Quill farm, but this time you'll be playing as adult Peter. You must defeat the enemies attacking Meredith.

Interact with the window to break it and start shooting the monsters with your blasters. You can't use any abilities or elemental attacks but this battle isn't very difficult anyway. 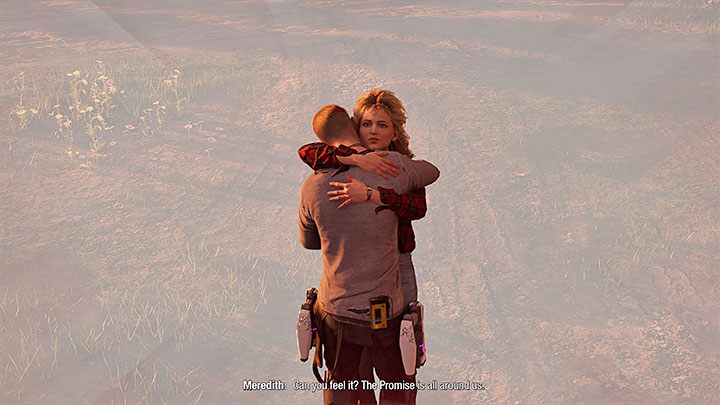 As soon as you win the battle, you will be faced with a choice. The first option involves playing out the events according to plan, starting with hugging the main character's mother.

Additional scenes will play out, during which you will be able to visit the Quill family home again and interact with the other Guardians of the Galaxy residing in the house. At the same time, the edges of the screen will become increasingly distorted, signaling that something is wrong. 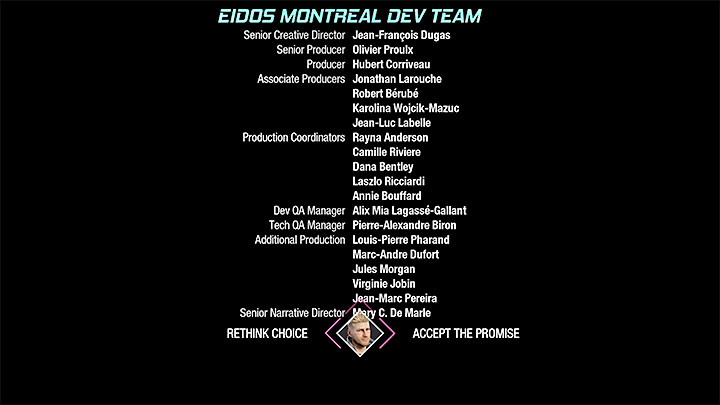 Once enough time has passed, Peter will end up fully enslaved and the end credits will be displayed. You can confirm your willingness to accept the Promise to unlock the unofficial hidden ending (unfortunately, this won't earn you any additional trophies or unique rewards) or choose to rethink your choices and restart the farmhouse "visit" scene. 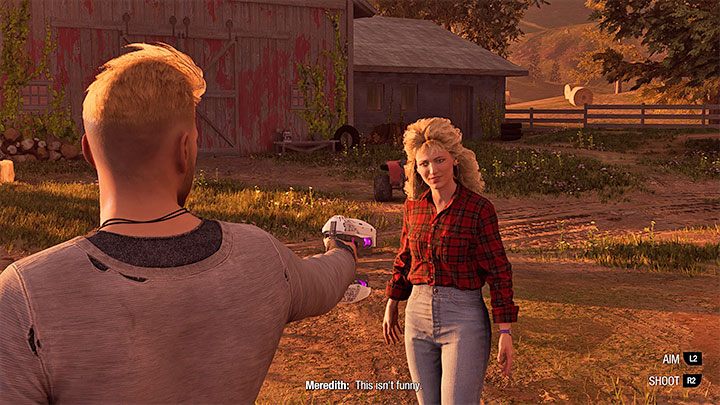 The second option requires you to see through the illusion and realise that the main character is being subjected to a gradual "brainwashing". After defeating the group of opponents, aim your blasters at Meredith and continue shooting. Finally, press the interact button. By turning against Meredith, you will successfully complete this scene, which is required to further progress the main story. 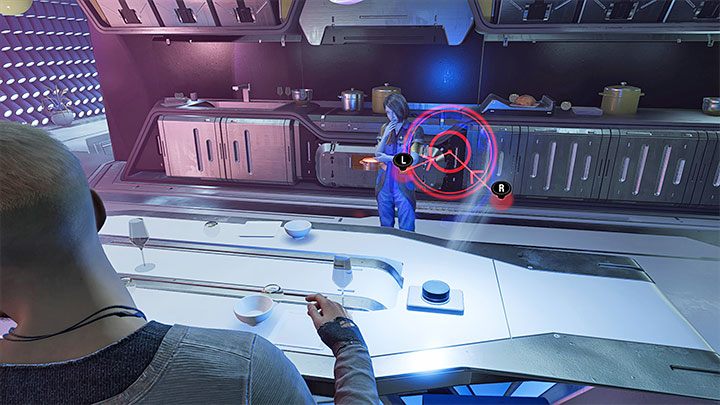 Another scene will start, one that's supposed to remind Peter about Ko-Rel's birthday party. Go to the kitchen and talk to Nikki - choose any dialogue option you wish, examine the birthday cake and turn on the projector (with a button on the kitchen table). You must calibrate the projector with a familiar minigame of moving cursors (left and right analog sticks), then pressing R1/RB. 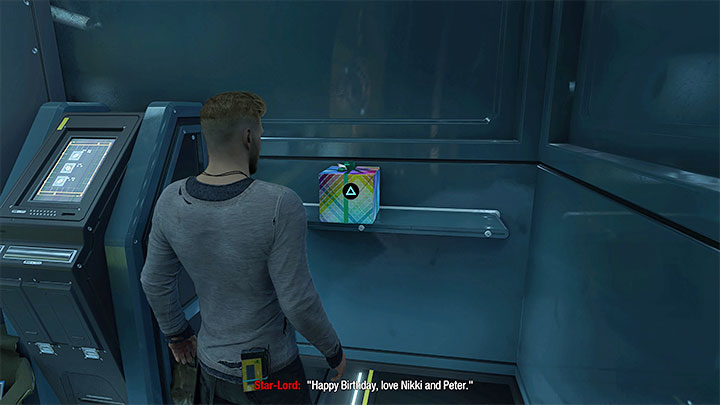 Go to Nikki's room and take the birthday gift to the right of the exit. Take it to the kitchen and place it on the counter nearby.

After you hear knocking, walk towards the office's front door to trigger a meeting with Ko-Rel. 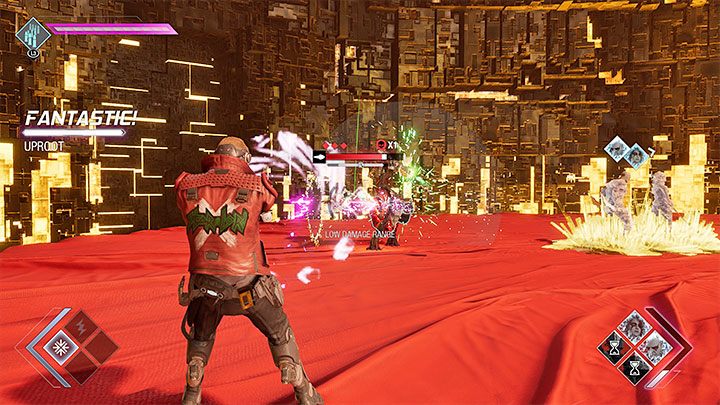 Be ready for some intense combat immediately after returning to reality. You'll immediately start off fighting Raker, but he can't be defeated just yet and won't be using any of his unique attacks. The Grand Unifier will leave the battlefield shortly after.

From this point on you'll have to fight other enemies. Remember to use lightning against groups of foes vulnerable to this element. Pay attention to regular Unifiers. You should focus on one at a time. Attack the Unifiers not surrounded by forcefields, filling their stagger bars to dispatch them more efficiently. 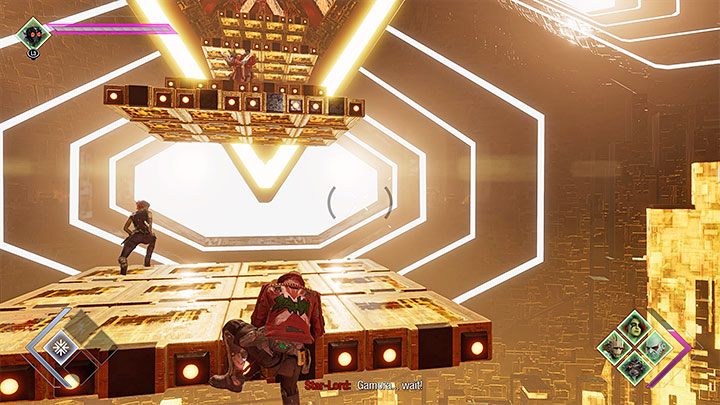 After the first battle run towards the levitating steps. Double jump across them. New enemies will appear on the distant steps. They're not difficult to kill, but watch out - they can push you off the platform to your death.

After reaching the top you must start running away from the scanner - keep running forward without stopping.

Reach a comm center to call the Milano 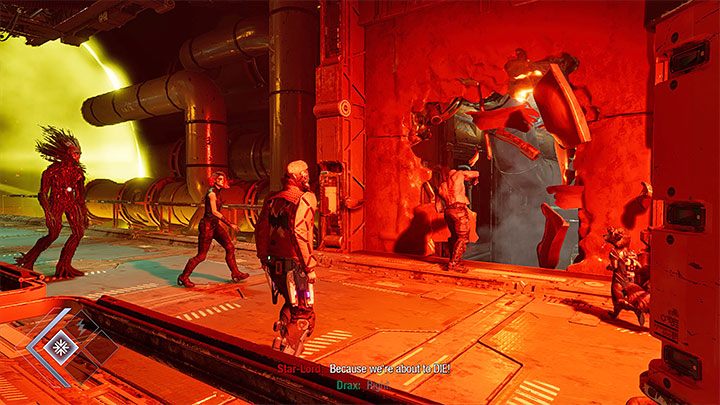 The chase will end after a successful jump. In the new area locate a weak wall with your vizor and ask Drax to break through.

Jump into the tank containing a red substance like Drax did and go down. Here you can ask Drax to move the right block to the place you've landed in after the slide to reach a secret - Outfit: Bad-Lord - Star-Lord. 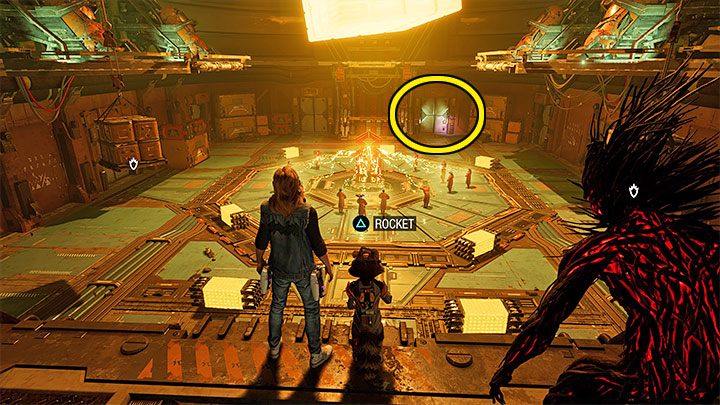 Continue along the main corridor until you reach an altar hall with many enemies busy transmitting power. Your task will be to locate the exit from this room. You won't be able to defeat all of the opponents in this location, as reinforcements will constantly spawn.

If Rocket managed to hack the drone before, it will fly towards the exit and show it to you. If you failed the hacking attempt, you won't get this hint. Fortunately this isn't a problem, as the exit is always in the same place - in the far right corner of the hall, as shown on the picture. It's best to head there immediately without trying to fight any of the opponents. 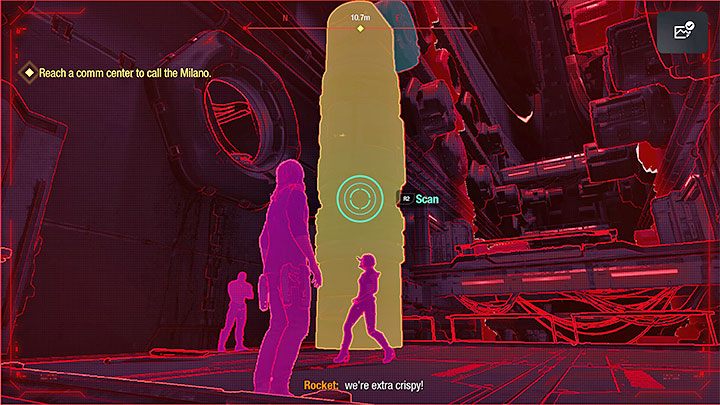 Defeat the enemies in newly explored corridors. A new security drone will appear and once again you must act quickly to avoid death. Scan the big pillar shown on the picture and ask Drax to push it over. Find shelter in the newly created hole in the wall.

You must keep going down corridors and squeezing between partially opened gates. Defeat the cultists and move on. Eventually you'll reach a door with a control panel Rocket must hack. You'll enter the communication centre. 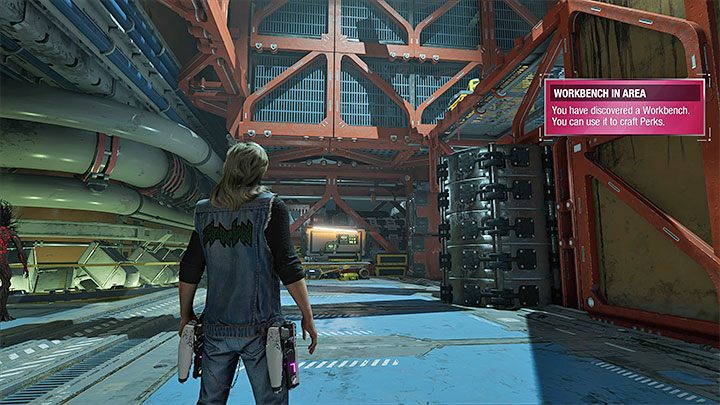 After the cutscene don't leave the comm centre just yet as there's a new secret to find - Archives: Re: She Has Come!.

Use the new passageway and after reaching the workbench corridor (pictured above) climb up to the right to find a Guardian Collectible: Deep Mine Device. 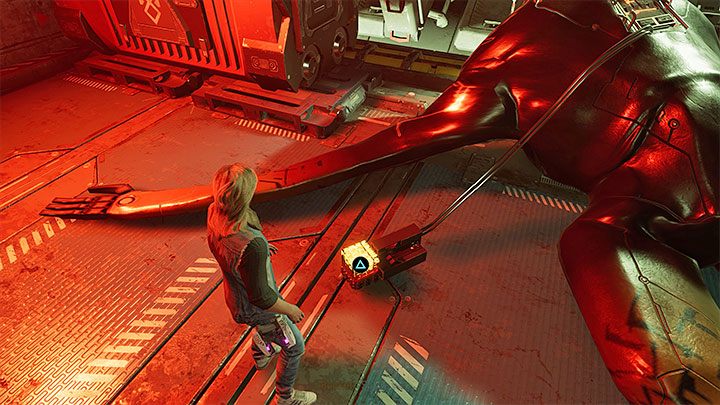 In one of the following areas you'll have to find a battery to open the way forward. Continue down the same corridor. You'll find Archives: Notice: Malfunction and the pictured yellow battery. Take it back to Rocket and insert it in the slot.

Rendezvous with the Milano 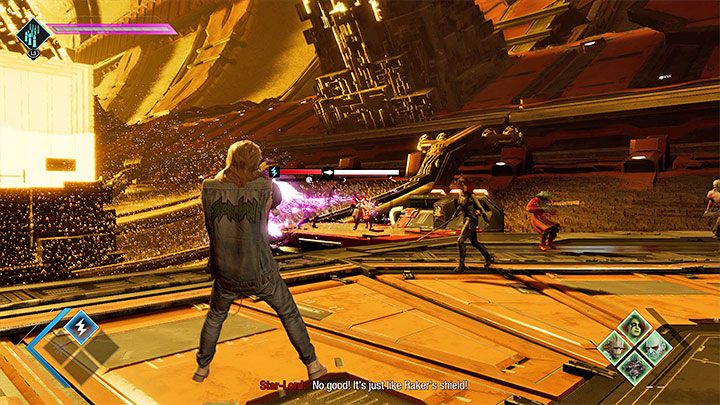 After almost the entire team enters the elevator you must talk to Drax and convince him to do the same. The elevator will take you to a crowded hall.

The first group of enemies will come here on a flying platform, and you can start shooting them even before they stop. Remember about using lightning attacks. 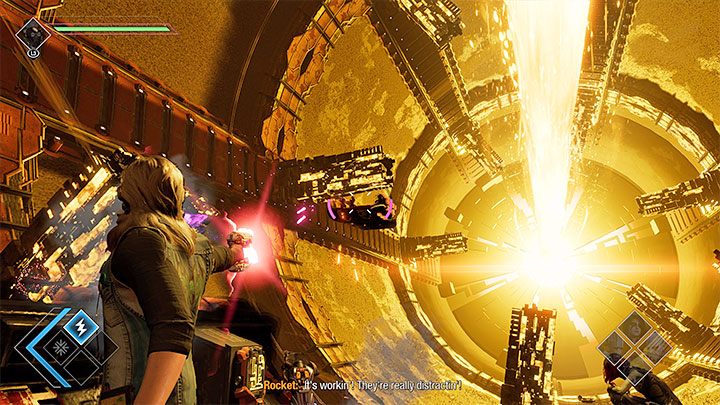 After winning the battle climb onto the same platform the enemies were using. It'll automatically start moving. You must win several battles with similar rules:

The final flying platform will take you to a shaft-like area. The final collectible of the chapter can be found here - Outfit: Cage Match - Drax. 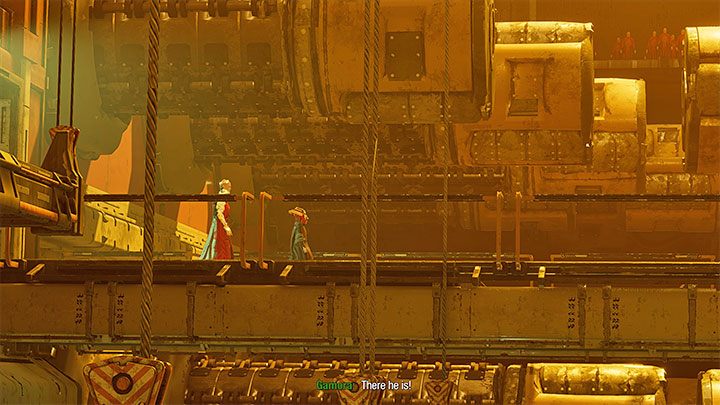 Go down the new path, fighting along the way. Finally you'll reach a room where you'll spot Raker in the distance. You must make an unusual choice here:

We've described this decision in more detail in the Important choices chapter, on the page regarding mission 8. 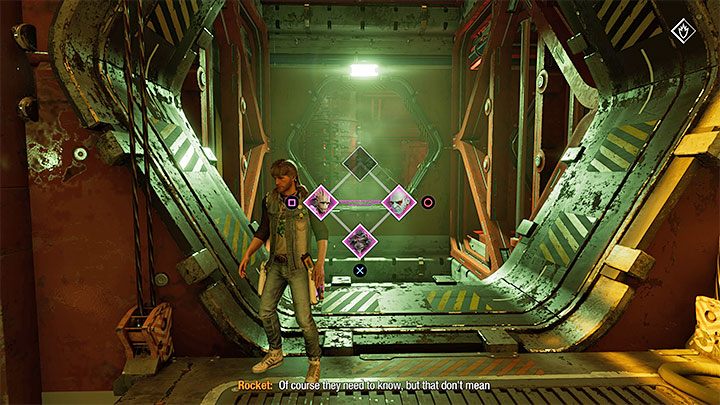 No matter your choice you'll have to fight some new enemies - if you let Gamora go after Raker you'll only have three party members until the end of the chapter. When fighting Unifiers focus a single one, destroying their shields.

After the battles ask Groot to create a bridge which will take you to the sewers. You must, once again, run from a security drone. Keep moving forward, don't worry about slowing down as you enter the tanks of red substance. 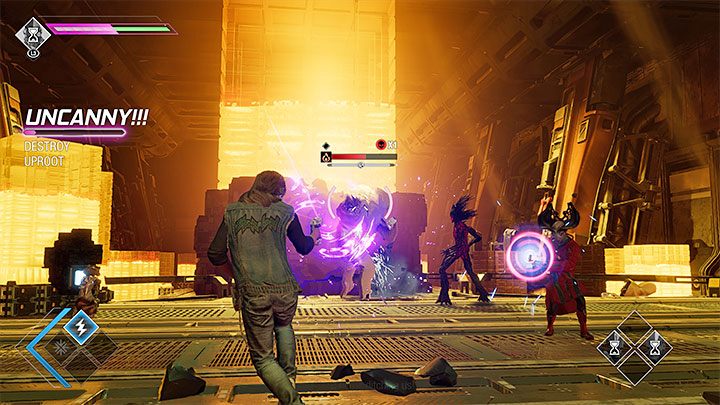 There are new enemies in the next areas - watch out for the snipers and remember you can send Drax after them once his ability activates. You'll reach an area where you'll have to protect Rocket as he works on two panels. This could be a bit more difficult if Gamora's not with you, as you'll have only Drax and Groot to help.

Once an Inquisitor appears use abilities which let you fill its stagger meter - always keep moving. When fighting regular enemies try to spot where they're spawning and use AoE abilities on them before they spread out. 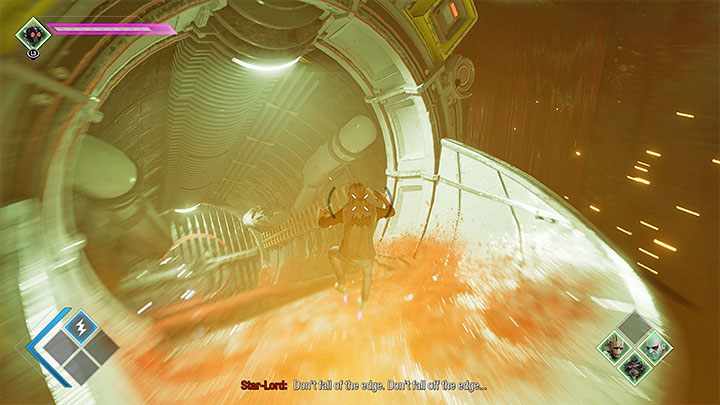 After you deal with the enemies and Rocket finishes hacking, you'll have to go through a long sliding section. Pay attention to wide gaps - use double jumps to avoid falling and land in new tunnels. The chapter concludes shortly after.