This page of the guide to Marvel's Guardians of the Galaxy contains a walkthrough for Mission 6 (Between a Rock and a Hard Place). The walkthrough explains how to get through the marketplace, how to successfully complete the meeting with Lipless, how to win the boss fight against the Blood Brothers and how to meet Cosmo.

For more information about the location of the secrets in Chapter 6, check the Secrets and collectibles chapter. We've marked all collectibles with green. 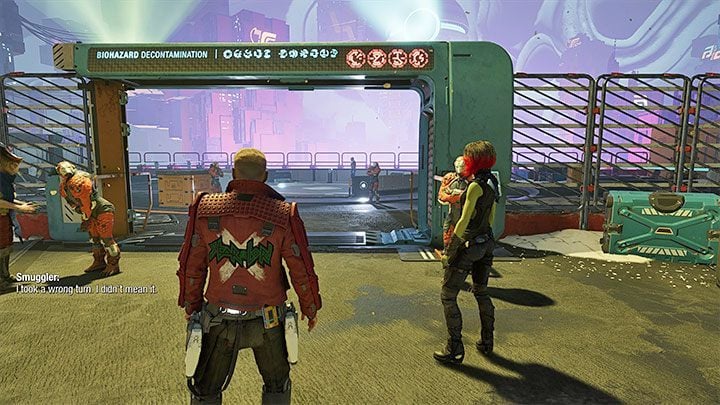 Just like in previous chapters you can spend some more time on board the Milano and talk with your teammates or immediately head to the captain's bridge and fly to Knowhere. Leave the ship to find yourself in the arrival zone at the docks.

The large area in front of you actually has only one exit - head towards the large round elevator leading to the marketplace. 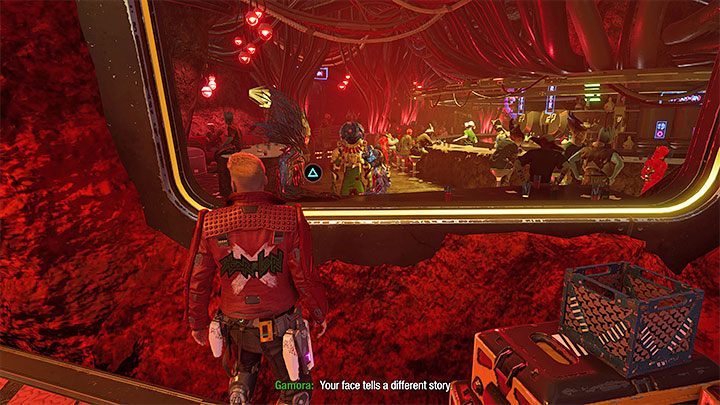 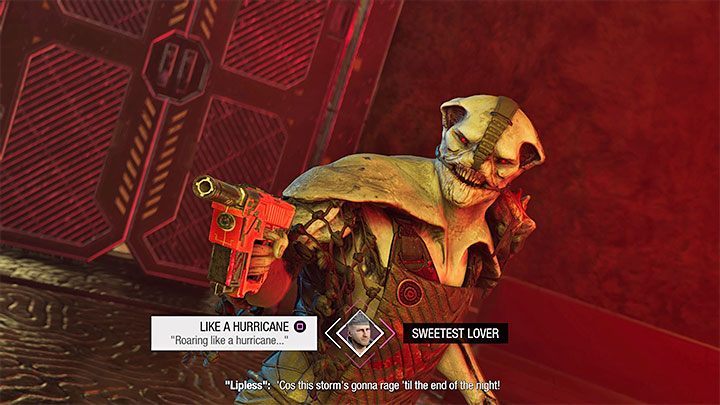 Your initial journey through the marketplace is linear as well, not containing any secrets. You'll meet Mantis on the way, as well as walk past a bar where Rocket and Groot are. You don't have to enter the bar, but we advise you do so. You'll meet Lipless inside the bar and you must choose correct dialogue options to correctly finish the meeting:

If you sang the song correctly, Lipless will give you a gift - a ticket to the Collector's Emporium. We've described its use later on. There's also a collectible inside the bar - Archives: Egghead Reviews: Mant-Blows.

We've described the meeting with Lipless in more detail in the Important choices chapter, on the page regarding mission 6. 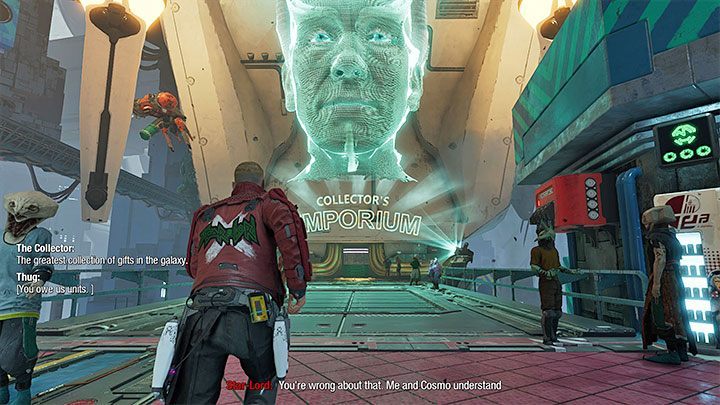 The second area of the marketplace contains many optional activities we've described in more detail in the Secrets and collectibles chapter. One of the more important activities is visiting the Collector's Emporium - you can enter by showing the ticket you got from Lipless or by (which is not recommended) paying 5,000 credits. At the end of your visit in the Emporium you can purchase a souvenir - Guardian Collectible: Collector's Emporium Doll.

We strongly recommend not to spend too many credits on the marketplace - don't go below 7,000 or 8,000, depending on how high your Chapter 2 fine was. Only then will you be able to pay off the fine later on, obtaining an achievement.

Before you progress further examine the corridor leading to the sewers to find Archives: Overheard. 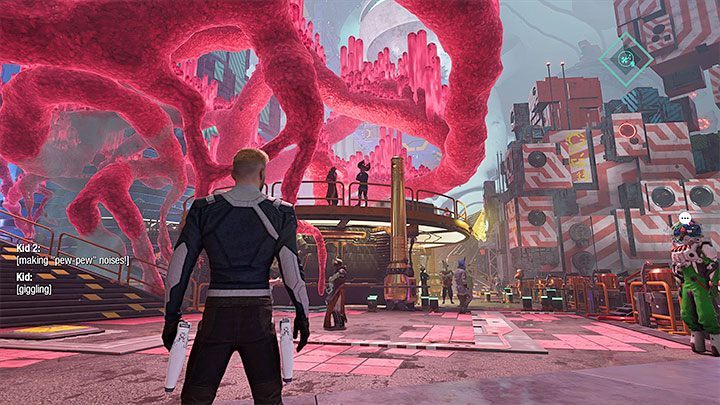 The next public area you must go through is the one with the Spirit Tree. Here you can: 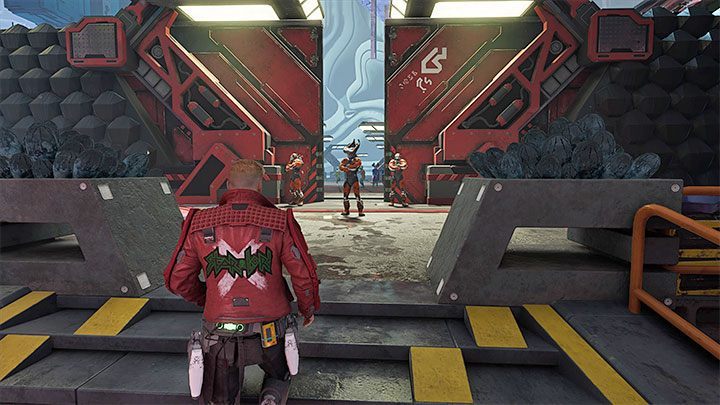 Your objective is to reach the pictured guarded passageway. They won't let Star-Lord enter Cosmo's tower, ordering you to go through the alley on the right.

You must overcome a simple maze which shouldn't bring you too much trouble. Eventually you'll reach an arena where the boss fight against the Blood Brothers takes place. 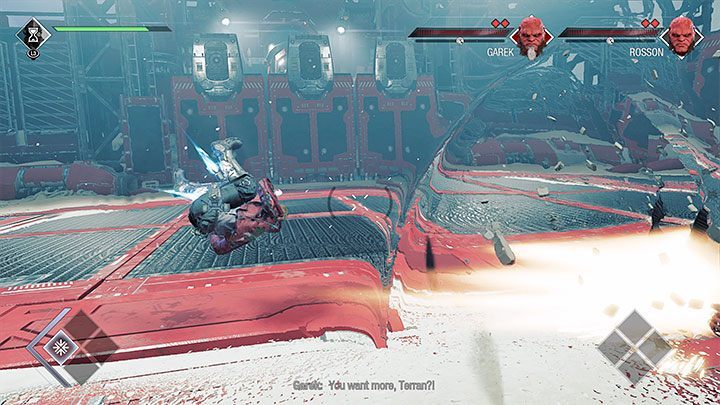 The first part of the battle is not a proper boss fight but a survival trial. You cannot weaken the brothers, because they have special armor that makes them invincible. You won't be able to deactivate them in the first phase.

Your only tactic is to run around the arena and avoid bosses' attacks. They deal serious damage. However, they are telegraphed so you can dodge them. 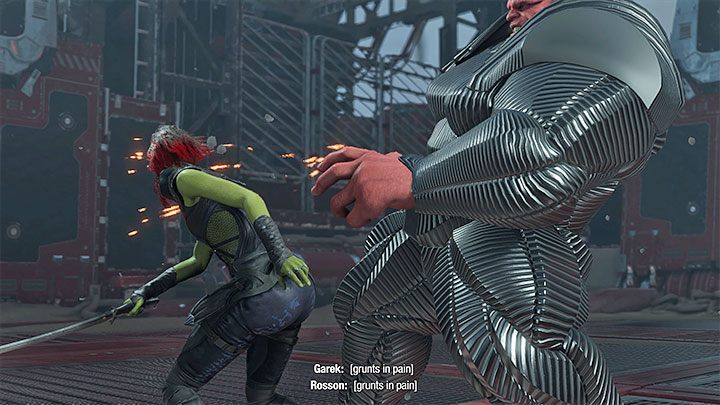 You must defend yourself until Gamora appears. You will now be able to weaken the brothers. 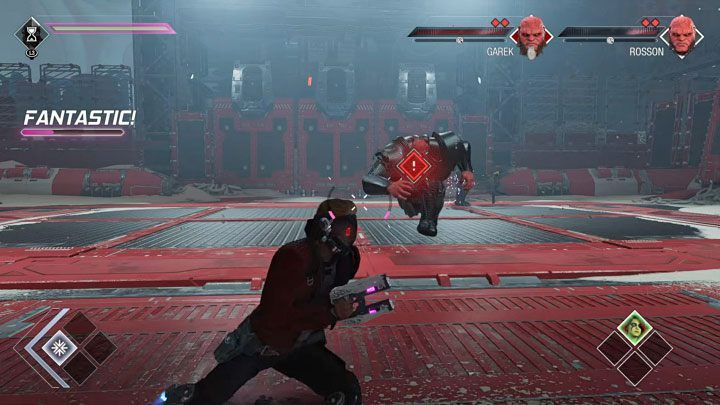 The most important premise of this battle is that brothers can only be attacked when they are far apart. This can happen spontaneously or, for example, after provoking one of the bosses. One of the brothers can jump or charge - both of these actions are signaled by an exclamation point icon. Don't forget to dodge them. 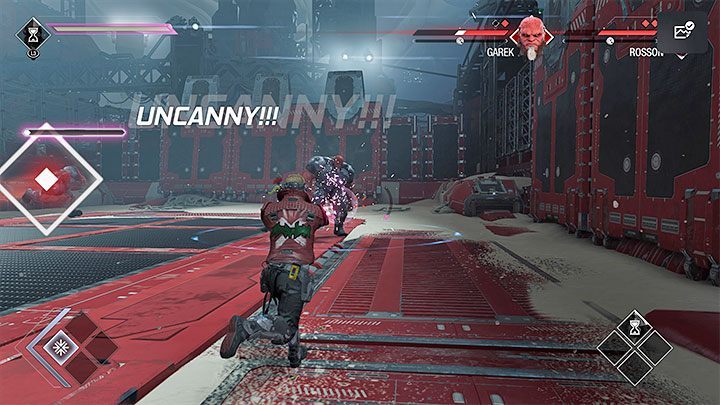 The separation of the brothers will deactivate their armor temporarily. After that, you can start attacking. Try to focus as much as possible on one of the opponents. Shoot the blasters and use Star-Lord's and Gamora's abilities. 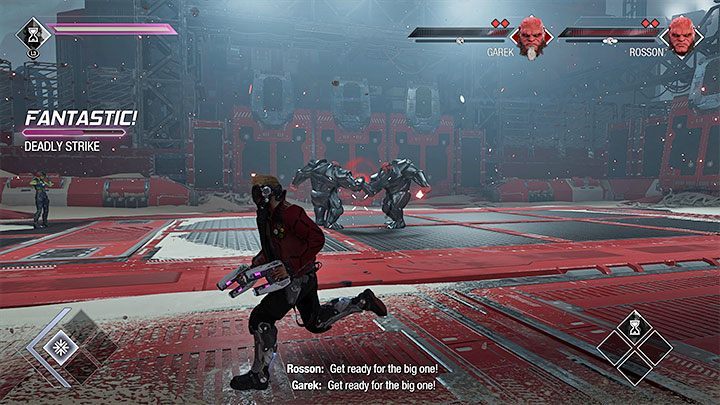 The brothers will approach each other from time to time to heal some of their wounds. Unfortunately, you can't interrupt this - you can't win this battle now. Just continue fighting and wait for the third phase of the battle to start. 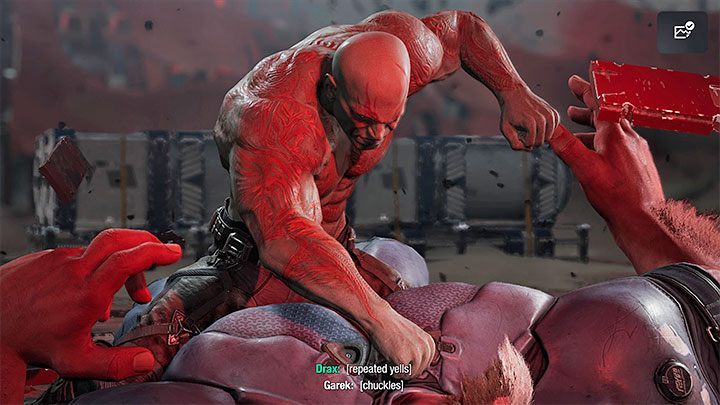 At some random moment, you will trigger a new cut-scene. Drax will appear in the arena - from now on, the three of you will work together. 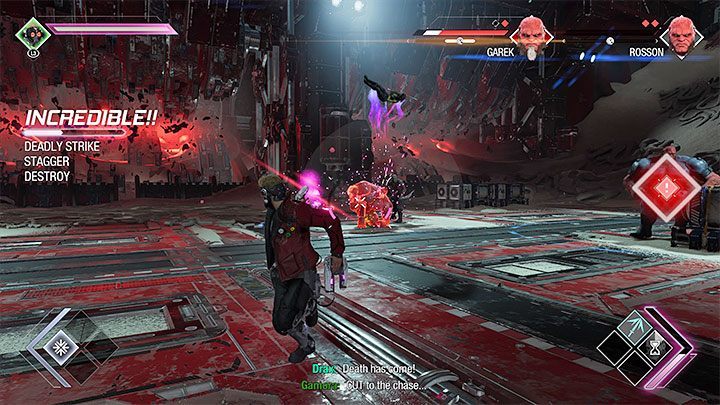 The third part of the battle will not surprise you with anything new - provoke the brothers to split up or wait until it happens spontaneously. Then attack one of them (you can lock the camera on him) and use the abilities of all 3 Guardians to weaken that opponent faster.

This battle has no traditional ending. At some point, there will simply be a cut-scene, followed by another flashback. 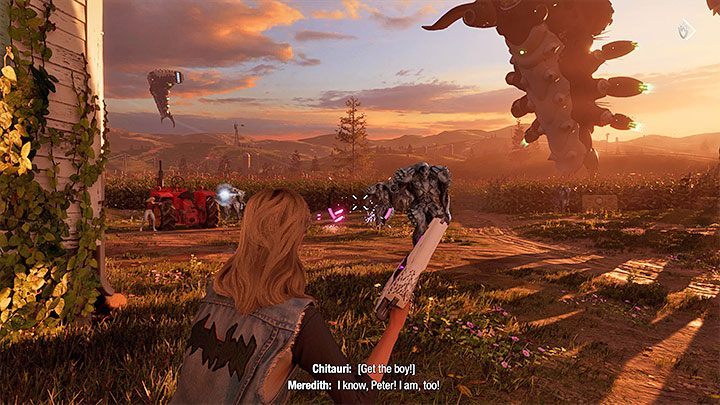 You must go through yet another flashback during which you'll play as young Peter Quill. It starts identically to the previous flashbacks, which means you must reach the gift box in the bedroom. This time you'll be able to open the box and find blasters inside.

After the cutscene go to the ground floor and use the back door to run out of the house. Once you're out in the open start shooting the enemies. You must be aware that this battle can't be won - you can't kill them all. After some time more cutscenes will trigger, beginning Chapter 7.