This page of the trophy guide to Marvel's Guardians of the Galaxy features a detailed description of the Fully Loaded trophy. You will get this trophy for investing in all the special skills of every team member. 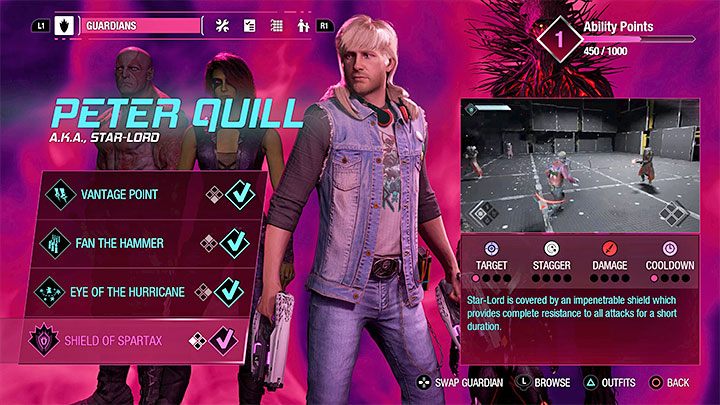 Eventually, all 5 Heroes need to have 4 skills unlocked - an example of such a situation for Star-Lord is shown in the picture above.

The first skill of a given guard is unlocked from the very beginning of the game. The exception in this case is Star-Lord, for whom you must buy the ability as part of the tutorial in Chapter 1 - this is also a requirement to obtain another achievement Self-improvement.

The second and third skill has to be purchased for upgrade points. You get these points for levelling up to the next experience levels, while XP you can get only for combat in the game. Every second ability from the "tree" costs 2 upgrade points, and the third ability 3 upgrade points. This means that you have to spend 5 points on each hero and a total of 25 points on all Guardians of the Galaxy. 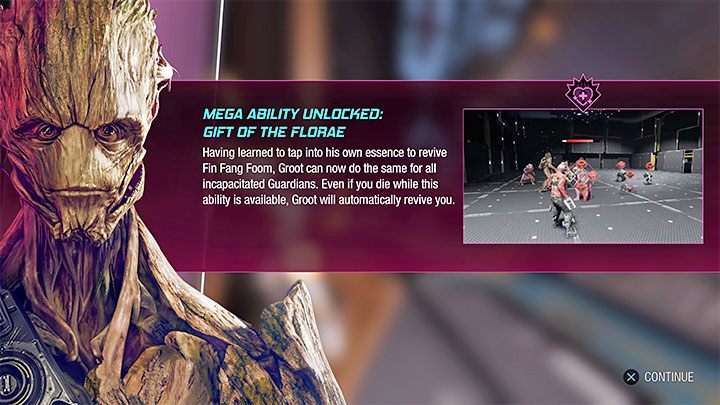 The fourth ability - also called mega ability - isn't bought for upgrade points. You will automatically receive the mega abilities in the final chapters of the campaign. Groot's mega ability will be unlocked last (picture above) - in Chapter 14.

When that happens, you should already have purchased all the "normal" abilities, so you should now get the trophy. If not, keep fighting to collect the missing XP (remember about the bonus experience points for a greater variety of attacks during combat).

Note - Unfortunately, this achievement be affected by a bug, and to minimize the problem, try to update the game to version 1.04 or later. In any of the previous versions you may find that the trophy does not unlock despite unlocking all abilities. It may also happen that you get it a little earlier, e.g. at the end of Chapter 13.